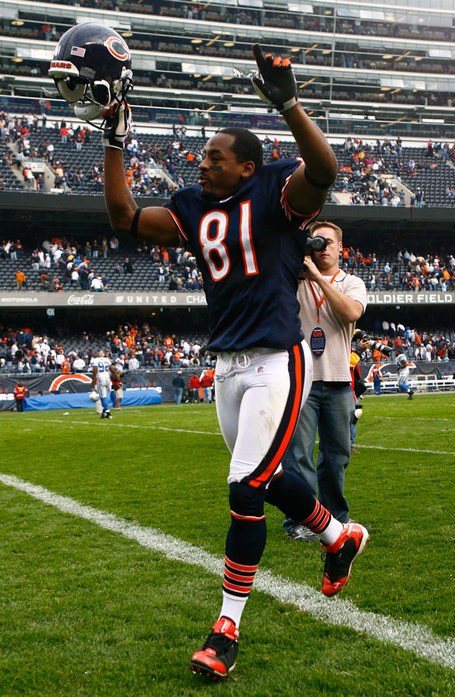 Every week the Lions seem to find new ways to lose, and Sunday was no different.  The Lions put together a tremendous second quarter and got ahead of the Bears 23-13.  On top of that, Kyle Orton got knocked out of the game with an ankle injury.  With Rex Grossman having to come in for Chicago, it was natural to start thinking that this could be the Lions' chance to finally get a win.

Just as the Lions always seem to do, they turned a great opportunity into disappointment and didn't score at all in the second half.  The Bears got into the end zone twice, which was good enough for them to win 27-23.  Despite having Grossman as their starting QB in the second half, Chicago did just enough to come out of this game victorious, dropping the Lions to 0-8 on the season.

Beyond the fact that the Lions lost again and are the only winless team in the NFL, it is so frustrating to know how many little mistakes cost the Lions this game.  Had Jason Hanson not slipped on that extra point, he could have just kicked a field goal on the last drive of the game to force overtime.  Had Orlovsky not thrown an interception at the goal line, Hanson again could have kicked a field goal to make it a 1-point game.  The same goes for when Backus got the false start penalty.  Had he not done that, Hanson could have come in to kick a field goal that would have put the Lions within reach to win the game on the final drive.

Detroit now heads back home to play the Jacksonville Jaguars next Sunday.  The Lions will be celebrating their 75th anniversary during this game and will wear their throwback jerseys.  Hopefully they will bring good luck of some kind.  Kickoff is set for 1 p.m. on CBS, though the chances of another blackout are very good.