Pair of Former Lions Named Rogers in Trouble with the Law

Share All sharing options for: Pair of Former Lions Named Rogers in Trouble with the Law

It's been a bad week for former Lions players named Rogers.

Last week, one-time Lions defensive end Reggie Rogers was charged with drunken driving and hit-and-run.  This was the fifth time Rogers had been arrested for a DUI in the state of Washington, which is both stunning and sad at the same time.  What's even sadder is that Rogers actually killed three teenagers in Michigan in the late 80s when he played for the Lions.  That accident happened as a result of him being drunk as well.  This guy needs to be taken off the road for good.

Another former Lion (and former Michigan State Spartan), wide receiver Charles Rogers, was sent to jail on Wednesday for violating his parole.  He was arrested in September for assault and battery but only ended up with a trespassing charge.  His punishment was to live in a three-quarter house, where he would be partially confined and would receive "treatment and education in lieu of jail," according to The Oakland Press.

Rogers ended up in jail with a $100,000 bond for "taking an unauthorized leave from the three-quarter home and also testing positive for narcotics."  This obviously doesn't surprise me one bit, as we all know how much Rogers enjoys his narcotics.  After all, he did smoke himself out of the NFL and went from being fast as hell to running a 4.8 in the 40-yard dash.  Great pick, Matt Millen.

Rogers owes the Lions $8.5 million for getting suspended under the NFL's substance abuse policy, which violated his contract.  Like I said, the man smoked himself out of the NFL, and he owes the Lions millions of dollars because of his actions.

On the bright side, Rogers didn't shoot himself in the leg like another former MSU receiver, but he did provide us this photo from the Oakland County 52-1 District Court: 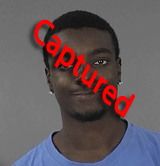 Maybe he wouldn't have been captured if he could run faster.  I know, I know, that was a distasteful joke.  I'm sorry; it was too easy.