For an updated look at the new logo and uniforms, click here.

A reader sent me a couple pictures that include what appears to be a style sheet of the Lions' new logo/uniforms and a clearer looking version of the new logo.  First, the style sheet (click to enlarge): 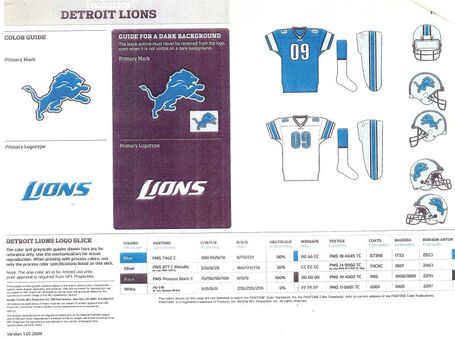 The above picture confirms what the logo looks like and also gives us a peek at the new uniforms, which are basically the same as the ones worn since 2003.  The only noticeable difference is the striping on the pants.  Right now it is a double stripe of blue with white in the middle.  The new pants appear to fill the entire stripe with blue and outline it with white and black.  On that note, it is worth pointing out that although the black jerseys are gone, the color black is still present in the Lions' logo and uniforms.  In fact, it specifically says in the above image that "[t]he black outline must never be removed from the logo, even when it is not visible on a dark background."

I also want to point out that the color silver doesn't appear to have shown up correctly in the above image.  I was thinking the helmets were going to be white at first, but then I looked at the color guide and saw that silver didn't show up down there, either.

The other image sent my way is from the forums on Sportslogos.net and is a high resolution version of the new logo compared to the old one.  A user from that forum "vectorized" the new one, and it looks like a dead-on representation of the logo on the toy tractor trailer and in the image posted above.

It will be odd seeing a meaner looking Bubbles next season, but like I said yesterday, it is an improvement in my book.  I also like the new "Lions" styling (seen in the first picture), though it will be hard to part with the previous version that has been around since 1970.