A reader who works with the Lions via a sponsorship received a letter from the team and passed it along to me.  It apparently is the Lions' 2009 "State of the Team" address, and it features Jim Schwartz.  It sounds like it was also mailed out to season ticket holders based on the last two paragraphs.

Here is a text version of the letter:

Since becoming head coach of the Lions nearly four months ago, I have been extremely encouraged by what we've been able to accomplish so far this offseason.

For starters, we were able to put together an exceptional coaching staff, led by our two highly-respected coordinators--Scott Linehan and Gunther Cunningham.

I have also been extremely pleased by how our returning veteran players have responded to the offseason program, mini-camps, OTAs and our new coaching staff.  At our first team meeting I told our players that we--both players and coaches--have to prove ourselves to each other.  So far, our returning players have embraced both the challenge and opportunity to do just that.

We also improved our roster by adding quality veteran players like Julian Peterson, Philip Buchanan (sp), Bryant Johnson, Anthony Henry and Larry Foote.  And our scouts and personnel department did a tremendous job preparing us for the 2009 draft; one I sincerely believe will provide huge dividends for years to come.

I've also been encouraged by you--our fans.  Your passion for this football team is undeniable.  I have seen it and lived it every day that I have been on the job.  This type of passion and support tells me just how important the Lions are to this community, and it also underscores the obligation we have to produce a winner for our fans.

Please don't underestimate how vital you are to the success of our football team.  You can help create the greatest home-field advantage in the NFL at Ford Field and that can be the difference between winning and losing.

So as we continue to work each day and build a football team that you can be proud of, I would personally like to thank each of you for your past support of the Lions and encourage you to be there again at Ford Field this season.  Your support in the stands will undoubtedly help us be successful on the field.

And here is an actual image of it (click to enlarge): 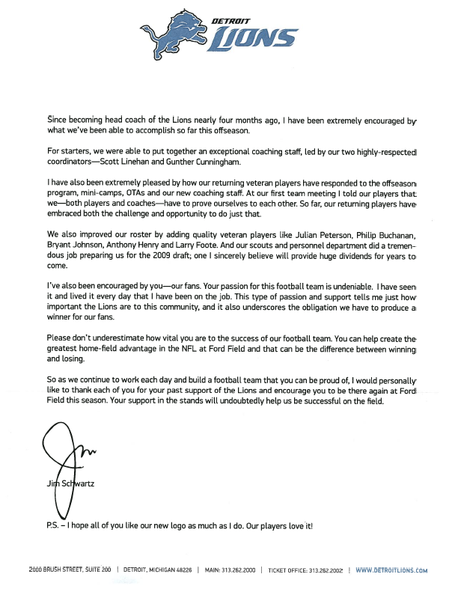 The reader who sent this to me said he's never received a letter like this before, so it's nice to see that the team is actually reaching out to the fans.  After last season, they need to do everything humanly possible to repair/maintain the relationship between the team and fans, and although winning is the ultimate solution to any problem that exists, a letter like the one above is a nice gesture in the mean time.