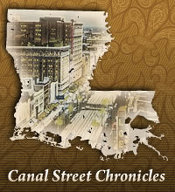 To get ready for Sunday's game I exchanged five questions with Canal Street Chronicles, SB Nation's Saints blog.  My answers to his questions can be found here, and his answers to my questions are below.

1. Pierre Thomas is questionable for Sunday's game because of a sprained right knee. Do you think he will play, and if he does, how much of an impact will he have?

Canal Street Chronicles: I really don't expect him to play. Sean Payton said [Wednesday] that he was optimistic about getting Thomas some work [Thursday] but I just don't think it will happen. Personally, I'd like to see the Saints take it easy with him and make sure he's really healthy. I don't think any good can come from pushing Pierre before he's really ready.

If Pierre is out of the lineup, I would expect to see Mike Bell get a bulk of the carries on Sunday. He's looked great in pre-season and is a more than adequate substitution. Fantasy football fanatics, consider yourselves warned.

2. Sticking with running backs, what role can Lions fans expect to see Reggie Bush in on Sunday? Now that Thomas has seemingly taken over as the starting running back (assuming he plays), is Bush more of a "get him the ball any way you can" type of player?

CSC: Oh man, I can't believe you just asked me this question. This is the singular most divisive question in Who Dat Nation and a point of great debate. Personally, I don't view Reggie as a between the tackles type of runner. Never have. The Saints may need to hand it off to him a few times just to keep the defense honest but Reggie is most dangerous when he can get in space. Quick screens, tosses and short slants seem to work best. Head coach Payton is an offensive play calling wiz; I trust him to utilize Reggie better this season than in seasons past. Bush is also nice to have for punt returns when a game is on the line.

3. One of the knocks on the Saints the last few seasons has been their defense. What is the outlook for that unit this season?

CSC: The outlook is bright, it really is. There have been numerous upgrades on the defense this off-season, the biggest of which was a change in defensive coordinators from Gary Gibbs to Gregg Williams. Much of Williams' philosophy revolves around creating turnovers and Saints fans have seen lots of that so far. And here's a fun fact: The Saints allowed the second fewest points during the pre-season. That's a huge step for a defense that was once a laughing stock. So Saints fans are pretty optimistic this year, moreso than years past. You might not believe this but I really feel they've got the potential to become a top ten defense. In reality, as long as the offense continues to dominate, the Saints should need only a mediocre defense to win games. New scheme, new philosophy and new faces should equal success for the Saints in 2009.

4. Speaking of defense, who is going to be responsible for covering Calvin Johnson on Sunday, and how do you think he will do against Megatron?

CSC: The Saints best cornerback is now probably Jabari Greer, the teams big off-season acquisition. I'd expect him to be matching up against Johnson the most this Sunday. However, with Johnson's talent as a receiver, I'd say he's got the advantage and think Greer will certainly have a tough task on his hands. You can also look for veteran safety Darren Sharper to offer some help over the top. Lions fans should be pretty familiar with Sharper.

5. In a division that is always stacked with solid teams, where do the Saints fit into the NFC South's picture for 2009?

CSC: It's a pretty tight race between the Saints, Panthers and Falcons. Depending on what you read, one of those three teams will win the division. Obviously, I think the Saints have the edge but the Falcons scare me the most. The Panthers seem to be on the decline and the wheels have fallen completely off in Tampa Bay; nobody is expecting much from them. It's obvious and cliche but those games will be most important this season.

Bonus Question: Do you have a prediction for Sunday?

I think the game will go very much like last season's contest between the two teams. I'll say 45-17. Sorry.