Each week during the 2009 season I took a look at the Lions' red zone performance, which proved to reveal some interesting trends.  Quite often it was evident that the Lions' defense had problems keeping teams out of the red zone, but once inside the 20-yard line they played quite well.  On the flip side, the Lions' offense seemed to have problems getting into the red zone at all.  There were many games where they had only a single trip inside the 20-yard line, which was a big reason why the Lions struggled to score points so often during the course of the season.

Although just from doing the weekly post about how the Lions fared inside the red zone I could sense what trends there were, I figured the best way to recap the entire season would be by plugging the stats into graphs and analyzing the evidence from there.  One thing I will note is that for this breakdown of red zone performances I only took into account when touchdowns were scored as opposed to touchdowns and field goals.  The reason for that is I figured it would give us a better sense of how the Lions performed.  Although I did place an emphasis on just getting points during the season, I think looking at only touchdowns will be a bit more interesting. 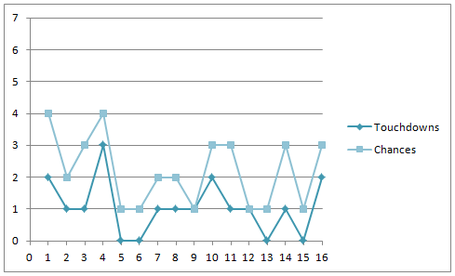 The first thing about this graph that jumps out at me is how consistently bad the Lions were at getting into the red zone.  That was one of the things I noticed throughout the season, but seeing it in graph form really exemplifies just how bad the Lions were with that stat.  Not once did the Lions have more than four red zone appearances in a game, and six times they had only one trip inside the 20.  What's more, in four of those six games where the Lions only had a single red zone appearance they came away with no touchdowns in the red zone.  That is just really bad. 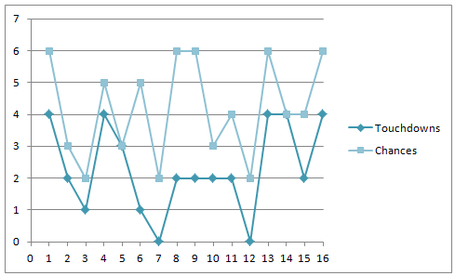 The eye-popping stat derived from this graph is how often the Lions allowed teams to get to the red zone 5-6 times a game.  In that regard the defense did a very poor job, and the stats on TeamRankings.com back that up.  Out of all 32 teams, the Lions allowed the most red zone appearances, which is no surprise based on the above graph.

The good news for the defense is that once inside the 20, things weren't quite as bad as one might expect.  The Lions ranked 16th in the league in opponent red zone touchdown percentage, which is right where I would have placed them.  Throughout the season I stressed that the Lions' defense did a good job of keeping opponents out of the end zone once inside the 20.  Towards the end of the season they seemed to struggle a bit more than usual, but from Week 6 to Week 12 the Lions' defense didn't once give up more than 2 touchdowns in the red zone in a game.  That is pretty impressive.

The coolest thing about the stats on TeamRankings.com is that you can go back and look at the numbers from 2008.  To show the differences for both the offense and defense from 2008 to 2009, here is a comparison of the stats for each season (NFL ranking is in parentheses):

So what does this all mean?  Well, the 2008 offense did a surprisingly good job inside the red zone.  They didn't get there very often, having the 2nd-fewest attempts in the league, but they had the 4th-best touchdown percentage, which was stunning to me.  In that regard, the Lions improved by getting inside the red zone more often in 2009, but the down side is that they scored touchdowns much less often, which is hard to believe.

Defensively, the Lions improved big time in the touchdown percentage department.  In 2008, the Lions had the worst percentage in the league, but with a large improvement in 2009, Detroit moved up to the middle of the pack.  They did allow opponents into the red zone more often, but touchdowns were scored less frequently.

As you can see from the numbers, the defense went in the right direction improvement-wise in 2009, whereas the offense went in the wrong direction.  Looking ahead to the 2010 season, the Lions need to work on getting into the red zone more often and scoring more touchdowns on offense, and on defense they need to do a better job of keeping the opponent out of the red zone and continue to do good work in keeping the opponent out of the end zone once inside the 20.