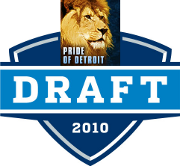 The general managers have been selected for the 2010 Pride of Detroit Community Mock Draft, which will officially get started next week.  You can find the table of GMs and who is representing which team after the jump.  Also after the jump are a list of important rules and other information about the draft (how to make your pick, for example), so make sure to read through everything carefully so we can try to get through this thing with as few speed bumps as possible.

One thing I want to note before you get to the rules and list of GMs is that this mock draft will last two full rounds and then end on the Lions' third-round selection.  With the way the schedule worked out, there is just no way to get in three full rounds, so I settled on two rounds and two picks.  The extra two picks are so we can get one more in for the Lions.  That final pick will actually be posted the day before the real draft, so in that regard the timing worked out perfectly.

Here is the order/schedule of picks.  The list below these tables is alternates in case a GM has to drop out of the mock draft or misses his deadline or whatever.