So who does everyone think Gunther was referring to with this quote:

"We were talking about a linebacker today in the draft, and I’m not going to give you his name, and I love him," Cunningham said. "Nobody else thinks he can do what I think he can do. But I saw it. And Jim saw it. And Matt was put on the carpet, if we draft him and he doesn’t play the first game, he’s fired."

I believe its someone they coached at the Senior Bowl. The North squad LBs were Sean Weatherspoon, Daryl Washington, Koa Misi, A.J. Edds, Phillip Dillard, and Donald Butler.

I think its A.J. Edds, the dude is 6'4 - 245lb. He's a 3 year starter at outside LB who doesn't make many mistakes and wraps up his tackles (we all know how important that is for the Lions.) His Senior season looked like this: 73 tackles, 4.5 tackles for loss, 4 interceptions, and 7 pass break up's. Edds played outstanding during Senior Bowl and tallied 2 tackles, an interception, and a Tim Tebow fumble recovery. My only worry now is that he will not last the extra 28 picks that we traded back in the 4th round. Cross your fingers, he could be a fixture of our D for years to come.

Also, imagine Myron Rolle next to Delmas!!!!!! We need to find a low 5th round pick. 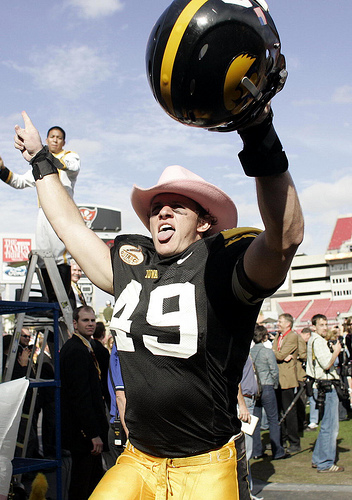