NFL commissioner Roger Goodell recently invited league employees and their families and friends to the Giants' practice facility for the "Bubble Bowl," which is an annual flag football game. Goodell himself participated in the event, and his team wore Detroit Lions shirts during the game. One of the other teams were decked out in Raiders gear, but I thought it was pretty cool that the commish was repping the Lions during the game. 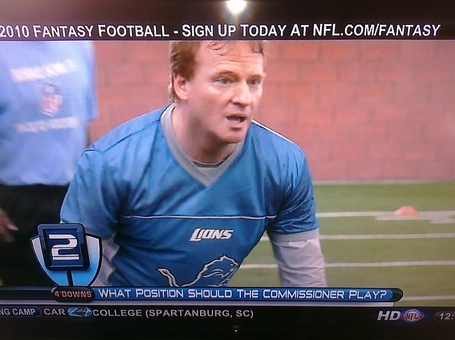 Goodell looked like he had some moves in the footage they showed, and just look at the concentration on his face in the above picture. Maybe the Lions should sign him up for training camp. They do have a lot of question marks at linebacker, and I think him and Zack Follett would make for a pretty interesting combination in the defensive backfield. Follett lays people out, and if opponents hit Goodell too hard, he could suspend them for the season. Talk about an x-factor.