Why Are Albert Haynesworth And Gerald McCoy Jerseys For Sale In Lions' Online Store?

Share All sharing options for: Why Are Albert Haynesworth And Gerald McCoy Jerseys For Sale In Lions' Online Store?

When an e-mailer tipped me off that the Detroit Lions' official online store is selling an Albert Haynesworth jersey, I was confused, to say the least. If we were later in the offseason and a CBA was actually in place, I would think a trade was brewing between the Lions and Redskins. Right now, however, there is no possible way Haynesworth is becoming a Lion, so his jersey being in the official store makes no sense.

Upon visiting the store and seeing what other jerseys are on sale, it became evident that somebody either messed with the site or there was simply a big mistake in the system. Not only is a Haynesworth jersey for sale, but you can also buy a Gerald McCoy one. That's right; the current Buccaneers defensive tackle has a jersey for sale in the Lions' official online store, and it even says "2010 Draft Pick!" right above the price listing of $80. It also says that the Lions selected McCoy in the first round of the 2010 NFL Draft in the description on the page of the jersey. 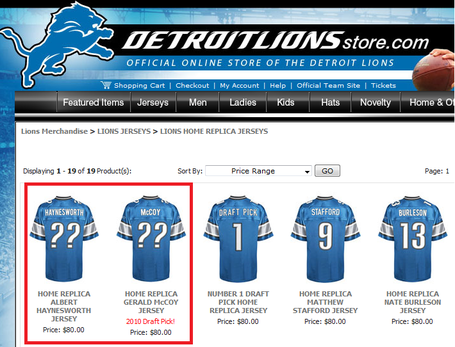 Clearly something is up, but it's with the online store rather than behind the scenes with the Lions. If trades could actually be made right now and only Haynesworth's jersey was in the store, I would say let the speculation begin about a potential move being made. Considering trades can't happen involving players and McCoy's jersey is also in there, I will chalk this one up to somebody having fun at the Lions' expense or the online store malfunctioning.

UPDATE: The jerseys have been removed from the store.