Breaking Down The Atlanta Falcons Defense

Share All sharing options for: Breaking Down The Atlanta Falcons Defense

The Atlanta Falcons defense is giving up close to 25 points a game this season after giving up only 18 a game last season, ranking fifth in the league. The interesting part of it all is that this is more or less the same unit that took the field last season, aside from the free agent addition of Ray Edwards. You would have thought that the addition of Edwards would greatly help a team that has struggled in the last couple of years to generate pass rush, yet the Falcons have only registered 10 sacks this season. That very well may be their downfall again tomorrow.

Their defense is coached in unison by head coach Mike Smith and defensive coordinator Brian Van Gorder. Mike Smith has a pretty deep NFL background as the Jacksonville Jaguars defensive coordinator from 2003 to 2007, Baltimore Ravens linebackers coach in 2002 and defensive line coach from 1999 to 2001. Before joining the NFL ranks, Smith spent almost a decade in college, most notably at Tennessee Tech from 1987 to 1998, serving various roles. He also spent time at San Diego State and Morehead State.

Van Gorder, on the other hand, is very much a local product. He played linebacker at Wayne State and began his coaching career at West Bloomfield High before he moved on to coaching high schools in Florida. He returned to the state of Michigan in 1989, when he was hired as the defensive coordinator for the Grand Valley State Lakers; the Lakers posted a perfect 11-0 season that year. After a couple of years at GVSU, he returned to his alma mater, Wayne State, as their head coach, where he would lead them to their first winning record in nearly a decade. He also coached at Central Florida, Central Michigan, Western Illinois, Georgia and Georgia Southern. His only NFL experience aside from the Falcons was with the Jaguars as their linebackers coach.

Given the backgrounds of both men, I think you all can already figure out what kind of scheme they run in Atlanta. You would think that a man who spent 1999 to 2002 with the Ravens would run a 3-4 defense built around great defensive linemen and pass rushers, but the Falcons aren’t that by a large margin. The Falcons are a 4-3 team that plays sound football and doesn’t take any risks on most downs, but there are a few things that will remind you of the Ravens. Much like the Ravens, the Falcons do bring some interesting blitzes from every angle possible, but it’s not as frequent as the Ravens or other 3-4 teams.

Instead, the Falcons rely on their four-man rush for the most part much like the Lions, except for the fact that they aren’t nearly as good at getting pressure as the Lions. That often leaves quarterbacks time to pick apart the Falcons secondary that, while good, is not great. The chart below shows the stats of the six quarterbacks the Falcons have faced so far this season. While they have shut down a few of them, you can see that most of the QBs they have faced thus far have carved them up pretty bad.

On the chart, Cam Newton and Josh Freeman’s numbers are making the average look pretty decent, but notice how they gave up 300 yards to Jay Cutler and Tarvaris Jackson. If they play like they did against those two quarterbacks, it is going to be a long day in Detroit for the Falcons. Add the fact that their best pass rusher, John Abraham, is injured and questionable for Sunday’s game, it does not look good for the Atlanta Falcons.

For this week’s defensive play breakdown, I am going to show you guys a play from the Falcons' Week 1 matchup against the Bears (watch the play here at the 0:09 mark). In the diagram below, the Bears are in a pretty conservative formation with receivers bunched on the left side of the field and two tight ends in the formation. They motion one receiver over from the right side, which overloads the left, but the Falcons leave the corner on that side and try to use the safety to cover the extra receiver on the other side. The Falcons also try to mix things up by showing blitz across the board with both linebackers at the line of scrimmage. 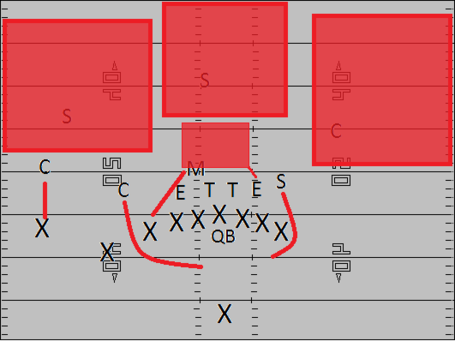 When the play begins, the Falcons blitz the strong side linebacker and drop a defensive end in coverage. At the same time, they use the middle linebacker on the other side of the play to cover one of the receivers and blitz the nickel back on the play. The play results in a first down catch by Roy Williams (puke), even though they brought a corner blitz and zone blitz at the same time. That play basically represents the Falcons' season thus far: close but no cigar.

Overall, I don’t like the Falcons defense in this game. It is a tough, hard-nosed defense that is only giving up 97.5 yards a game on the ground, which is good for ninth in the league, but that doesn’t mean much against the Lions because they won’t run the ball that much to begin with. On the other hand, the Falcons are one of the worst pass defenses in the league, ranking 27th in the league while giving up close to 283 yards through the air. I like the Lions' chances to score a lot of points in this game, especially after last week’s dismal performance, and expect them to score 30-plus points in this game.