Share All sharing options for: On Paper: Detroit Lions At Denver Broncos

The Lions come off their second consecutive loss looking to turn things around against Tim Tebow and the Broncos before they head to the bye week. By records alone (5-2 vs. 2-4), this looks like the perfect game for the Lions to head to the bye week on a positive note. But the Broncos are riding high after a dramatic win with Tebow behind center. The Lions are only a three-point favorite according to Vegas, but the charts say something different (or do they?). Check it out.

As we've all seen and suspected, Matthew Stafford has not been good as of late. The top half of this chart looks a whole lot better than the bottom half. Still, Stafford and the pass offense remains in the top half of the league in any relevant passing stat. They rank seventh in passer rating, 14th in yards per attempt, third in passing touchdowns and tied for fourth in interceptions. Stafford looks to be healthy enough to play this week, so he'll have a chance to turn his fortunes around.

Innnnteresting. Every single opponent has surpassed their passer rating average against the Broncos this year. Half of their opponents have racked up yardage over their season average. Looking at other stats, we see that this is obviously a below average pass defense. The Broncos rank 31st in passer rating allowed, 31st in completion percentage allowed, and only have three interceptions on the year (T-28th). However, they do have 16 sacks on the year (T-14th) and have a formidable defensive line. Still, this is clearly a matchup the Lions should (and need to exploit). Lions +3.
Lions Run Offense (27th) vs. Broncos Run Defense (18th) 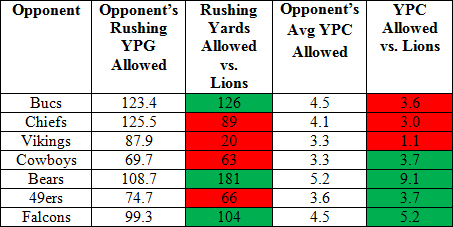 Despite my own opinions, the Lions running attack looks to be somewhat average, given this chart. In the past four games, the Lions have surpassed yards per carry averages and have surpassed yardage average in two of those games. The Lions will likely be without Jahvid Best again this week, which will hurt the Lions' chances to break a big run, but Keiland Williams and Maurice Morris proved they aren't bad options last week. There has been a lot of debate this week over whether the running game has been effective enough for the Lions to win, but the answer is still unclear.

Speaking of average, the Broncos seem to be inconsistent in stopping the run. Against quality running teams like the Raiders and Chargers, they gave up nearly 200 yards apiece, but they have also held four of six teams under their yards per carry average. Overall, the Broncos are giving up only 3.9 a carry, good for eighth in the league. However, they have given up six rushes of 20+ yards, which is tied for ninth most.

The Broncos don't pose a huge threat in this matchup, but the Lions don't counter with much of a running game, either. Hard to imagine this matchup swinging the outcome of this game either way. I expect the Lions to have another confusing week of: did they have a good running game or not? Draw.

Before I jump into this, it's worth noting Lord Tebow played in only the last two games, and the offense looks entirely different without Kyle Orton behind center. In other words, take the first four games with a grain of salt.

I went back and watched every offensive snap the Broncos took against the Dolphins and this is what I noticed. Obviously, Tebow struggles with accuracy. But what was very interesting was how long Tebow hung on to the ball. This is both good and bad news for the Lions. The good news is that they're likely to rack up sacks. Tebow took seven sacks last week against the Dolphins, who only had seven sacks on the season prior to that game. The bad news is that Tebow is also incredibly elusive. Miami could have easily had double-digit sacks last week, but Tebow extended a handful of plays with his legs. This instantly brings back memories of the game against the Bears, when the Lions could have (and should have) taken down Jay Cutler more than they did. However, while Cutler made the Lions pay, Tebow is unlikely to.

The Lions pass defense continues to look better and better. They actually rank fourth in passer rating allowed, tied for second in yards per attempt allowed and their 10 interceptions rank fifth overall. Many are getting caught up in the Lions' decrease in sacks (their 17 sacks still rank tied for eighth), but the Lions are not sending many blitzes and those extra men in coverage clearly are doing their jobs effectively.

Tebow's ability to extend the play is a bit worrisome, but nearly everything else in the matchup favors the Lions. I noticed that because of Tebow's tendency to hold on to the ball longer, he is susceptible to delayed blitzes. The Lions should have their hands all over Tebow on Sunday, and anything more than 200 yards passing and a 70.0 passer rating would be surprising and disappointing. Lions +2.

Again, I would focus on the last two weeks, as a Tebow-led offense is more relevant to our interests. The Broncos will start Knowshon Moreno as Willis McGahee broke his finger last week. Moreno is a capable back, and averaged 4.0 yards a carry in relief last week. But the real threat this week will be Tebow and his scrambling. Tebow has gained 97 yards in one and a half games (6.5 a carry). Because of his accuracy issues, I expect the Lions to see a full dose of the Broncos running attack.

Once again, the Lions run defense looked competent for most of the day against the Falcons but then gave up two crushingly long runs. In fact the Lions have given up eight rushes of 20+ yards (tied for fourth most) and four rushes of 40+ yards (most in the league).

I really hope the Lions commit themselves to stopping the run this week and dare Tebow to beat them with his arm. As mentioned before, I expect the Broncos to emphasize the running game all day. And if the Lions can't stop it, they could be in some trouble. I think the Broncos have the advantage, but the Lions have the personnel to stop them, if they focus on run-stopping. Broncos +1.5

The Lions come out with a commanding +3.5 advantage. There are only a few things that worry me in this matchup: playing at Mile High Stadium, Stafford's inconsistencies and the Lions special teams coverage. The Broncos are eighth in kick return average and first in punt return average. If the Lions can stop the Broncos on these few plays, they should have no problem ending their losing streak. Lions 27, Broncos 10.