Breaking Down The Chicago Bears Offense

Share All sharing options for: Breaking Down The Chicago Bears Offense

Before I talk about the Bears offense today, I would like to say that my thoughts and prayers go out to the victims of the Penn State child sex scandal. It’s a disgusting and tragic thing that has happened, and I hope the media and the idiots rioting at Penn State realize this story is about more than just Joe Paterno.

When the Lions and Bears met the first time in Week 5 of the season, Chicago was the somewhat struggling team, sitting at 2-2, and Detroit was the red-hot undefeated team playing at home. Since then, the roles have essentially reversed. Since losing to the Lions in Week 5, the Bears have rolled off three straight wins and now sit just one game back of the Lions for second place in the division. So it goes it without saying, this game is critical for both teams for the playoff race. A win for the Lions mean they would be sitting at 7-3 and the Bears would actually be three games back of them since Detroit would own the season sweep over them. A win for the Bears means that they would be tied with the Lions for second place in the division with just seven games to go in the season.

I was going to take this post to describe the Mike Martz offense, but seeing as how Bears have been anything but a high-octane passing offense, I think it's a better idea to talk about the Bears rushing offense. Since mustering only 13 points against Lions a month ago, the Bears offense has been on fire. They managed to score 39 against the Vikings, 24 against the Buccaneers and 30 against the Eagles. Not to anyone’s surprise, the Bears offense has started to click the last few weeks because they have gotten Matt Forte involved on a level that they hadn’t before. In the last three games, Forte touched the ball 23 times once and 27 times twice. Compare that to the fact that Jay Cutler, the quarterback of the team, threw the ball 31 times once and 32 times twice. In a pass-happy league, that stat is simply amazing.

Running the ball so much has helped their passing game. Through the first five weeks of the season, Jay Cutler was struggling quite a bit, having a quarterback rating of 80.1 while being sacked 18 times in the same time span. Over the last three games, however, Cutler and the passing game has become far more efficient with Cutler having a passer rating of 91 while being sacked only three times, including a zero-sack game against the Eagles on Monday. Over the last three games, Cutler has also had a touchdown to interception ratio of 5-2; he had a TD-INT ratio of 6-4 in the first five games.

I guess all of the above stats and information should’ve brought a key question in your mind: What changed between the last time the Lions went up against the Bears and this time? How come the Bears are so much better on offense now than before? I think the biggest key to this whole thing has been the offensive line. The biggest key on the Bears line has been the fact that the shuffling with personnel has stopped. The Bears started the season with Gabe Carimi on the right side of the line, but Frank Omiyale replaced him after Carimi was injured. However, Omiyale had been one of the weakest points of the offensive line and was benched in favor of their seventh-round pick in 2009, Lance Louis.

For this week’s play breakdown, I am going to show you why the Bears and Matt Forte are so successful at running the ball. The following play comes from the Eagles game the Bears played on Monday Night Football. The play is actually very relevant to the Lions because the Eagles are one of the few teams, along with the Lions, that play the wide-nine style of defense, where the defensive ends line up wider than usual. In the case below, however, the Eagles actually stack the box with eight defenders to account for the seven linemen the Bears bring on the offensive line. Notice how it’s second-and-four at the Bears 27-yard line, yet Chicago is in a power running formation. This is obviously a clear departure from what we have come to expect from Mike Martz and his offenses.

(H/T to simscity for the idea to use screenshots to describe the play.) 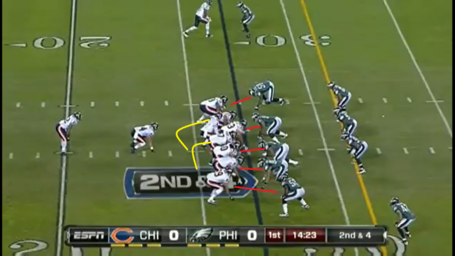 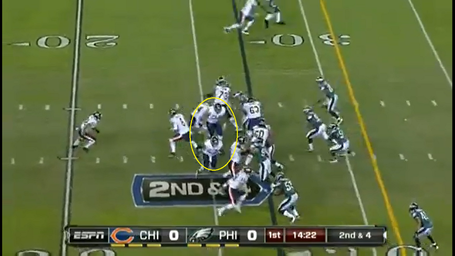 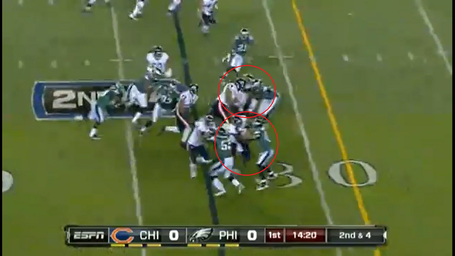 As the play ensues, the Bears do something really creative. Utilizing the seven men up front, they actually leave their tight ends and tackles to fend for themselves, using them to clock all five men the Eagles have on the line. Then, the Bears pull both of their guards to the right and use them to get critical blocks. As you can see in the third screenshot, Chris Spencer (#67), the right guard, gets a key block on Eagles strong safety Kurt Coleman, while left guard Chris Williams gets a key block on middle linebacker Jamar Chaney. In reality, there wasn’t really much the Eagles could do as far as scheme is concerned, but the Eagles defenders should have definitely gotten off some of those blocks. Either way, this was a great play design by Mike Martz and solid execution by the Bears offense line.

That brings me to the key of the game on Sunday, which simply is gap containment. Matt Forte isn’t an elite athlete, but that doesn’t mean he can’t do elite damage to the Lions defense, and he has done his damage on the Lions in the past. However, a running back, no matter how good he is, cannot do damage on the ground unless the line upfront does a good job of blocking. If the Lions defensive line isn’t over-aggressive like they were the first time these two teams faced off, and the linebackers do a good job of filling up the gaps they are supposed to, then the Lions should be able to contain Matt Forte and the Bears ground game.

All in all, I think the Bears offense is one the Lions need to respect. The Bears definitely have the pieces to not only score points on the Lions, but also to keep the Lions offense on the sideline. If the Bears can get the ground game going, I don’t like the Lions' chances in this game. However, the Lions have had two weeks to prepare for Forte and the Bears, while the Bears will only have five days to prepare for the Lions defense. That should shift the advantage to the Lions, and they should still win this game.