The Inception Of The Tampa-2 Defense

Share All sharing options for: The Inception Of The Tampa-2 Defense

Since I already wrote a post breaking down the Bears defense earlier in the season and there aren’t any significant changes in what they are doing, I think it's a good idea to use this post to specifically discuss the Tampa-2 defense, which the Bears run.

During the 1970s, the Pittsburgh Steelers were one of the most dominant teams in the NFL, winning four Super Bowls in a seven-year span. Leading those teams were some of the meanest, toughest and stingiest defenses the NFL had ever seen and will ever see. Up front, they had four All-Pro and two All-Decade defensive linemen in "Mean" Joe Greene, L.C. Greenwood, Ernie Holmes, and Dwight White, a group better know today by the nickname "The Steel Curtain." Having that type of talent up front often gave the Steelers the ability to do as they please with their back seven, meaning they could simply drop all seven players back in coverage and be assured that the front four would still cause havoc for the opposition.

This ability to drop seven men into coverage and do as they please led to some creativity on the part of then head coach Chuck Noll and defensive coordinator Bud Carson. You see, the Steelers not only had a legendary front four, but they also had one of the greatest middle linebackers in the history of the game in Jack Lambert. Lambert would go on to become a nine-time Pro Bowler, a seven-time All-Pro, a four-time Super Bowl champion, and the Defensive Player of the Year in 1976. He was the ideal middle linebacker: big, tall, fast and a vicious hitter that could also cover. He would end his career as a member of the 20/20 Club, intercepting 28 passes and acquiring 28.5 sacks in an 11-year Hall of Fame career.

Having a special player like Lambert, who could both cover like a safety and tackle like a linebacker, was really the biggest reason for the inception of the "Tampa-2" defense by Tony Dungy in the mid-90s. Had there been no Jack Lambert, the chances are pretty high that there is no Tampa-2 defense today. What the Steelers used to do was use Lambert like a safety on certain plays, where they would drop him back into deeper zones, creating almost a cover three type look. Of course, this innovation wasn’t of too much use in the 70s; most teams in the league were your old school, ground and pound type teams.

However, flash forward two decades and NFL offenses are in a completely different state. When Tony Dungy took over the Tampa Bay Buccaneers in 1996, it was clearly the offensive teams that ruled the league. These days, the league is a passing one, overrun by teams with high-octane aerial attacks.  Down south, you had Troy Aikman and Norv Turner burning teams with their form of the Air Coryell. Up north and out west, you had Brett Favre and Mike Holmgren in Green Bay and Mike Shanahan and John Elway in Denver carrying on Bill Walsh’s West Coast Offense with deadly precision. That year, Keyshawn Johnson became the first wide receiver to be selected with the first overall pick in 12 years. Thus, Tony Dungy was left to find a way to contain these pass happy offenses and do it quickly, too.

On his Tampa Bay roster, Dungy had two Pro Bowl rookies from the 1995 draft that would shape the Buccaneers for the next decade: Warren Sapp and Derrick Brooks. He also had a veteran middle linebacker in Hardy Nickerson, who would go on to become an All-Pro by the end of ’96 season. I think at this point Tony Dungy realized that he could potentially replicate the Steel Curtain defense of the Steelers since he had the key pieces in Sapp, Brooks and Nickerson. To finish off his version of the Steel Curtain, Dungy went into the draft and selected two defensive ends in the first round in Regan Upshaw and Marcus Jones. Unfortunately for Dungy, both players ended up being busts, and the Buccaneers weren’t an elite defensive team until they paired Sapp with Simeon Rice in 2001 (after Dungy was fired), but the blueprint for the Tampa-2 was set. 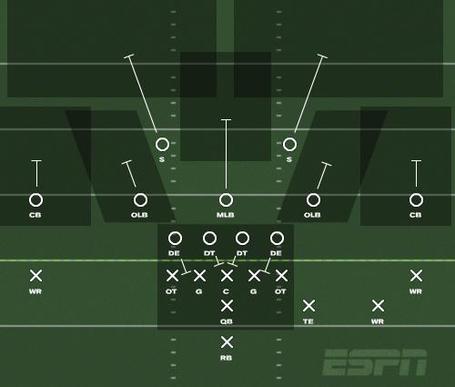 First and foremost, dropping a linebacker into a deeper zone gives the defense three men deep, which means that the offense, namely the quarterback, is far less likely to try to take a deep shot, as there are more men covering the deeper zones. It also discourages offensive coordinators from calling plays with too many vertical routes (something that is a staple of a high-octane offense like the Air Coryell) since those routes are far more likely to be covered properly or double covered.  Secondly, the deeper drop by the middle linebacker also helps to keep everything (i.e. backs and receivers) in front of the defense and allows the defense to flow to the football and gang tackle. This would mean that mid-range passing attacks like the West Coast offense wouldn’t be able to turn the shorter routes into big plays by simply running away from one or two defenders; they would have to beat multiple defenders to do real damage.

Overall, the Tampa-2 is definitely a great style of defense to play in the NFL of today, but it does place a heavy premium on talent in order to be successful, something that the Lions and Bills found out the hard way.