Share All sharing options for: On Paper: Detroit Lions At Chicago Bears

Welcome all. I hope you all enjoyed your bye week. I can honestly say that I did not. After years of having a sense of relief every bye week, it was a terribly disappointing Sunday watching football without the Lions on the slate.

This week, the Lions come into their biggest game of the season well-rested, yet still unhealthy. They will likely be without Jahvid Best, Jason Hanson hurt himself over the break (though he'll probably play anyway) and literally while I typed this sentence, the Lions signed a new punter (and disappointingly put Jason Fox on IR). All this comes at a terrible time, as this game against the Chicago Bears is absolutely essential to the playoff race. Besides this being an ever-important division game, the Lions have an opportunity to take a commanding lead in the wild card race. With a win, the Lions will essentially have a three-game lead over every NFC team besides the Falcons in the wild card race (two game lead over Bears, but with the tiebreaker, it is equivalent to three games). Despite their earlier victory over the Bears on Monday night, the Lions are actually two to three point underdogs in this game. Let's see if the charts agree.

(Note: This week, I've added the color yellow, which means the team performed within 5% of the teams' average in that statistical category)

Despite Matthew Stafford's perceived "struggles", the pass offense continues to keep this chart fairly clean. Last time the two teams played, the Lions only put up 219 passing yards, but in terms of passer rating, Stafford had one of his best games of the season. Since that game, the Lions also picked up former Bears safety Chris Harris, who may give extra insight into the Bears' secondary.

*Vikings game was a mixture of Donovan McNabb and Christian Ponder

The Bears pass defense continues to look pretty average. Although, in the past two weeks, they've held two decent quarterbacks to absolutely terrible passer ratings. They rank 15th in passer rating allowed (83.5), 13th in yards per attempt (6.8), and 26th in completion percentage (63.9). What this matchup may come down to is protecting the quarterback. The Bears only have 16 sacks on the season (22nd), but they still have Julius Peppers, and we all remember what happened to Stafford last time he was in Chicago. Also, it appears Stafford will be wearing a glove for the first time in his career. It will be interesting to see if this has a noticeable effect on his passes. Overall, this appears to be a very average pass defense, so we can assume the Lions will perform somewhat near their averages, which, as you can see by this chart, is around 260 passing yards with a 99.1 passer rating. That's a win for the Lions +2. 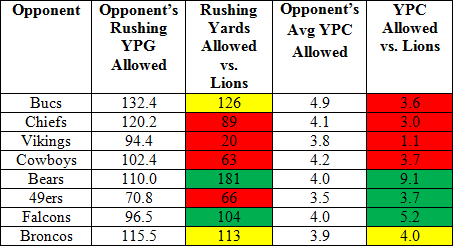 Despite the feelings that the Lions are struggling in the running game, they have actually been pretty solid since the Bears game. In the past four weeks, they've outperformed averages in five of eight categories, met averages in two and failed to reach averages in just one category (just barely outside of the 5%). Their biggest success of the season actually came against the Bears, but the Lions will be without Best this time around. As you can see, the Lions haven't exactly struggled without him. Still, much of the Lions yardage against the Bears came from a couple of explosive plays that the Lions are somewhat incapable of without Best. 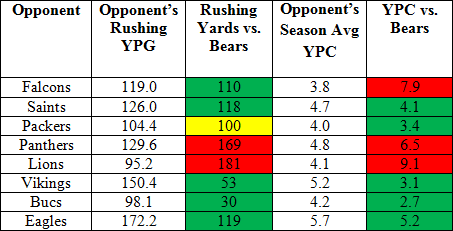 The Bears, too, have consistently played better since the Monday night game, holding their three opponents under averages in both yardage and yards per carry. Though the Bears rank 11th in rush yards allowed, they are tied for 28th in terms of yards per carry allowed (5.2), which is the same ranking as ... you guessed it, the Detroit Lions. Interestingly, the Bears only have 169 rushing attempts against them, which is the second least in the NFL, suggesting that this is the reasoning behind their high ranking in yards allowed. Still, the chart tells us that they are above average and playing well recently. Since the Lions are also trending in a positive direction, I have to give this matchup a draw.

Wow. This chart is shockingly green. Jay Cutler is quietly having a great season. He has surpassed or met passing yard averages in every game but one (he only attempted 17 passes in the Carolina game). His passer rating stats are much more pedestrian, but he still outperformed averages in half of his games this season. The Bears are 13th in passer rating (85.6), 16th in yards per attempt (7.2) and 20th in completion percentage (58.7). The key to this matchup will be the Lions' ability to not only pressure Cutler, but bring him down when given the opportunity. The Bears have allowed the 11th most sacks (22), but only three in the past three games. Much of this has to do with Cutler's elusiveness and impressive abilities outside of the pocket. Last time the Lions faced the Bears, they had no trouble getting to Cutler but didn't bring him down too often. As a result, the Bears handily outperformed the Lions' defensive averages.

The Lions haven't faced many elite passing offenses this year, but they've done a solid job making sure they aren't beaten through the air anyway. Again, they have performed well in the past three weeks (despite a 1-2 record). None of the past three teams were able to out-gain their averages in yardage or passer rating. Outside of the chart, stats show the Lions defense is borderline elite. They rank fourth in passer rating allowed (72.3), 21st in completion percentage (61.8), T-fourth in sacks (24) and FIRST in yards per attempt (5.8). Again, it's important to note that the best passing offense the Lions have faced is the Cowboys, but those stats are still impressive. Though the Bears won this matchup last time the two teams faced, I expect the Lions to rebound this week. I'd be shocked if the Bears managed to keep Cutler clean again this week, and I'd be just as shocked to see the Lions defensive linemen miss their opportunities to take Cutler down again. Lions +0.5. 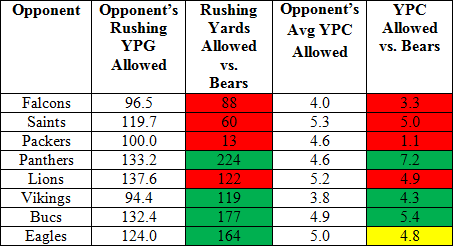 After a slow start, the Bears have started to turn it on in the past three weeks. Matt Forte, in the midst of contract talks, has started to even garner some MVP talk. Forte is second in the league in rushing yards and the Bears are tied for first in rushes of over 20 yards (10). Last matchup, Forte and the Bears barely failed to meet season averages against the Lions, but they only managed 13 points in that game. 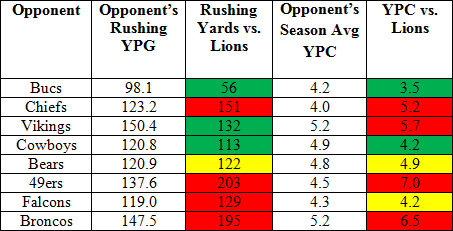 Yeesh. I keep expecting this chart to improve, but the Lions still haven't held an opponent below their rushing averages in either category since Week 4. The official Detroit Lions website tried to do some damage control this week by arguing that most of those yards are coming on big plays, and on the majority of carries, this is a great run defense. While it is true that much of the yards given up are due to big plays, that doesn't mean that those plays didn't happen or aren't prone to happening again. The Lions have given up the ninth most rushes of 20 yards (nine) and the most rushes of 40 yards or more (four). Even though the Lions won this advantage (barely) last game, there's no statistical reason for that to happen again. Bears +2.

The Lions squeak out with a +0.5 advantage. There were a couple very interesting things about the breakdown this week. First, in the previous game, the Lions won two matchups that they weren't expected to (run offense and run defense). Similarly, they lost their pass defense matchup and split their pass offense matchup, two categories I am expecting them to win this week. Also, for fun, I decided to add up all of the cells to see which team had the most green. This was the breakdown:

Pretty surprising. However, this does not mean I am being nonobjective. The point in this preview is to see how the teams' units match up against each other, not who has the best performances in the past. So while the Bears may have more green, their advantages and disadvantages match up well for the Lions ... but not by much. This is going to be a closely fought match and, likely, a low-scoring game. The stakes haven't been this high for the Lions in a decade, and I'm sure they know that. Lions 20, Bears 17.