Breaking Down The Carolina Panthers Offense

Share All sharing options for: Breaking Down The Carolina Panthers Offense

After suffering the worst loss of the season last Sunday, the Detroit Lions will be looking to get back on track this Sunday against the Carolina Panthers at home. The Panthers, even though they are sitting at 2-7, are one of the biggest surprises in the NFL season thus far. In one offseason, the Panthers offense has gone from ranking dead last in offensive yardage to ranking sixth in the league currently. In today’s post, I will break down and explain to you exactly how and why the Panthers have been able to accomplish what they have so far.

Most fans and even analysts around the NFL credit the Panthers offensive resurgence to the sensational year Cam Newton is having, and for good reason. Newton right now is seventh in the league in passing yardage, ahead of our own Matthew Stafford, who is eighth in the league. Newton also has 18 total touchdowns, 11 through the air and another seven on the ground, which puts him on pace to have a 32-touchdown rookie season. Furthermore, Newton is also on pace to pass for over 4600 yards as a rookie. I think it goes without saying that the numbers he is on pace to put up as a rookie are simply amazing.

Contrary to popular belief, he actually hasn’t been all that turnover-prone. On the season, Newton does have 10 picks, but that is actually the same number of interceptions or less than what elite quarterbacks like Philip Rivers, Drew Brees, and Tom Brady have thrown so far in the season. On top of that, Newton's 84.0 passer rating is actually 14th in the league, and the passer rating doesn’t take rushing touchdowns into account. If you were to include rushing touchdowns into the formula, his passer rating would rise to 91.1, which would be higher than Matthew Stafford’s 89.9.

Now, Cam Newton actually isn’t the only reason the Carolina Panthers are as explosive on offense as they are. One of the least talked about reasons is their offensive coordinator, Rob Chudzinski. Chudzinski had spent the last four years with the San Diego Chargers as their tight ends coach. There, he had a chance to learn under Norv Turner the intricacies of the "vertical offense" now most commonly known as the Air Coryell offense. Aside from that, Chudzinski also blends in plenty of read-option plays into the offense, which Newton had previously done at Auburn.

What the Panthers' form of vertical offense in many fashions represents is Mike Martz’s offense ... not the run heavy one he’s running now, but the one he used to run with the Lions and Rams. This means that there are tons of deep, vertical routes in their playbook; it also means that this is an offense that will gamble and be pass-happy at times. In some ways, the offensive change has worked out great for the Panthers. Last year, they only had 44 plays of 20 yards or more the entire season. This year, Cam Newton by himself has 40 plays of 20+ yards in just nine games.

For this week’s play breakdown, I am going to take a look at the read-option plays that the Panthers run with Newton. It is really where this offense is unique compared to the rest of the league and probably the biggest threat to the Lions defense on Sunday. On the play, Cam Newton has two options: give the ball to DeAngelo Williams or keep it himself. The way an option play works is by the offensive line "optioning" a defender. That means the offensive line focuses on blocking certain defenders while actually giving one of the defensive linemen a free release. What this often means is that the offensive line is at a  numbers advantage to the defensive line since you basically have five or six O-linemen blocking three or four D-linemen and linebackers. 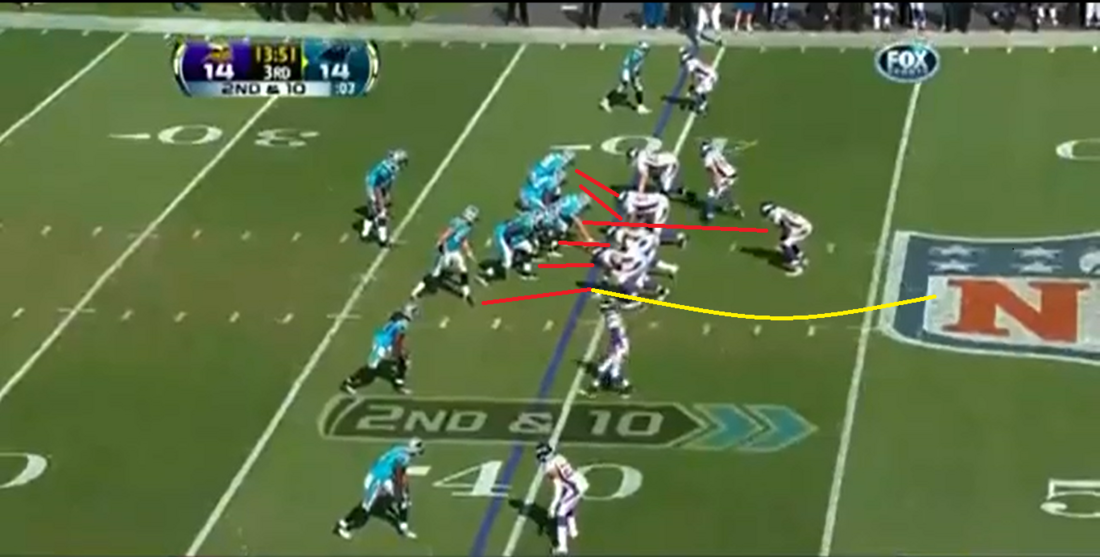 The defensive lineman that is left open has to take away the option, meaning he needs to diagnose the play and decide who is getting the ball: the running back or the quarterback. On the play, the option defender is Jared Allen. On the second shot below, you can see that he misdiagnosed the play and took the inside route, which left the edge open to Newton to utilize. On Sunday, I would expect the Panthers to take advantage of the Lions aggressiveness on the defensive line and run plenty of plays like this. 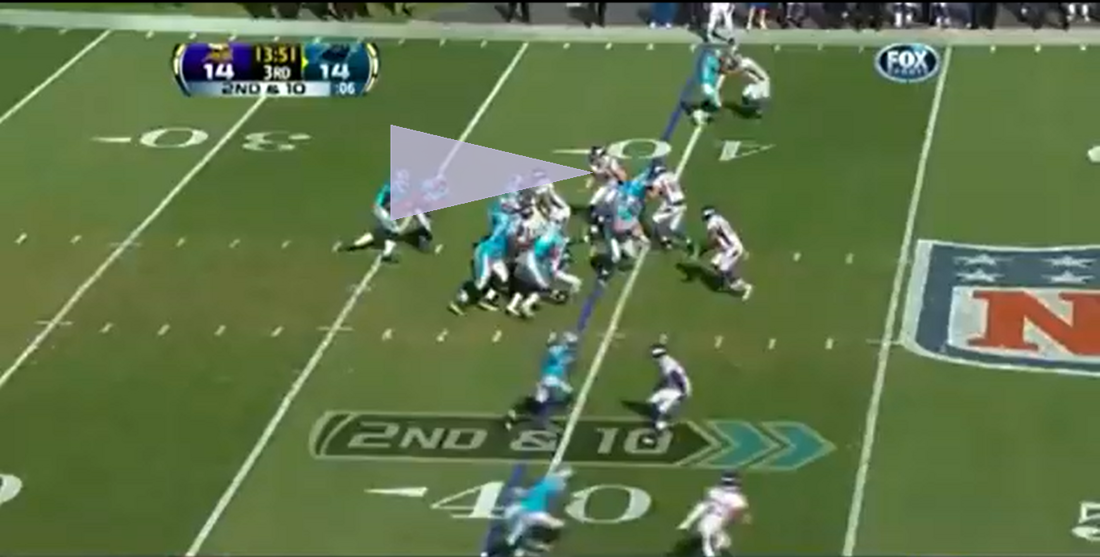 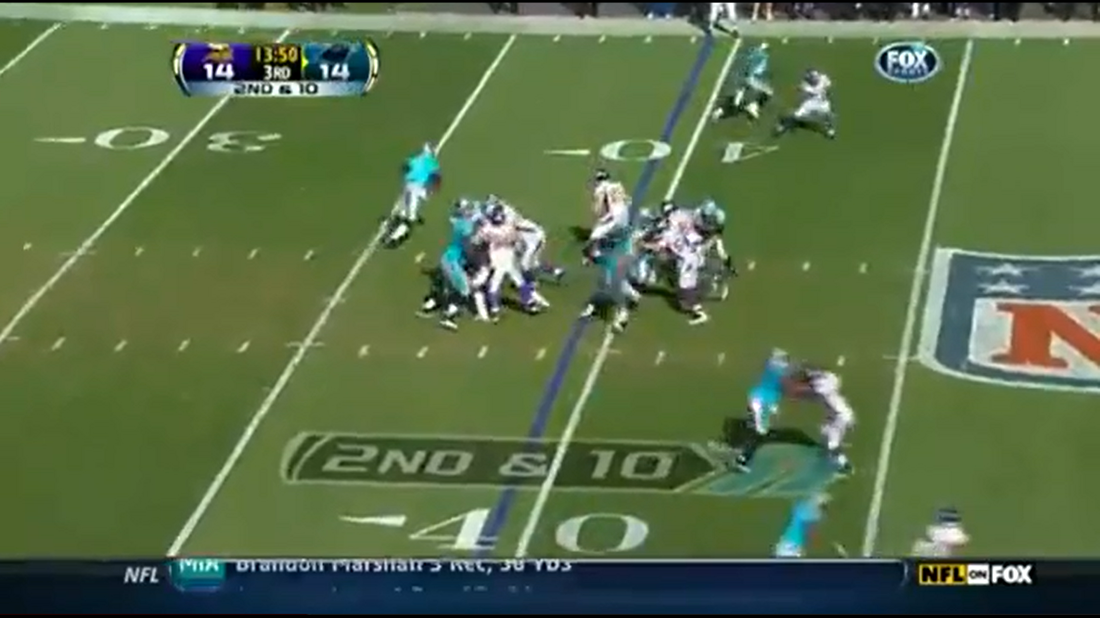 Overall, the Panthers offense can pose quite a bit of a threat to the Lions. They have a more than ample amount of weapons between Newton, DeAngelo Williams, Jonathan Stewart, Greg Olsen and a very solid offensive line to make it a game. Even though they are sitting at 2-7, I think this game is going to be very, very tough for the Lions defense, and certainly much tougher than a lot of people think.