Breaking Down The Carolina Panthers Defense

Share All sharing options for: Breaking Down The Carolina Panthers Defense

Last week, the Lions offense was stifled by a red hot Bears defense that also had some help from Mother Nature. Good thing for the Lions is that Mother Nature won’t have a say on Sunday and the Carolina Panthers defense is anything but hot at the moment. The Panthers come into the game statistically as one of the worst defenses in the NFL, ranking 30th. In today's post, I will break down the Carolina Panthers defense for you and explain exactly why they are struggling so much.

In the offseason, the Panthers went out and hired then Chargers defensive coordinator, Ron Rivera to both turn around a team that just won two games the year before and fix a defense that had given up 25.5 points per contest and only registered 33.0 sacks. The hiring made sense. Rivera was fresh off of leading a Chargers defense that ranked 10th in the league and was second in the league in sacks. Aside from that, he also had quite a bit experience working in the 4-3, as he was previously the Chicago Bears defensive coordinator from 2004 to 2006, a period in which the Bears defenses ranked 13th, first and third in the league.

Unfortunately for the Panthers, Ron Rivera hasn’t helped their defense much at all. In fact, he has actually made them slightly worse from a statistical standpoint since the Panthers are giving up more points now (26.3 points per game) as compared to last year. In addition, the Panthers are still struggling to get to the quarterback, as they have only registered 17 sacks on the season. Much like the Lions, a lot of the Panthers defensive failures are because of the fact that the Panthers have trouble stopping the run. The Carolina defense gives up close to 4.7 yards a carry and is giving up close to 138 yards on the ground. The Panthers are one of only seven teams in the league to give up more than 10 rushing touchdowns.

From a scheme standpoint, Rivera looks like he is running mostly a Tampa 2 defense with a few extra formations thrown in there. What that means for the Lions is that Matthew Stafford should have plenty of time to make his reads since a Tampa 2 generally only brings a four-man rush and the Panthers front four is definitely a work in progress at this point. While Charles Johnson is a having another great season for the Panthers with seven sacks, the rest of the front four is quite weak. In fact, the Panthers are starting two rookie defensive tackles, which is probably why they are giving up as many yards on the ground as they are.

Aside from their front four, the linebacking corps for the Panthers has been decimated with injuries. Going into the season, the Panthers had a solid group of linebackers with two-time All-Pro Jon Beason in the middle, former first-round pick Thomas Davis on the weakside and James Anderson on the strongside. However, both Davis and Beason are on the injured reserve right now, and the Panthers have been left starting Dan Connor and Omar Gaither. For a lot of teams in the league, injuries to linebackers wouldn’t be a huge deal, but it’s a massive setback for a Tampa 2 team. Just think about how bad the Bears defense would look without a guy like Lance Briggs or Brian Urlacher.

For this week’s play breakdown, I’m going to give you guys a quick example of how an offense attacks that much discussed hole in the middle of a Tampa 2 defense. If you have read my previous posts, you know by now that a Tampa 2 defense drops the middle linebacker into a deep zone in most passing situations. This helps take away deeper routes for a team and helps keep the developing play in front of the defense. In the diagram below, you can see that there is a sizable gap between the coverage zones of the safeties and the middle linebacker and the defensive line. 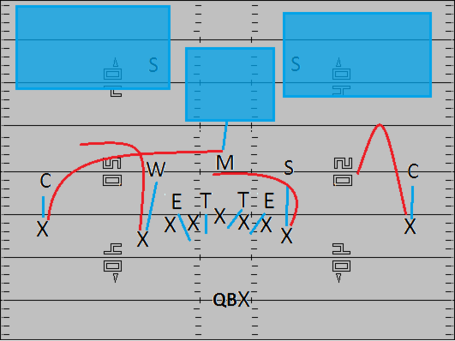 Offensive coordinators will often take advantage of this gap by utilizing tight ends to run slants or even a crossing pattern in that area. A good tight end that knows how to run routes (like Tony Scheffler and Brandon Pettigrew) can very easily take advantage of the open space and gain separation from their defender. Plays like these generally don’t result in massive gains for an offense, but it’s a quick, easy way to pick up five to seven yards and set up deeper throws later in the game. Given the fact that the Panthers are already depleted at the linebacker position, I would expect the Lions offense, which loves to utilize tight ends, to do much of the same this week.