Share All sharing options for: On Paper: Detroit Lions Vs. Carolina Panthers

Last week, the Carolina Panthers struggled to do anything right. They lost the turnover battle, they gave up a special teams touchdown, they were sacked five times and failed to score a touchdown. Over in Chicago, the Lions did not fare any better. Detroit lost six turnovers, also gave up a special teams touchdown, and only scored a touchdown when the game was theoretically over, on their way to a 37-13 shellacking. Both teams are obviously looking to rebound in a big way. Carolina needs a win to keep the Cam Newton Optimism Train on the tracks. Detroit needs a win to keep playoff hopes alive and well. The Lions are seven-point favorites at home, but I can't help but feel a little weary after last week's game. Let's go to the charts. 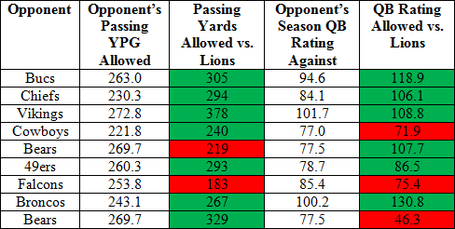 No way to sugarcoat it, Matthew Stafford had an absolutely terrible outing in Chicago. He put up a ton of yards, but he also attempted a franchise-record 63 passes. It was only the third time this season Stafford did not exceed the defense's average passer rating allowed. Jim Schwartz tried to do damage control last week by blaming the wind, but many are worried that Stafford's broken finger may be the culprit in Stafford's woes. Sunday will likely reveal what the true problem is. Obviously, there will be no wind in Ford Field, so if Stafford's struggles continue, there is something else going on.

The chart tells us that this Panthers pass defense is just below average. They've only held three opponents below their passing yards average and they've held four opponents below their passer rating average. However, that includes holding Aaron Rodgers to a rating of 119.9 and Drew Brees to 100.1; not exactly spectacular outings by the defense. Digger deeper into the statistical world reveals a pass defense that is pretty non-threatening. They Panthers rank 28th in passer rating allowed, 30th in yards per attempt allowed and have only tallied 17 sacks in nine games (26th). This is a perfect opportunity for Stafford to bounce back. Lions +2. 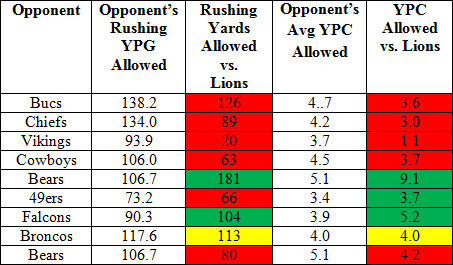 The Lions couldn't keep their upward trend in the running game going last week. However, this was likely due to falling behind by 20 points in the first half. Jahvid Best continues to be MIA with his concussion and will likely be unavailable until after Thanksgiving. While the Lions have capable backups, the problems in the running game run much deeper than the men in the backfield. 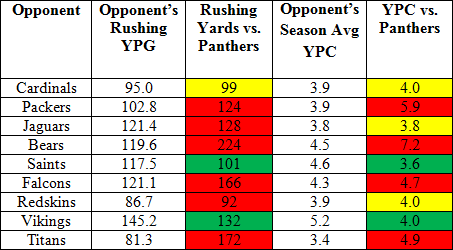 Here's the good news: the Panthers cannot stop the run. They've yet to hold an opponent under 90 yards. They've only held two opponents under averages in both yardage and yards per carry. They are giving up 4.7 a carry, which ties them for 25th in the league. They are not good. I don't expect the Lions to run all over them, but I do expect them to be just effective enough to make the play-action a plausible threat. Lions +1. 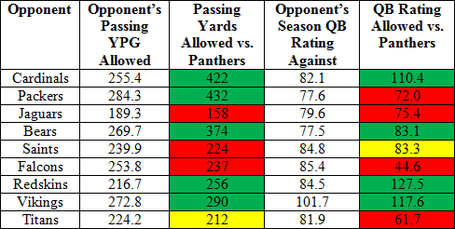 Cam Newton has been continuing a very successful rookie season ever since he made a splash in the first two weeks of the season. Though his yardage has gone way down, he continues to perform at an above average level. The Panthers are 13th in passer rating, seventh in yards per attempt and have allowed 22 sacks (T-17th). The Panthers have thrown 10 interceptions, however, which is 20th in the league. So the Lions will have an opportunity to force some turnovers on Sunday.

It bears repeating that the Lions have yet to face a great passing offense this season. They've only faced one team averaging more than 250 yards a game and only two teams with a passer rating above 85. That fact aside, the Lions are continuing to hold opponents to numbers typically lower than their averages. Only a third of their opponents successfully reached their passer rating averages against the Lions, and none have since the Monday night game. All the other statistics continue to impress: fourth in passer rating allowed, seventh in sacks, first in yards per attempt. The only statistic the Lions pass defense looks average in is completion percentage, where they sit exactly in the middle at 16th.

This should be an excellent matchup between two above average units. The key will be for the Lions defensive line to make sure Newton isn't allowed to extend the play with his feet. This will be Detroit's biggest test through the air since the Cowboys game, when they were burned for 331 passing yards. They will fare better this week, but Carolina should have mild success. Draw. 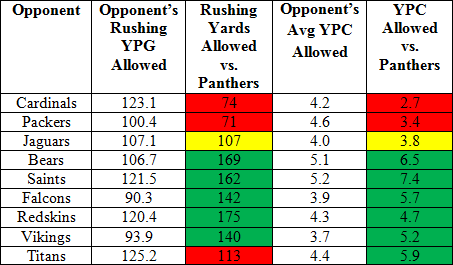 Yikes. The Panthers have been dominating their opponents on the ground since Week 4. Of course, a lot of this is due to Newton's mobility, but this is still very impressive. And the Panthers also still have DeAngelo Williams and Jonathan Stewart, who have combined for 748 yards on 158 carries (4.7 a carry). Newton is averaging 5.3 a carry and has a whopping seven rush touchdowns (only LeSean McCoy and Adrian Peterson have more). In other words, when the Panthers get into the red zone, the Lions will need a spy on Newton. 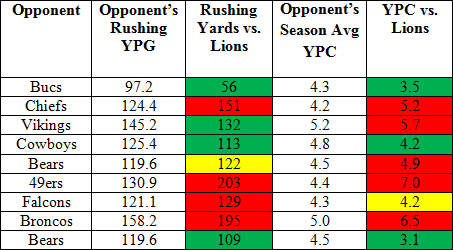 Every week, I seem to stumble upon an article attempting to defend the Lions run defense. Typically, I have been giving the articles little credit, as the point always seemed to be "if you take away all of the bad runs, they're actually good!" However, this week, the people over at Smart Football offered a different argument in favor of the Lions run defense. According to the article, the Lions are giving up a "successful" run at the fourth lowest rate in the league. You can read the article here for the specifics on what is defined as a successful run, but what it basically boils down to is: at least four yards on first down, half of the remaining yards to go on second down and a first down or touchdown on third down. Of course, the importance of giving up a lot of explosion plays on the ground cannot be ignored. The Lions have given up ten rushes of over 20 yards (T-fifth most) and five rushes of 40+ yards (most in the league).

In the Lions' nine games, they have faced eight opponents with a rushing offense ranked in the top 12. This week, they face another tough challenge. The key, as it has been all season, will be preventing the long run. I think the Panthers get at least one big play from Newton, but I think, otherwise, the Lions will hold the Panthers close to their 127 yards per game average. Panthers +1.

The Lions end up with a mild +2 advantage. This may come as a surprise to many predicting a huge blowout in favor of the Lions. But we must remember that although the Panthers are 2-7, they were within a score against the Packers, Bears and Saints. The Lions clearly have the better team, but the Panthers have proven that they can hang with the best of the NFC. I'll take the Lions in a close, but comfortable game. Lions 27, Panthers 20.