Of all the great stories that came out of the Panthers game (Matthew Stafford's rebound, another double-digit comeback, etc.) none was more impressive than Kevin Smith's 201 yards from scrimmage and three touchdowns. It was unexpected from most, inspiring to all. And while his day was great, he got a lot of help from his offensive line, especially on his big play: his first rush of the game. Let's break it down.

Kevin Smith's first rush didn't even come until the second quarter, making his 140 yards rushing that much more impressive. Here's what the play is supposed to look like: 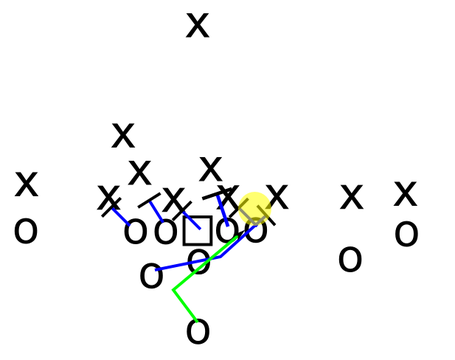 The play is a simple counter run. The offensive line all blocks to the left, creating the illusion of a rush that way. The man above the left tackle and left guard is Brandon Pettigrew, who is in motion from right to left at the snap. He is the only man not showing run-left. Instead, he comes across the line to take on the defensive end, who is purposely left unblocked by Gosder Cherilus. Kevin Smith is supposed to take the handoff to the left, further creating the illusion of a rush that way, and then cut right. The yellow circle marks where the hole should be and where Smith will be looking.

The key to this play is Cherilus and Pettigrew. It is Cherilus' job to seal the hole from the inside, making sure the defensive tackle and linebacker behind him fail to get to the outside. It is Pettigrew's job to hustle over to the right side of the line and seal the hole from the outside before the defensive end can read the play and cut inside. Did they do their job? Take a look (you can watch the play here): 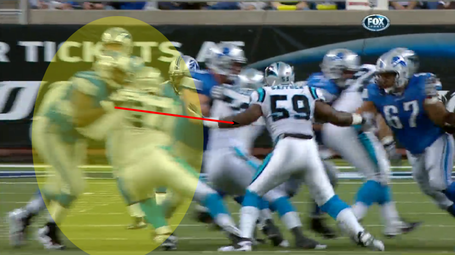 Cherilus is dominating the defensive tackle. In fact, he's got the tackle going so far backwards that he also takes the linebacker out of the play by pushing the tackle into him. Impressive stuff from Cherilus. But the play won't work unless Pettigrew does his job. Let's check in on him: 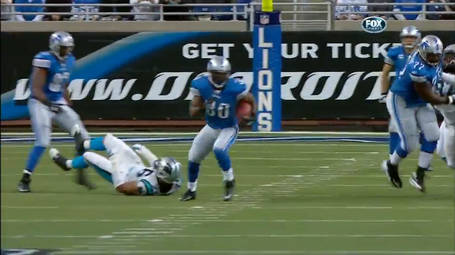 Pancakes, anyone? Smith is left with a huge hole, and he hits it with impressive speed. From then, it's one-on-one with the deep safety, then a footrace. Smith makes the safety miss, but slows down enough to get caught from behind.

This play was a perfect example of what led to Smith's success on Sunday. The offensive line had an extremely impressive day, but Smith also displayed great vision and quick, correct reads. Of course, it must be mentioned that the Carolina Panthers have a less-than-impressive run defense (ranked 30th in yards allowed, 27th in YPC). But if the offensive line and Smith can continue to work in harmony like this, the Lions may have a decent enough ground threat to keep defenses honest. And when that happens, Stafford will make them pay.