Share All sharing options for: Breaking Down The Green Bay Packers Offense

The long-awaited game of the year is almost here. On Thanksgiving Day, the Detroit Lions will take on the green and gold bulldozer better known as the Green Bay Packers. Of course, the defending Super Bowl champions and their offense have been an unstoppable force that has torn through the league so far. They are one of only three teams to average more than 30 points a game -- the Lions and Saints are the other two -- and the only team in the league to average more than 35 points a game. Thursday afternoon, the Lions defense will have to play the role of the immovable object to the Packers unstoppable offense. In today’s post, I will try to break down and explain what exactly makes the Packers offense so hard to stop.

To me, there are three key reasons why the Packers offense has been able to run over teams this season: Aaron Rodgers, the receiving crops and Mike McCarthy. The most noticeable of the three is, of course, Aaron Rodgers, who is simply having one of the best seasons for a quarterback in NFL history. If you were to project his current numbers for a full season, it would amount to 5,067 passing yards, 50 touchdowns and just six interceptions with a 72 percent completion rating and a 128.8 passer rating. If he were to keep up that pace for the rest of the season, he would set a new NFL record for passer rating and completion percentage, while tying the record for most touchdowns. He would fall about 17 yards shy of tying the single-season record for passing yards.

The second most important and really the least talked about reason as to why the Packers offense is so explosive is Packers head coach Mike McCarthy. Before joining the Green Bay Packers, McCarthy served as the New Orleans Saints offensive coordinator from 2000 to 2004 and San Francisco 49ers offensive coordinator in 2005. The interesting part is that none of those teams had high-octane offenses. In fact, most of those offenses were run oriented, as McCarthy’s teams ran the ball more than they passed it in two his six seasons as a coordinator. But as LeCharles Bentley, the former Saints center who played under McCarthy, explains, Mike McCarthy always wanted to spread the field but couldn’t do so with the teams he inherited.

With the Packers, however, that is not an issue. When Mike McCarthy took over in 2006, the Packers already had a stable quarterback situation with Brett Favre there and 2005 first-round pick Aaron Rodgers developing. He also initially had two reliable receivers in Javon Walker (later traded to the Broncos) and a younger Donald Driver. Over the years, both McCarthy and general manager Ted Thompson have been able to do what many teams failed: draft receivers in the middle of the draft and turn them into studs. None of Green Bay’s current corps of receivers have actually been drafted in the first round. In fact, the earliest drafted receiver on the Packers roster is Greg Jennings, who was selected with the 20th pick in the second-round of the 2006 NFL Draft.

As far as scheme is concerned, the Green Bay Packers basically run a West Coast offense. As most people know, a West Coast offense is usually built around a quarterback that can go through his progressions quickly and deliver the ball with pinpoint accuracy. The goal of the West Coast is really to get the ball to fast playmakers in space as quickly as possible and let them make plays on the ground. This is quite evident when you look at the numbers Packers wideouts have been putting up. For example, 328 of Jordy Nelson's 756 yards have come after the catch, while 254 of Greg Jennings' 761 yards have come after the catch.

For this week’s play breakdown, I am going look at Aaron Rodgers' 70-yard touchdown throw to James Jones in their game against the Atlanta Falcons from earlier in the season. Early in the game, the Falcons were able to have quite a bit of success against Rodgers, holding the Packers to just six points in the first half. They accomplished this by brining blitzes from an array of angles, which resulted in two sacks of Aaron Rodgers and just two field goals in two red zone trips. In the second half, however, the Packers figured out the Falcons game plan and Aaron Rodgers torched the Falcons defense for two long touchdowns. 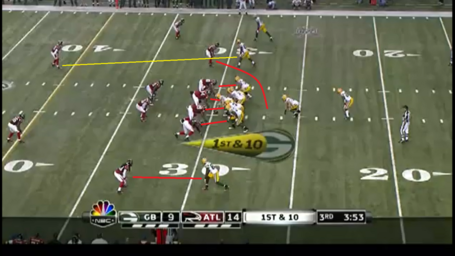 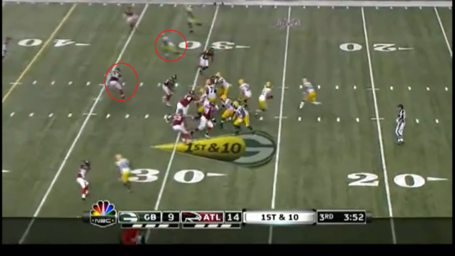 On this play, the Falcons are in their nickel package and do something really risky (against Rodgers) by bringing a corner blitz. To cover for the blitzing corner, the Falcons rotate one of their safeties over to James Jones and decide to go into a cover one shell, where only a safety is defending the deep zone of the field. Rodgers immediately realizes what is happening and looks towards James Jones from the get go. Eventually, Jones just runs by the safety on the play, and Aaron Rodgers delivers an accurate ball to him for a 70-yard touchdown play. 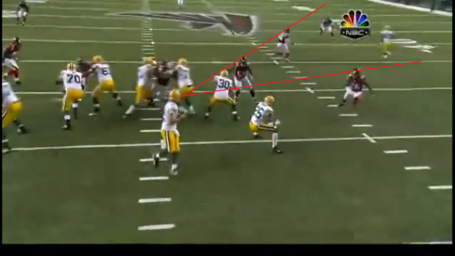 Overall, I think something has to give in this game. The Packers come in ranked as the best offense in football, but the Lions are also the best passing defense the Packers will have faced thus far in the season. I think that the Packers offense will be in for a surprise with how good the Lions defense is, especially the back seven, and will end up scoring fewer than 30 points for only the fourth time this season in a losing effort.