Share All sharing options for: On Paper: Detroit Lions Vs. Green Bay Packers

Here we are again. Another boring Thanksgiving Day. The Lions are playing for nothing more than the opportunity to not embarrass themselves on a national stage. Get ready to shove stuffing down your throats to kill the pain of another Lions loss ... what? What's that you say, little voice in my head? The Lions are 7-3 and in the midst of a heated playoff race? The Packers are coming into this game undefeated, but on a one-game losing streak at Ford Field? Why, that sounds like a somewhat entertaining matchup. Yes, yes it does, and I think everyone in Detroit agrees.

Ford Field will be rocking on Thursday as the Lions face their toughest opponent of the year. Vegas isn't giving Detroit much of a chance, making them seven-point underdogs. However, the word of the almighty chart has yet to be heard. 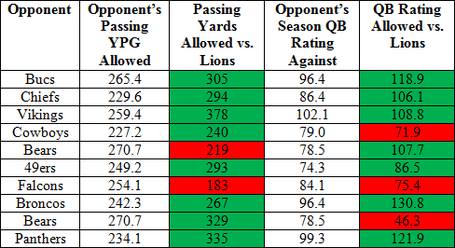 What a rebound it was for Matthew Stafford. Starting with the second half of the Bears game, Stafford had three of the worst quarters of his career. However, in the last three quarters of the Panthers game, Stafford played some of his best football. He spread the ball around on his way to a 335-yard, five-touchdown performance. This chart is looking mighty green, and the offense is starting to get a little more consistent. 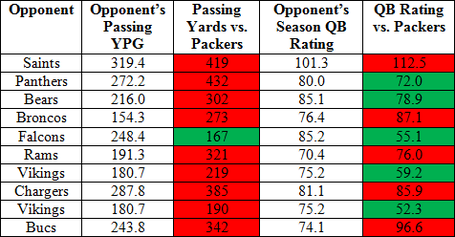 ... and this looks like a beautiful matchup for the Lions. The Packers have only held one opponent below their passing yard average and have given up the second most passing yards in the league! The Lions are going to crush the Packers defense!

Eh ... not so fast, my feline friend. The Packers have held half of their opponents below their passer rating average. In fact, as a passing defense they actually rank 11th in terms of passer rating allowed. On top of that, their 19 interceptions are the most in the league by four, and their 24 sacks put them at 15th in the league. In all, the Packers pass defense is much better than people are giving them credit. Still, I would consider them only average, or perhaps slightly above.

The key to this matchup will be the Lions taking what the Packers give them and Stafford not getting too greedy and forcing passes. I'd love to see a big day from Titus Young. His ability to run slants could be invaluable on third down against an aggressive Packers defense. If Stafford decides to spread the ball around, like he did in the second half last week, the Lions should have success. Lions +1.5. 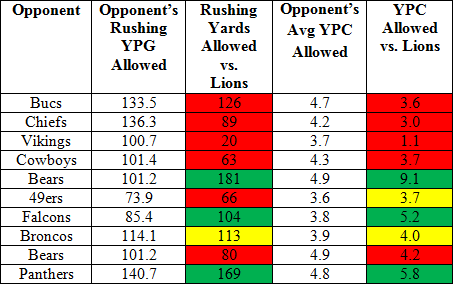 Well that was a bit unexpected. Kevin Smith's 140 yards against the Panthers was perhaps the most impressive, unexpected performance by a Lion this season. It's hard to know if this kind of success will continue, but if I had to venture a guess, I'd say no. As evidenced by the chart, the Lions have actually been playing better on the ground as of late, but the struggles of the offensive line continue. I like Smith and what he showed against Carolina, but if the offensive line can't keep it up, it won't matter who is in the backfield. 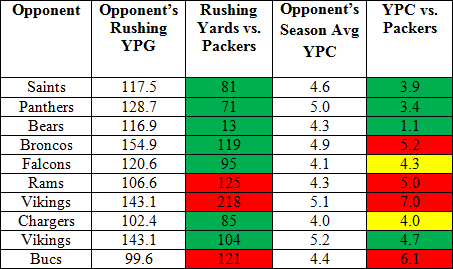 The Lions should have an average day on the ground, which is right around 100 yards total. That's enough to keep the Packers somewhat honest on defense, but not enough to change the game. Draw. 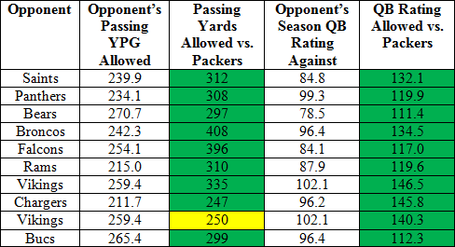 The Packers pass offense may rank third in the league by yardage, but there's no doubt in my mind that it is the best in the NFL. Their team passer rating is first in the league by 25 points (127.4 to New England's 102.5). They've thrown for six more touchdowns than anyone else. They've thrown only five interceptions (second fewest). They're first in yards per attempt (9.7) and first in completion percentage (72.3). This is the best passing game the Lions will face in a decade ... well, at least until they play the Packers again. 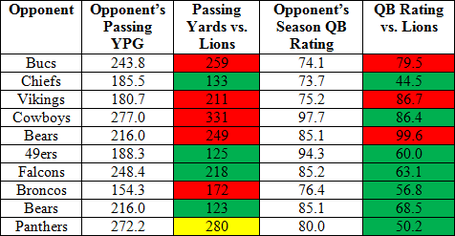 But the Lions have a pretty good weapon on defense. They've only allowed three quarterbacks to reach their passer rating average, while holding the past five opponents below a 70 rating.

Aaron Rodgers has yet to have a passer rating below 100, and the Lions have yet to cede a 100 passer rating. Something will give in this matchup, and unfortunately, I think it will be the Lions defense that falters. I really think the Packers passing attack is one of the best in history. Packers +2. 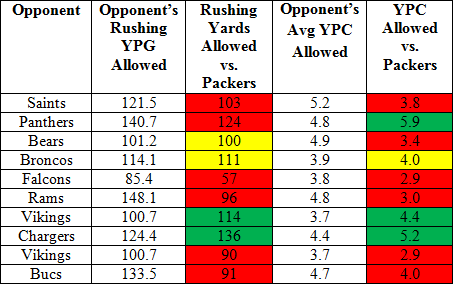 The Packers running attack continues to be pedestrian. It's not great, but it doesn't have to be. Their 3.9 a carry ranks them at 24th in the NFL, they only have six rushes of 20 or more (T-16th) and only one of 40 or longer (T-13th). Their running attack is basically enough to get by, but nothing to fear. 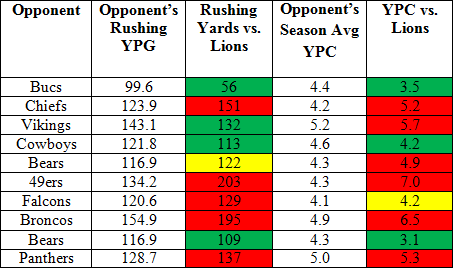 Which is music to Lions' ears. The Lions struggles to stop the run continue. As I noted last week, it's not as bad as it looks, but it isn't good either. The Lions continue to give up big plays that hurt them. But, as noted, the Packers don't pose a deep threat on the ground, therefore this matchup is another draw.

So the Packers come out with a tiny +0.5 advantage, predicting a much closer game than Vegas is. However, there are some factors that will affect this game that I don't cover in this post -- specifically, home-field advantage. The Thanksgiving game has been sold out for a while now, and the crowd at Ford Field should be bumping. It is imperative for the Lions to come out strong early to keep the crowd in the game and keep Aaron Rodgers from hearing the play calls. Last week, the Lions faltered in the first quarter and took the crowd out of the game. They'll need every advantage this week to beat the undefeated Packers, so a slow start would be devastating. However, I think Stafford will continue his success that he showed in the second half of the Panthers game and the Lions will pull off the upset. I don't normally go against my own numbers, but it's Thanksgiving and a special one at that. Lions 38, Packers 35.