Through the first seven games of the season, it was obvious that Gunther Cunningham had cut down on his aggressiveness in terms of pass rush. The Lions hardly ever blitzed. And while their sack numbers were down, their pass defense was actually excelling. Through seven weeks, the Lions ranked second in yards per attempt allowed, fourth in passer rating allowed and ninth in passing yards allowed.

However, against the Denver Broncos, we saw a very different strategy from Cunningham. The Lions were sending pressure all day and daring Tim Tebow to do something about it. According to Pro Football Focus, DeAndre Levy blitzed 19 times (!) alone. Needless to say, Cunningham's strategy worked, as Tebow completed only 46.2% of his passes, was sacked seven times and turned the ball over twice. Here's how it happened.

Here's what Tebow is looking at directly before the snap: 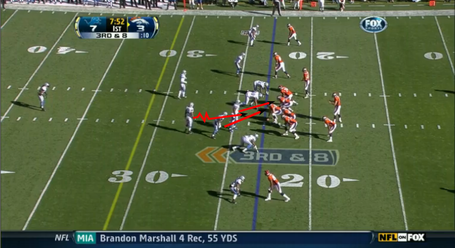 First thing I noticed is how the defense is trying to confuse Tebow. There are only three linemen in the three-point stance, while three defenders are casually strolling near the line of scrimmage. Tebow likely doesn't know where the pressure is coming from and the Lions are trying to take advantage of his inexperience to force a mistake.

At the snap, two defenders immediately rush, while DeAndre Levy comes on a delayed blitz. It's also worth noting that the defense is playing a very tight man-coverage, challenging Tebow to make a quick, accurate throw.

Surprisingly, none of the added pressure ends up getting to Tebow, although the pocket in front of him quickly gets smaller and smaller. Fortunately for the Lions, Cliff Avril completely beats his man and strip-sacks Tebow. If Tebow wasn't quick on falling on the ball, many of the blitzing defenders were there to fall on it. While Tebow didn't have a ton of time to get rid of the ball, the confusing blitz may have bought the Lions the extra time needed for Avril to get to the quarterback.

This is a truly incredible sign that Cunningham doesn't respect Tebow. Check out the pre-snap formation: 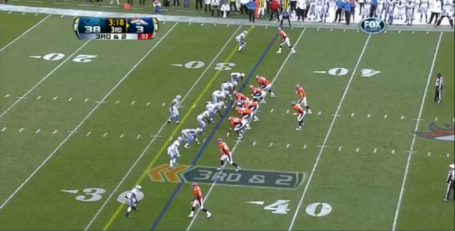 Ten Lions defenders within two yards of the line of scrimmage. I don't think I've ever seen that in a non-goal line situation. Amari Spievey is playing deep safety and is just off-screen. Here's what happens after the snap: 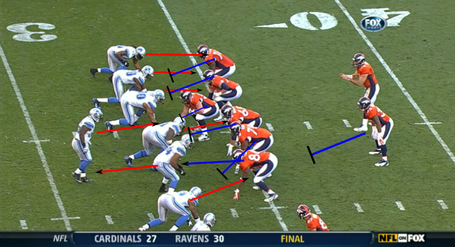 Again, every receiver is defended by man coverage. The Lions are blitzing two defenders on this play: Stephen Tulloch in the middle of the line and Louis Delmas, who is actually in a three point stance at the top of the screen. Again, the blitz is disguised. Tulloch is moving around pre-snap showing both blitz and coverage looks. The confusion comes from Levy and Tulloch. As a lineman, you can't be sure which is defending the tight end and which is sending pressure. In this case, Tulloch brings the pressure and Levy has tight end duty.

The Broncos do a good job protecting Tebow from this confusion, but Delmas comes bearing down on Tebow unblocked. This causes a quick throw off of Tebow's back foot. What happens when an inaccurate quarterback is forced to throw quickly off his back foot? This: 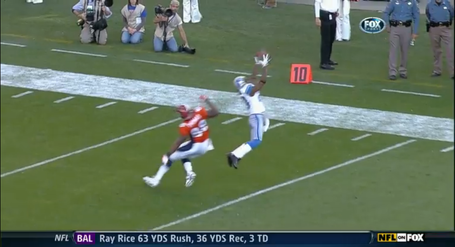 Of course, Chris Houston doesn't end up bringing this one down for the interception, but the Lions still forced a fourth down and would eventually force a turnover on downs on the subsequent play.

These were just two of the many examples of Cunningham sending confusing packages Tebow's way. Cunningham banked on the fact that Tebow's inaccuracies and inexperience would force him into mistakes. He was right. The Lions defense dominated the afternoon.

Through eight weeks, the Lions have had one of the best pass defenses in the league. Up until last week, they relied solely on the defensive line to send pressure. But last week, they showed that if a quarterback is not on top of his game, they can send the house and be an even more effective defense.