In the first half, the Detroit Lions were doing an excellent job of holding Aaron Rodgers in check. Rodgers was only 9-15 for 65 yards and a touchdown at halftime. But things didn't go as well in the second half. The Lions quickly found themselves without the services of Chris Houston and Louis Delmas, who both were injured in the first half. In their absence, the secondary failed to step up and allowed Rodgers to finish with over 300 yards and two touchdowns. Let's break down a couple plays highlighting some secondary mistakes made by the Lions in the second half.

The first play is the most obvious mistake made by the secondary in this game: the 65-yard touchdown pass to James Jones. Watch the play below.

This a failure on two parts. First, obviously, is Amari Spievey. To be fair, it is unclear what his responsibility was on this play. However, based on the positioning and play of the other safety (Chris Harris), who was playing deep on the left side of the field (from an offensive viewpoint), it appears Spievey's responsibility was deep right. 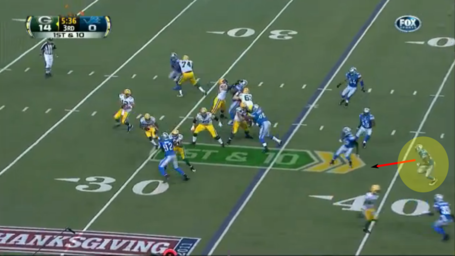 Obviously, he does not stick to his responsibility. The play-action sucks Spievey in, but, as you can see, it also sucks the linebackers in near the line of scrimmage. This opens up a crossing route over the middle of the field that would've been complete if Rodgers had decided to go there with the ball.

But Rodgers, instead, decided to go deep. Why? Because Brandon McDonald was completely beaten in coverage. Here's how that happened: 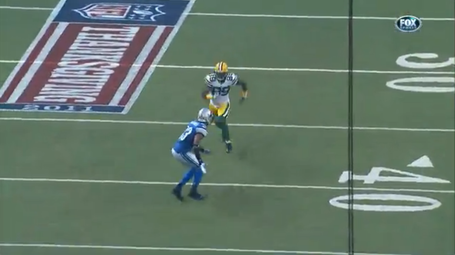 Okay, so far so good. McDonald has his hips turned to the inside, which is the correct alignment given that his body position is on the outside of Jones at this point. He is currently in perfect position for the play, which will be a post to the center of the field. However, McDonald soon reads the play as a fly and turns his hips to the outside to turn and run with Jones. 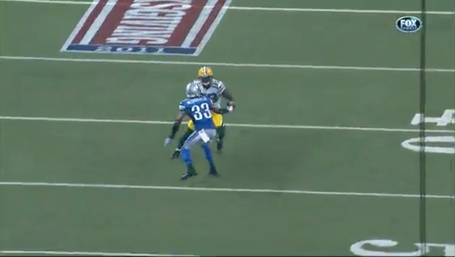 It is at this exact moment that Jones makes his cut to the middle. Now that McDonald's hips are facing the sideline, he has given up the center of the field (where he probably thinks Spievey is waiting). 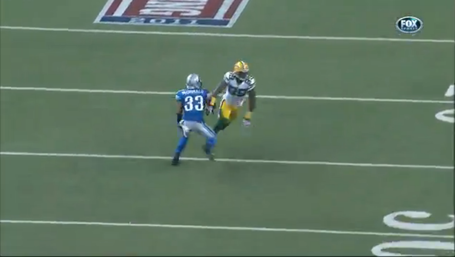 At this point, Jones has no problem outrunning the entire Lions defense, which he has left in the dust. McDonald injures himself in pursuit, leaving the Lions with slim pickings in the secondary.

This next play hurt the Lions deeply when they started to mount their comeback. Down 24-8, the Lions defense needed some stops. They forced Rodgers into several third downs, but the beaten-up secondary failed seal the deal. Here's an example: 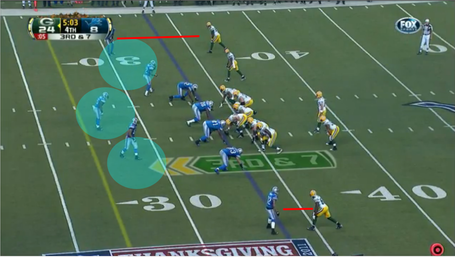 The Lions are in a nickel formation with Eric Wright at the top of the screen, Aaron Berry at the bottom and wide receiver Rashied Davis lined up in the slot. Spievey and Harris are deep, just off-screen. It appears Berry and Wright are playing man while Davis is in zone with the two linebackers. Davis' inexperience at corner and lack of chemistry with the linebackers makes this an easy conversion for Rodgers. 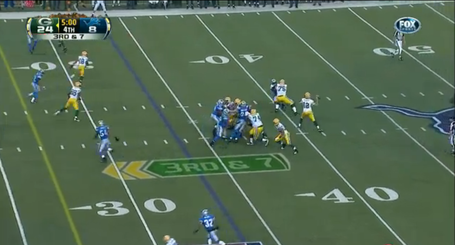 With Wright tied up with his man at the top of the screen, Randall Cobb (18) is able to find plenty of open space. Davis fails to notice this, as his eyes are focused on Rodgers. It appears Jermichael Finley is open on this play, but Stephen Tulloch is just off screen and has a chance to stop Finley before picking up the first down. Rodgers has an easy read to Cobb, and he easily picks up the first down to basically seal the game.

It's impossible to know what would have happened in this game had Houston and Delmas not been forced out of the game so early. The offensive struggles, obviously, would have continued, but the Lions likely would've been around much longer. But some of these mistakes were made by starters, and that cannot continue. The Lions don't catch a break in scheduling, as their recovering secondary will now have to travel to New Orleans, where Drew Brees just dismantled the New York Giants defense. Uh oh.