Share All sharing options for: Breaking Down The New Orleans Saints Offense

After somewhat struggling against the league’s top offense, the Green Bay Packers, last week, the Detroit Lions will once again have their hands full as they are set to face Drew Brees and the high-powered New Orleans Saints offense. The Saints are coming off their Monday night win over the New York Giants in a game in which they scored 40-plus points for the third time this season. In today’s post, I will introduce you guys to their offense and what makes them truly special.

How the Saints have turned around their franchise in recent memory is always one of the biggest inspirations for suffering sports teams and cities. Just six years ago, the Saints were in the same boat as the Lions when they finished 3-13 and Detroit finished the year 5-11. In fact, both teams would have ended the season with the same record of 4-12 had it not been for Jason Hanson and his field goal in the final seconds of the two teams' Christmas Eve game in San Antonio that year. (The Saints weren’t able to play that game at the Superdome because of Hurricane Katrina.)

Since then, the Saints have become one of the elite teams of the NFL with Drew Brees at the helm and Sean Payton providing the guidance. The two of them, along with the numerous other pieces around Brees such as second-year tight end Jimmy Graham, free agent signing Darren Sproles, Marques Colston, Devery Henderson, Lance Moore, and Robert Meachem, have turned the Saints into a true offensive powerhouse. In the last five seasons, the New Orleans Saints have had the top ranked offense twice, and they are currently the second highest rated offense in football just behind the Green Bay Packers.

The biggest difference is probably the fact that the Saints have a fair bit more size than the Packers do on offense, especially this season with the emergence of 6-foot-8 tight end Jimmy Graham. To me, he is just as dangerous of a weapon in the red zone with a guy like Drew Brees throwing him the ball as Calvin Johnson is for the Lions. But he isn’t the only "big" receiver the Saints can throw out there. There is also 6-foot-2 Robert Meachem and 6-foot-4 Marcus Colston; both are players that will attract targets in the red zone and everywhere else on the field. For that reason, I think the Lions defensive backs, who are more geared toward covering fast receivers, and linebackers may very well have more trouble on Sunday than they did last Thursday against the Packers.

On the other hand, the Lions defense could very well take advantage of the fact that the Saints use their size and turn it to their favor much like the Texans, Jaguars, Bucs, and Rams have done this season. In all four of those games, Brees threw multiple picks, often times because he was simply trying to throw it up to his receiver like Matthew Stafford does with Calvin Johnson.

For this week’s play breakdown, I will show you two plays below -- one where Brees throws it up and ends up throwing a pick, while the other shows a touchdown throw.

In the first play shown in the series below, the Saints are in a split-back formation with Darren Sproles in the backfield, while the Texans are in their standard 3-4 cover-two shell. The Texans try to cover Jimmy Graham with Brian Cushing (who is showing blitz at the beginning), but ends up jamming Graham at the line, which is shown in the second still shot. However, Drew Brees sees that Graham has beaten the initial coverage and throws it up to him immediately without seeing where the safety is. The safety, Danieal Manning, simply reads the throw and picks the pass off. Basically, the plan for the Texans from the beginning was to cover Graham with a safety and give him a little jam at the line, but Brees missed that and ended up throwing a pick. 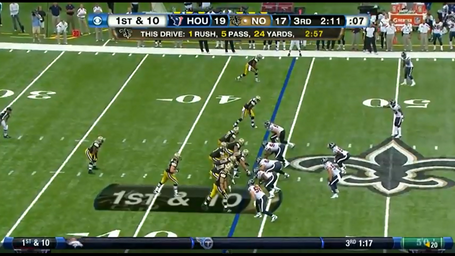 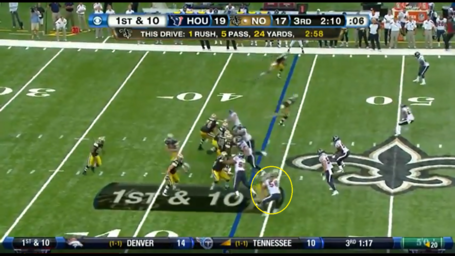 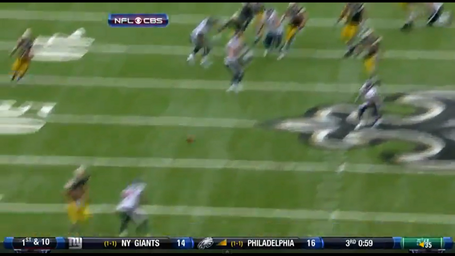 In the second play, the Saints have spread out the field with four receivers and Darren Sproles in the backfield, while the Texans have countered with their dime package and four down linemen, and it looks like they left a linebacker in there just to shadow Sproles. That left them with just one safety up top to cover the entire back zone. In addition, Graham beats his man off the line from the get-go and is basically wide open with his size for the touchdown. 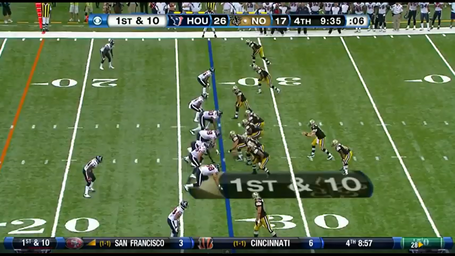 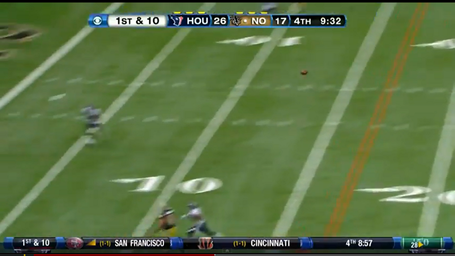 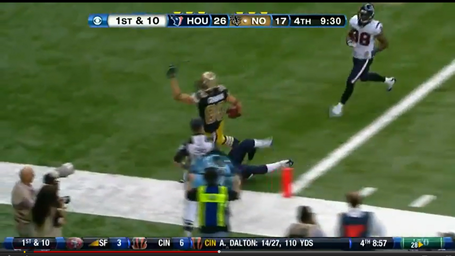 What I showed in the two plays is basically how and why Drew Brees loves to throw to Jimmy Graham. With his unmatched size and underrated speed, Graham can pretty much beat any type of coverage a defense throws at him. When you combine that with the fact that Brees might be the most accurate quarterback in football, you really do have a lethal combination. However, there are ways to stop them as shown in the first play, which brings me to the key for this game: coverage disguise.

The fact is that Drew Brees, even with his supreme accuracy, is a gambler. His 11 interceptions on the season are 10th in the league right now and just two less than what Matthew Stafford has. He was also second in the league last year in interceptions. Still, Brees is an extremely difficult quarterback to stop and the fact that the Lions will be on the road in a hostile environment like the Superdome won’t help their chances. They have had a ton of time to prep for the Saints, as there are nine days in between games since they played last Thursday, while the Saints will only have five to prep for the Lions defense since they last played on Monday, but I still like the Saints chances in this game.