Easily the most frustrating part of the Lions' near-collapse against the Minnesota Vikings was second/third-string quarterback Joe Webb running wild on the Detroit defense. In the post-game press conference Jim Schwartz gave Webb a lot of credit, saying that they threw a lot of looks at him and Webb countered nearly all of them:

Let's take a look at some of these defensive schemes and break down why they failed against Webb. WARNING: PAINFULLY GRAPHIC IMAGES OF BAD DEFENSE AHEAD

The only place to start for this article is Webb's 65-yard scramble in the third quarter. It was third-and-10 and the Lions called an extremely aggressive defense to stop Webb. If you want to subject yourself to the pain, the video is below: 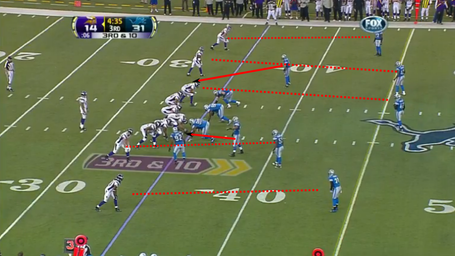 The Lions send six rushers (two blitzers) against the Vikings' four-wide set. This leaves the five men in coverage in man-to-man against five receivers. The Lions are clearly trying to force Webb to make a mistake on third-and-long. With six pass-rushers going against five blockers, the advantage is on the Lions side to force Webb into a quick decision. Here's what happens: 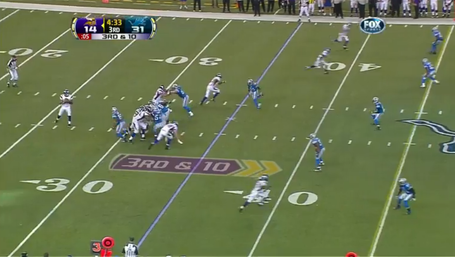 The blitzing DeAndre Levy draws a lineman, freeing up Cliff Avril to head straight toward Webb. Here's where the play breaks down. With additional pressure coming from the top, Avril must force Webb to either stay in the pocket, or direct him toward the extra pressure. Instead, Avril does not keep contain on his side and allows Webb to escape where there is no help behind Avril. 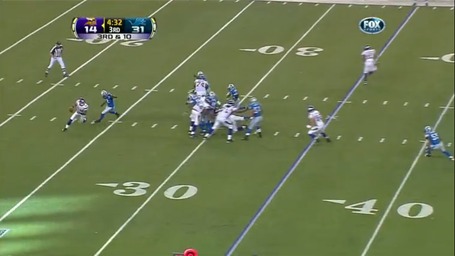 At this point, the play is mostly over. You can see that if Webb would've been forced to his left, he would have run into trouble. But at this point, the only person who has a chance at making the stop is Stephen Tulloch. All other defenders in coverage have been drawn to the top of the screen by the men they are covering. Tulloch takes a bad angle and... 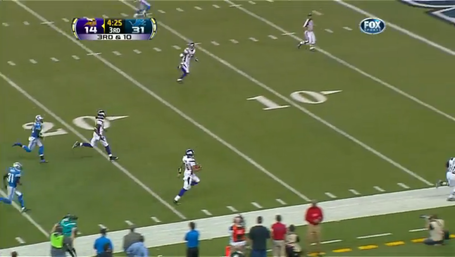 In my opinion, this was too aggressive of a play call by Gunther Cunningham. I understand the logic behind forcing Webb into a quick throw on third-and-long, but you are asking too much of your pass-rushers here. Webb is incredibly hard to contain, and when they have very little help behind them, the defense is way too vulnerable to allowing a huge play. Avril deserves some blame for this play, but the play call didn't put him in a favorable position.

The safer play call seems to be keeping a spy on Webb, which, according to Schwartz, was also tried on Webb. Fast-forward to the fourth quarter, the Vikings are facing another third-and-ten. This time, the Lions give a very different look: 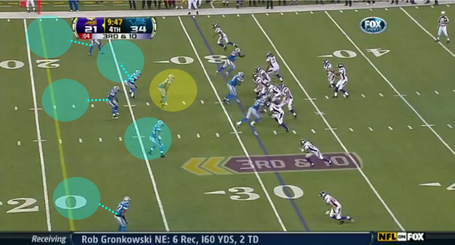 This time, the Lions only send three pass-rushers and have Avril as a QB spy. The rest of the secondary is in zone, with two deep safeties off-screen playing two-deep. Early on, things look good: 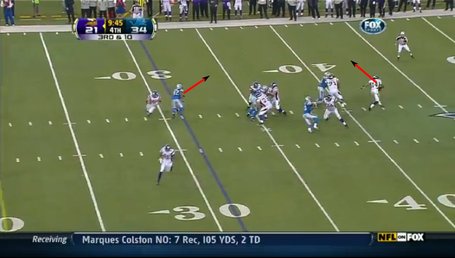 Webb can't find anyone open downfield and begins to scramble to his right. Avril follows him, but over-commits to that side by heading into the backfield. Webb reverses field, but the Lions are still in good position to stop him well before the first down markers. 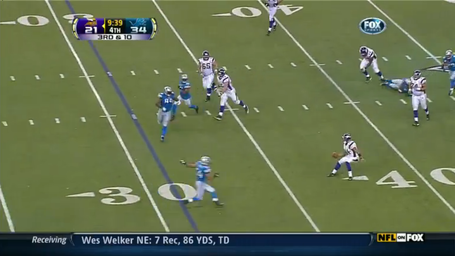 Levy is in position to make the play behind the line of scrimmage with Corey Williams and the hustling Avril bearing down on Webb. Levy does the one thing he cannot allow Webb to do, juke him to the outside away from the extra pursuit. 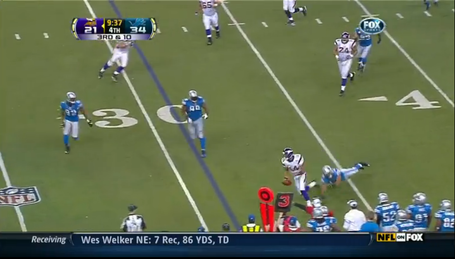 As a result, Webb picked up eight yards, the Vikings went for it on fourth down, easily converted, and eventually scored a touchdown bringing them within one score.

On this play, the call was correct, but the execution failed. Avril overcommitted on his spying duties and Levy just got straight-up embarrassed by Webb. But despite his initial mistake, Avril deserves a ton of credit for making the hustle play and stopping Webb before the first down. Check out where Avril comes from to make the tackle: 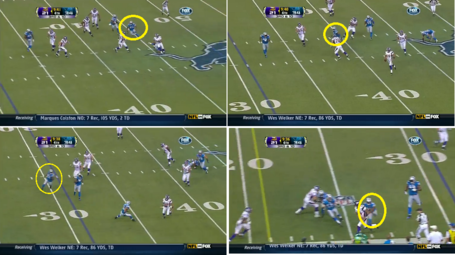 So what did work against Webb? Well, not much. But on the play they needed a stop the most, the Lions called the perfect play. Watch this play and all of its glory below (ignore the title): 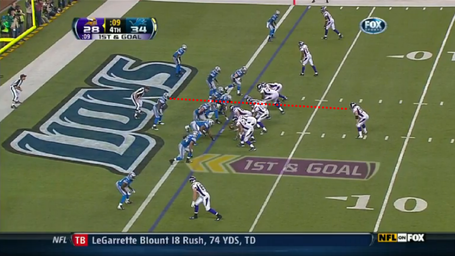 The Lions are again playing a very aggressive defense. This time, they are sending seven pass rushers. Obviously, there is no worry of giving up a "big" play, as the Vikings only need one yard. The key to this play is Stephen Tulloch, who is currently seen shooting eye-lasers at his responsibility on this play, Toby Gerhart. Tulloch quickly sees that Gerhart is not getting the ball and is helping in pass protection. Instead of rushing Webb immediately, Tulloch slides to where Webb is beginning to scramble. 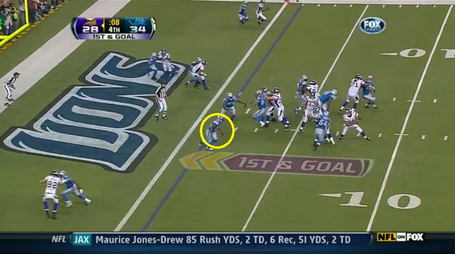 Even if Webb is able to elude DeAndre Levy (which we all know he will not), Tulloch is in the perfect position to stop Webb well before he reaches the end zone.

A lot of credit goes to Chris Harris, who has solid coverage on Kyle Rudolph, the intended receiver on the play. Webb didn't like what he saw out of coverage and immediately went into scramble mode.

For his great positioning, Tulloch was given the gift of recovering the game-winning fumble... 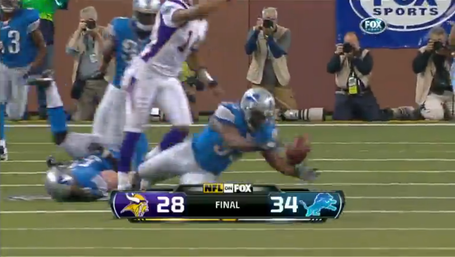 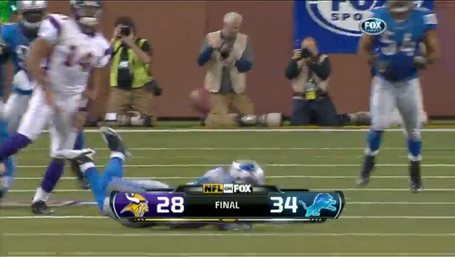