Breaking Down The Oakland Raiders Offense

Share All sharing options for: Breaking Down The Oakland Raiders Offense

This upcoming Sunday, the Detroit Lions will be taking on the Oakland Raiders in one of the most meaningful games the Lions have played in December. Usually, we Lions fans are in full on draft mode and looking forward to next season by this time of the year. This year, however, things are quite different, as the Lions are in the thick of a playoff race and are going to play a pretty good Raiders team on the road.

People that follow the NFL on a regular basis remember that the Raiders traded for quarterback Carson Palmer midseason. They shipped a boatload of picks, which included the Raiders' 2012 first-round pick and a conditional pick in 2013 for the 31-year-old Palmer. Clearly, both Hue Jackson, the Raiders head coach, and the Raiders front office believe in Palmer and think that he can lead them to the playoffs, but has he made them better or worse given the fact that he has basically been thrown into this offense without an offseason?

From a stats standpoint, the Raiders offense is actually doing worse with Palmer at the helm. Before Palmer was brought in, the Raiders offense was averaging 26.7 points a game and their lowest point total in any of those games was 23. With Palmer, things have changed quite a bit. Under him, the Raiders offense is managing only 18.6 points per game and was even held scoreless by the Kansas City Chiefs. On top of that, their offense has not managed to score in the 20s in the last two games, both being losses to the Dolphins and Packers.

Of course, it’s easy to sit here and blame the Raiders' offensive failures on Palmer alone, but that would be unfair. While Palmer has not helped the Raiders offense at times, realize that the Raiders would be forced to start either Kyle Boller or even Terrelle Pryor. Neither of them, I suspect, would fare any better than Palmer. Besides, the Raiders under Hue Jackson are a run-oriented offense and the loss of Darren McFadden in Week 7 against the Chiefs probably hurts much more than losing Jason Campbell. From the early injury reports, it doesn’t seem as if McFadden will be able to play against the Lions, either.

The thing that I think the Raiders offense should have done differently is that they should’ve run the ball with Palmer at the helm. Instead, Palmer is attempting nearly the same amount of passes as Campbell did at 33 per game (Campbell averaged 31.2 attempts per game). In the last few games, those numbers have gone up, as Palmer has attempted 41 and 42 passes, while Bush only received 33 carries over that span. Against a poor rush defense like the Lions, the Raiders would be smart to run the ball with Bush, even if he is averaging 3.9 yards per carry this season.

Since the Raiders are the best example of an offense that runs to set up the pass, I think this week would be a good time to draw up a play and show you guy what changes when teams execute play-actions and why they lead to big plays. In the play below, I am simulating the Lions playing their standard 4-3, wide-nine defense, but Louis Delmas is playing shallower due to the fact that the offense is in a running formation. This is a common occurrence in the NFL. 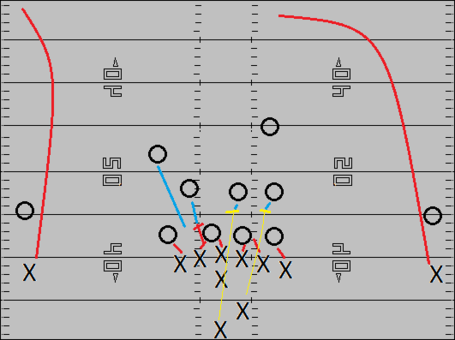 If the offense has a good running game, the defense should pursue the running back first and not worry about the pass. For the sake this play, let’s say that only Louis Delmas bites on the play-action and Amari Spievey is still in the back zone. If an offense were to run two deep routes, they would still have one receiver with a one-on-one matchup with a cornerback. The play would allow the line to give maximum protection for the quarterback with eight men blocking. If you have a receiver better than the opposition’s corner, plays like this could simply kill a defense. Just ask the teams that face the Pittsburgh Steelers and Mike Wallace.

Overall, the Raiders offense shouldn’t be the big issue on Sunday even with the Lions injuries. While Michael Bush and the Raiders running game is quite respectable, I feel that their offense is too one-dimensional at this point, especially with all of the injuries to their wide receivers. However, the Raiders offense will be a completely different one if it can get the ground game going. If they do, it will be a long day in Oakland for the Lions.