Share All sharing options for: On Paper: Detroit Lions At Oakland Raiders

After holding off the Vikings last week and Marion Barber fumbling away the game for the Bears, the Lions find themselves in a playoff spot once again. In order to stay there, the Lions will have to take down a talented Oakland Raiders team in a hostile environment this week. The Raiders are coming off of an embarrassing spanking by the undefeated Green Bay Packers. The Raiders are 7-6 overall and just 3-3 at home. The Lions are one-point road favorites this week. In other words, it's a toss-up. Let the charts decide their fates. 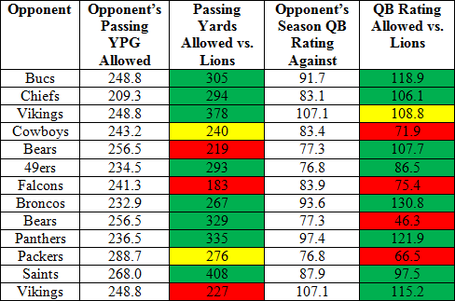 Last week, the Lions were surprisingly conservative against a banged-up Vikings secondary. They only managed 227 yards, but it was just enough to get the win. Overall, the Lions pass offense should still be considered near-elite. They rank eighth in passer rating, fourth in touchdowns, 11th in yards per attempt and third in plays of 40+ yards. 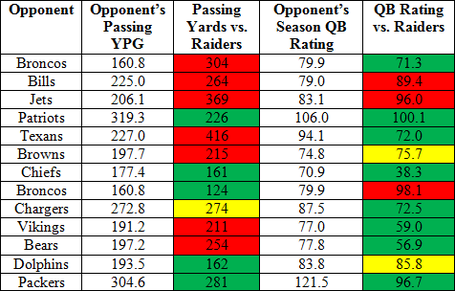 Despite their poor ranking, the Raiders pass defense looks to be pretty solid. They have only allowed one team to pass for a rating over 100 (Tom Brady) and are the only team to hold Aaron Rodgers below a 100 passer rating. The Raiders actually rank sixth in passer rating allowed (76.5), seventh in yards per attempt allowed (6.7) and have the fourth most sacks in the league (37). The Lions will have their hands full against the Raiders this week. I expect the Lions to perform slightly below their averages. If I had to put a guess on the stat-line, I'd say the Matthew Stafford finishes with around 240 yards, two touchdowns and an interception. That's still a win for the Lions. Lions +1.5. 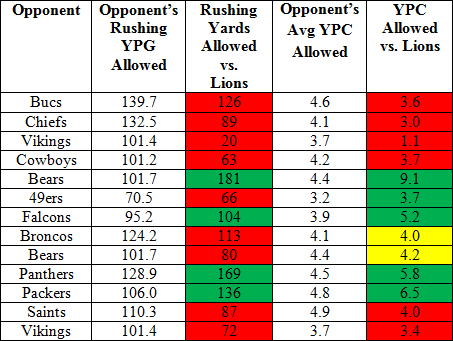 The Lions have struggled to get anything going without the services of Jahvid Best and Kevin Smith. Fortunately, it looks like Smith will be back this week, as he has participated in practice multiple times. Smith's 6.9 yards per carry average is easily the best among Lions running backs. The Lions are actually tied for ninth in terms of yards per carry average (4.4). The reason for their low ranking is their second-lowest amount of rushing attempts in the league (299). In comparison, the Raiders have rushed 395 times this season. 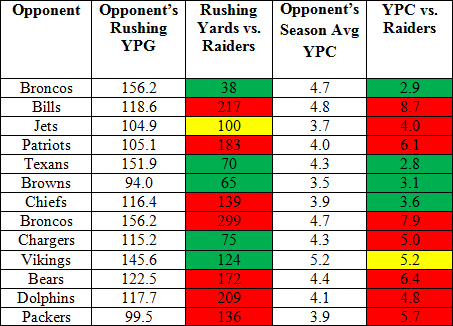 The Raiders have recently struggled in defending the run. Their last six opponents all met or surpassed season YPC averages, with the lowest performance being 4.8 a carry. The Raiders are dead-last in the league in yards per carry allowed (5.2) and have given up a league-worst 21 carries of over 20+ yards.

There is an opportunity for the Lions to exploit this weakness, but since the Lions mostly rely on the pass, they only get a small advantage in this matchup. Lions +0.5. 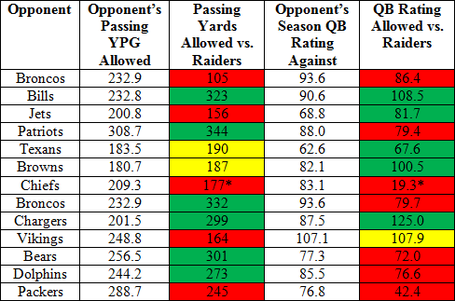 First off, to clarify, Carson Palmer took over in the middle of the Chiefs game and has been the quarterback since. Therefore, I will focus on that part of the chart. Palmer has been incredibly inconsistent this season. Against one of the better pass defenses (Chargers), Palmer tore apart the defense en route to 299 yards, a 125.0 passer rating, and a win. But against a porous Packers secondary, Palmer only managed 245 yards and a putrid 42.4 passer rating. He has thrown one less interception than Matthew Stafford despite only playing in six and a half games. Surprisingly, the Raiders have allowed only 22 sacks on the season (T-fifth). 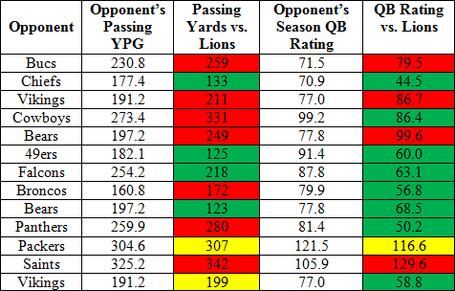 Last week, the Lions depleted secondary stepped up big time, picking up three interceptions against the Vikings. For the ninth time this season, they held their opponent below their passer rating average. Overall, they rank fifth in passer rating allowed (76.1), third in yards per attempt allowed (6.3) and tied for second in interceptions (18).

I think the Lions have the advantage here. Palmer is prone to turnovers and the Lions like to force them. But Palmer also has the ability to put up a huge game. Therefore I give a tentative advantage to the Lions +1.

Another small disclaimer: Darren McFadden has not played since he was injured in the Chiefs game. McFadden is very unlikely to play Sunday, so, again, I will only focus on the part of the chart without him. Since his absence, the Raiders have been a very average running team. They outperformed yardage averages in three of six games and YPC averages in two of six. Michael Bush is a decent backup, but his stats don't come close to matching McFadden's. Bush is only averaging 3.9 a carry and is only averaging 2.9 a carry in his last three games. However, he is a great short-yardage back and has seven rushing touchdowns on the year. 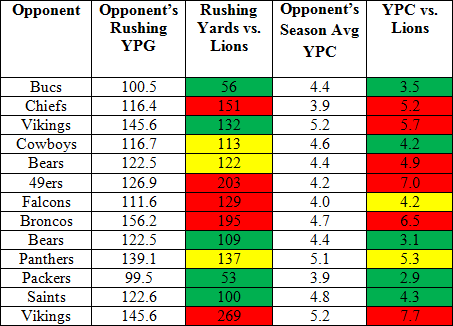 The Lions defense took a pretty big step back last week with Joe Webb and the Vikings running all over them. Fortunately, the Lions don't have to face another extremely mobile quarterback the rest of the season; Palmer is no exception. Still, the Lions run defense is suspect. They have given up the second highest yards per carry (5.1) and have allowed the most rushes of 40+ yards in the league (six). The Lions get Ndamukong Suh back this week, which should help in short-yardage situations, but even with Suh, the Lions have struggled. Although they'll be without their star running back, the Raiders still have the advantage here: Raiders +1.

Advantage: Lions +2. Both teams really need this game to keep their playoffs hopes alive. Both teams have some key injuries. Both teams are trying to prove they've ridden themselves of old demons. But only one team has an explosive passing threat, a ball-hawking secondary and an elite defensive line: The Detroit Lions.

Before I dive into my prediction, let me add a personal note. I will be attending the game this week. For some crazy reason, a few friends and I thought it would be a good idea to get tickets in the Black Hole. If something should happen and this is my last "On Paper" preview, it has been a privilege writing for all of you. You're the greatest fans in the world. (Kidding, Oakland fans. I know you guys are trying to improve your image, and I expect a somewhat-respectable experience in Oakland.)

Anyway, the Lions win their most important game in a decade: Lions 27, Raiders 17.