Breaking Down The Oakland Raiders Defense

Share All sharing options for: Breaking Down The Oakland Raiders Defense

After facing some tough defenses earlier in the year, the Detroit Lions have faced some seemingly easier opponents as of late. In the last month, the Lions have had the good fortune of facing the Vikings and Panthers, ranked 30th and 29th, respectively, in victories. On Sunday, they will face off against an Oakland Raiders defense that is also near the bottom of the league in terms of stats.

The Raiders come into this game with the 28th ranked defense in the NFL, with just over 27 points given up per game, but that doesn't necessarily mean that the Raiders defense is a terrible one. For starters, they do rank near the middle of the league in pass defense at 18th, and they are only allowing opposing quarterbacks to complete 52.4 percent of their throws, which is the second lowest completion percentage allowed by a defense in the NFL. On top of that, they play a scheme that is almost tailored for a passing team like the Lions.

In terms of scheme, the Raiders are basically a 4-3 team, even though they do bring pressure from the linebacking corps and function much like a 3-4 defense. On most downs, especially passing ones, I would expect a five man rush from the Raiders just because the defensive ends on the roster are not quality NFL starters. In fact, the best pass rusher on the team is strongside linebacker Kamerion Wimbley, who has seven sacks on the season. Aside from that, the Raiders also have one of the most underrated defensive tackle combination in the NFL with Tommy Kelly and Richard Seymour. Kelly has seven sacks on the season and Seymour has six, which ranks them tied for first and third on the team in sacks.

I mentioned above that the Raiders defensive ends are basically a work in progress. To prove you my point, consider this: the two starters on the line, Jarvis Moss and Lamarr Houston, account for only three sacks. To me, it looks like this team is simply going through a transitional period where the previous coach and defensive coordinator wanted to run the 3-4, while the current one wishes to run the 4-3. That would be the only real reason to have a guy like Houston, who is 305 pounds and was a defensive tackle in college, playing defensive end right now.

For the Lions, I think the Raiders defense is going to be quite a unique challenge on Sunday. While Jeff Backus and Gosder Cherilus are more than reliable at the offensive tackle spots (especially since the Raiders ends are not that good), the issue with the Lions offensive line has always been the interior. When they have to handle both Kelly and Seymour and then account for blitzers, it could very well lead to an ugly day for Matthew Stafford. If I were the Lions, I would try to get a running game going against this team since they are 29th in the league in rush defense. That is, obviously, easier said than done, but it would slow down the rush quite a bit.

For this week's play breakdown, I am going to show you an example of the pros and cons for a five man blitz. As you can see on the play below, the Lions are in their typical shotgun formation with a slot receiver (we'll say Titus Young) and use Maurice Morris to block the blitzing linebacker. If the play works for the Raiders, they get a fair bit of pressure on Stafford since one of their stud DTs has a one-on-one matchup and the blitzing linebacker is blocked by a running back. On the other hand, it leaves them quite vulnerable on the back end since they have to play cover one. 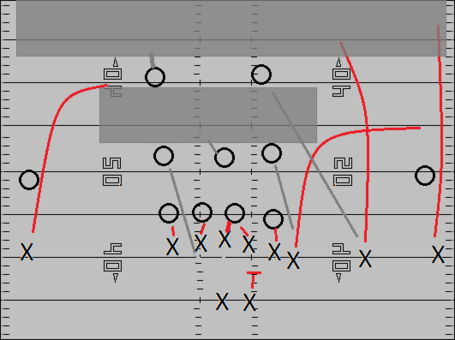 Since the Raiders will pretty much have to play cover one if they bring the blitz, that will either mean that Calvin Johnson isn't double covered or a guy like Nate Burleson (on the left side of the field) will have a far better chance of getting open. Basically, it would be a bad idea for the Raiders to blitz a team like the Lions unless they truly trust their defensive backs to cover all of the options on the field.

Overall, I think the Raiders defense is a decent unit but really doesn't have a ton of pieces yet for the style they play. But realize that the Lions only managed three points in the second half against a Vikings defense that is a far bigger work in progress, so don't rule out a dominating performance by the Raiders. Still, I think the Lions win this game by a score of something like 24-21 or 27-24.