Share All sharing options for: Breaking Down The New Orleans Saints Defense

Last Thursday, the Green Bay Packers defense held the Detroit Lions to their second lowest point total with just 15 points. This week, the Lions offense will be going up against one of the most aggressive defenses in the NFL when they face the New Orleans Saints, which is coached by Gregg Williams. In today’s post, I will quickly break down the Saints defense and why they may pose a risk to the Lions offense.

The Saints defense prior to 2009 was one of the worst units in football. In 2008, they ranked 26th in the league in points scored, which led both general manger Mickey Loomis and head coach Sean Payton to find another defensive coordinator. Payton had always been a big fan of Gregg Williams and his aggressive style of defensive play, and he actually gave up $250,000 from his salary to bring Williams to New Orleans. Since Williams has taken over the Saints defense, things have changed quite a bit.

The Saints defense also isn’t a unit that gets a ton of pressure on the quarterback, even though they do blitz quite a bit. For the season, the Saints have just 22 sacks and just seven sacks from the four starters on the defensive line, three of whom are former first-round picks of the Saints. Getting sacks was also a problem for the Saints last year, when they only managed 33 sacks all season. When you combine their lack of pressure with the fact that the secondary isn’t getting turnovers, I like the Lions chances in this game.

Now, I mentioned earlier that Williams does blitz quite a bit. It is what he is known for around the NFL, and the way he does it is quite creative. Basically, the Saints play like a 3-4 team with zone blitzes and whatnot even though they play a 4-3 front. What it means is that the Saints continually change the number of men rushing the passer. On some downs, it might be six or even seven men that blitz, while on others it might just be three. This is nothing new for 3-4 defenses around the league, but it’s not something most other 4-3 teams do on a regular basis.

One of the unique things about how Williams brings pressure is that he utilizes defensive backs quite a bit in his blitzing. Saints safety Roman Harper is actually the team’s leader in sacks right now with seven, which again is a common theme with Williams and his defenses. Harper was fourth on the team in sacks last year, and Shawn Springs, a cornerback, led the Redskins in sacks back in 2004 when Williams was coaching in Washington.

For this week’s play breakdown (0:13 spot on the video below), I will show you two plays where the Saints defense uses different formations. On the first play, the Texans are giving a run look with the I-formation out there and a tight end on the line. The Saints decide to counter with a six-man defensive line and two linebackers, both of whom seemed to be geared toward stopping the run. When the play begins, the Texans go play-action and find Andre Johnson for a huge gain. On the second still shot, you can see that the Saints struggle to get pressure on Matt Schaub even though they bring more than half the personnel for that purpose. Now, I wouldn’t expect the Saints defense to respect the Lions rushing attack that much, but it shows you how the Saints are different than other 4-3 teams. 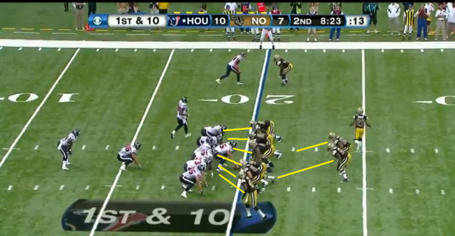 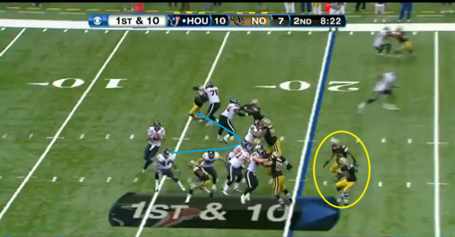 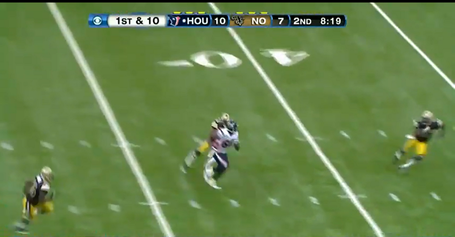 For the second play (starts at 1:18 mark of the video below), the Texans are in a bunch formation on the right side of the field. To account for all the men and still be able to play cover two, the Saints decide to go with just three down linemen. Unfortunately for the Saints, they don’t get any pressure on Schaub, and James Casey, an H-back, runs by his man and beats the safety for a touchdown. For Sunday’s game, I think it’s very likely that the Saints will utilize some type of a three-man front to account for the Lions options like they did against the Texans. 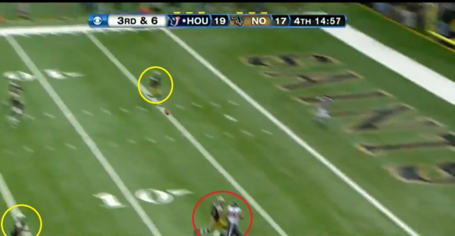 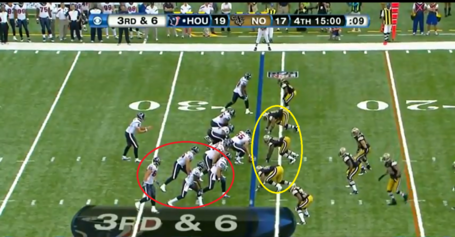 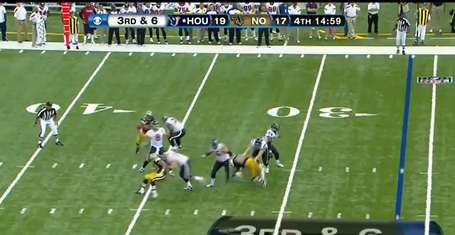 Overall, the Saints defense shouldn’t be the reason if the Lions are not successful offensively on Sunday. The Lions offense, especially Matthew Stafford, has struggled quite a bit in the last few games (minus the Panthers game) and that simply cannot continue if they are to make the playoffs. Overall, I think it is going to be a close game, but I don’t like the Lions chances on the road.