Share All sharing options for: On Paper: Detroit Lions At New Orleans Saints

The schedule makers in the NFL are a cruel, cruel bunch. A week after facing the defending champion Green Bay Packers on national television, the Lions are headed to the Big Easy to battle a New Orleans Saints team that just destroyed the New York Giants. Once again, the Lions will be on display for the entire nation, but not the Detroit Lions that we know. The Lions defense has been depleted by injuries and suspensions, and possibly at the least convenient time. Not surprisingly, Vegas is not optimistic about the Lions' chances this week. The Saints are around a nine-point favorite and almost all the pundits are predicting a Saints win. Will the charts provide any glimmer of hope? Only one way to find out ... 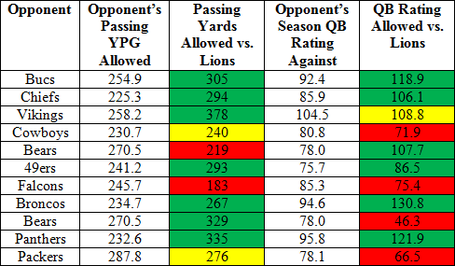 And so the trend continues: As goes Matthew Stafford, so goes the Lions. In the Lions' four losses, Stafford has passer ratings of 86.5, 75.4, 46.3 and 66.5. In their seven wins, Stafford is averaging a rating of 109.4. This week, Stafford will be playing without his infamous gloves for the first time since the bye week. How are his chances against the Saints pass defense? Take a look: 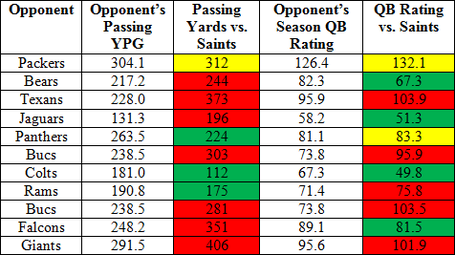 Though they rank 27th in yardage allowed, the Saints look pretty average here. Five of 11 opponents have surpassed their passer rating average, while two met their average and four failed to meet their average. The Saints are much more prone to giving up more yardage than teams are averaging, hence their low pass defense rating. In terms of passer rating allowed, the Saints rank 23rd, giving up an average of 86.7.

The Lions should have a fairly good day through the air. The Saints have a hard time disrupting opposing offenses. They only have 22 sacks on the season (T-20th) and six interceptions (T-28th). They will likely send extra pressure to force Stafford into a mistake, but I'd be very surprised to see Stafford with another sub-80 passer rating this week. Lions +2. 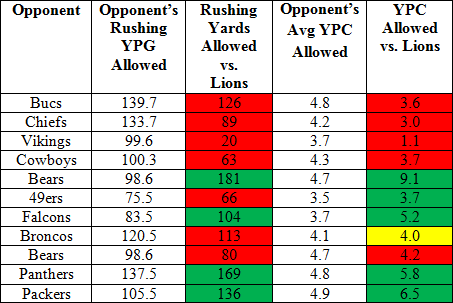 Another interesting trend continues. The Lions run offense appears to be improving without the services of Jahvid Best. The Lions have continued to quietly improve on ground, and, although it hasn't resulted in as many wins, it is making the Lions a more balanced team. The Lions offense was very successful against the Packers, but failed to seal the deal when entering Packers' territory. The Lions now actually rank tied for eighth (!) in yards per carry at 4.5 yard a rush. 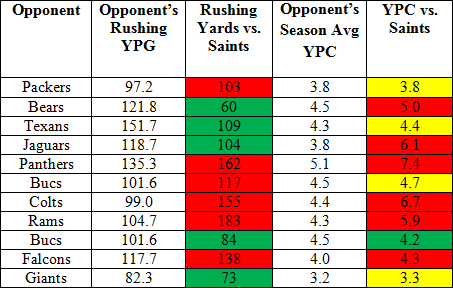 There's another opportunity here for the Lions. The Saints have only held one opponent well below their yards per carry average. In fact, they have only held two opponents below four yards per carry, and those teams are averaging 3.8 and 3.2 a carry on the season, respectively. The Saints have given up 11 rushing plays of 20+ yards (T-6th most) and four of 40+ yards (T-3rd most).

We aren't sure who we will see in Detroit's backfield on Sunday night. Kevin Smith has been hanging around practice the last couple days this week but has not been participating fully. I have a hunch he will play, but, if not, expect a full dose of Maurice Morris with a little Aaron Brown sprinkled in. Regardless of who gets the majority of carries, the Lions should have a small advantage here. They will need it, too, in order to keep the Saints honest. Lions +1. 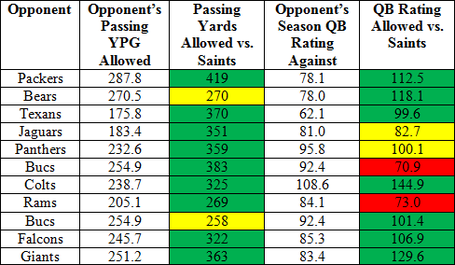 Ugh. Look familiar, Lions fans? After facing, in my opinion, the best passing offense in the league last week, the Lions now go up against the Saints, who are a very close second-best. The Saints have met or surpassed opponents yardage averages in every single game this season. Only two opponents have held Drew Brees under their passer rating average. Brees has surpassed 350 yards passing six times this season and is on pace to break a ton of records. The Saints are averaging a passer rating of 103.7 (3rd), have only allowed 19 sacks (T-5th) and are averaging 8.0 yards per pass (T-6th). 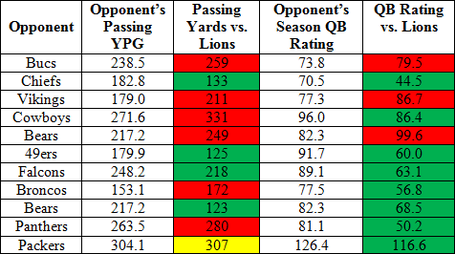 The Lions counter with a strong pass defense. An opposing quarterback has not reached their season passer rating average since the Monday Night game against the Bears. However, the Lions are coming into the Saints game ravaged by injuries. Chris Houston and Louis Delmas have not practiced this week and have to be considered doubtful at best. Backup Brandon McDonald has also struggled to practice this week and will be limited at best on Sunday. Therefore, it will be up to Aaron Berry, Eric Wright and Alphonso Smith to slow the Saints' dynamic passing attack. Given how the defense performed in the second half against the Packers, I am not optimistic ... at all. Saints +3. 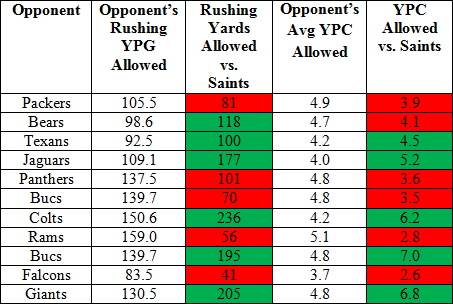 Despite their high ranking, the Saints running attack is pretty average. They surpassed averages in yardage in six of 11 games and yards per carry averages in five of 11. Their most impressive games (Colts and Giants) were against the 31st and 24th ranked defenses, respectively. They also faced the worst run defense in the league against the Rams and failed to run for three yards a carry (in a game they lost against a backup quarterback). In other good news, the Saints are particularly dangerous in breaking a long run. Though they rank 10th in rushes of 20+ yards (10), they have yet to have a rush of 40+ yards. They are, however, very secure with the football. They have only lost two fumbles on the season. Only the Patriots have done better. 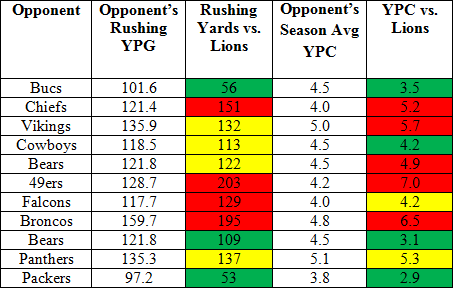 The Lions appear to be improving as a run defense but still struggle with stopping the long run. They still have allowed the fourth most rushes of 20+ yards and second most rushes of 40+ yards. This week, they will likely be without Ndamukong Suh, but the Lions' depth at defensive tackle is great.

The Lions have an opportunity to win this matchup, but I think rookie running back Mark Ingram is just starting to turn things on. In the past three games, he has averaged 5.2 a carry. And, of course, don't sleep on Darren Sproles. Saints +0.5.

Surprisingly, the Saints come out with a mere +0.5 advantage. The Lions have a chance to hang with the Saints, but they have to be more effective in cashing in drives for points. The Lions had over 200 yards of offense in the first half against the Packers but failed to put up a single point. The Lions should have no problem moving the ball like they did last week, but if they continue to turn it over or get field goals instead of touchdowns, they will fall behind quickly.

Unfortunately, all of the intangibles are on New Orleans' side. The Saints have been nearly unstoppable in the Superdome, and the crowd will be amped in the face of a national audience. The Lions will be without at least three defensive starters when they'll need them the most. I expect this game to go a lot like last week (for both teams). The Lions hung around and stayed competitive early, but the Packers pulled away in the second half. Similarly, the Giants played competitive early, but in the end, the Saints were too much. Saints 34, Lions 20.