Share All sharing options for: Breaking Down The San Diego Chargers Offense

If it hasn't been hammered enough by the media and blogs alike already, the Detroit Lions stand one win away from a playoff berth. Unfortunately for them, they happen to face one of the hottest teams in the NFL right now in the San Diego Chargers on Christmas Eve. Exactly how hot are they? Well, for starters they have won three straight. But they haven't only won three straight games, they have dominated the three opponents, averaging over 36 points a game over that span.

Much like the Lions, the Chargers are very much reliant on their quarterback, Philip Rivers. Pretty much, how he goes, so does the Chargers offense. It should, then, come as no surprise that both Rivers and the Chargers were dipping and are peaking at the same times. Before their current three-game winning streak, the Chargers had dropped six straight games and were basically left for dead in the AFC West. Over that span, Rivers had a pretty mediocre passer rating of 75.0, while his team was only putting up 21.5 points per contest. On the flip side of things, Rivers has an astounding average quarterback rating of 132.2 during their current winning streak.

The Chargers are similar to the Lions in terms of scheme also. The Lions under Scott Linehan run a hybrid offensive scheme that mixes in the Air Coryell type of offense and the West Coast offense, while the Chargers are purely an Air Coryell team under head coach Norv Turner. An Air Coryell offense in layman's terms is basically a vertical passing attack combined with power running. Turner, who has been around the NFL for quite a long time now, actually runs one of the purest forms of the Air Coryell today, as it dates back to his days with the Dallas Cowboys in the early 90s when the team won two Super Bowls with Troy Aikman. The only other team that I know of still running a pure Air Coryell offense would be the Chicago Bears under Mike Martz.

In the Air Coryell/Norv Tuner’s offense, plays and play calling are both simple and complicated at the same time. It’s simple in the manner that there is little to no trickery like the West Coast offense. You’re not trying to get your receiver open quickly and let him get yardage after the catch; you’re simply running them deep and using the receiver’s and quarterback’s talent to make big plays. This means that the offensive line play is critical to the success or failure of this offense. When you look at the sack numbers from their six-game losing streak and three-game winning streak, you see that the Chargers have allowed only two sacks in the last three games while they gave up 12 in the six games prior.

It’s complicated in the manner that Norv Turner’s offense basically relies on providing the quarterback with multiple deep passing options on the same play and letting the quarterback make the decision. This, again, means that the offensive line play is critical to the offense’s overall success since they will most likely just keep five or six men in to block. When the offensive line is blocking and the whole offense is clicking, there is really no better scheme out there, in my opinion, since an offense like this can score and score in a hurry, especially if there are talents like the Chargers have on offense.

When you have receivers like the 6-foot-5 Vincent Jackson and Malcolm Floyd, in addition to the 6-foot-4 Antonio Gates (who is a hometown product), you can imagine why it is prevalent that the Lions defensive line has a great game against a suspect Chargers offensive line. Not only do these two men -- Jackson and Floyd -- have about a good half-foot on the Lions cornerbacks, both of them are reliable pass catchers and can flat out fly. For Chris Houston and Eric Wright (and maybe Alphonso Smith if Houston isn’t available), this could be their toughest matchup yet, and they have faced the Packers and Saints receiving corps this season.

To give you guys a better idea of what Norv Turner’s offense really does, let me show a quick example of an Air Coryell play. In the play below, there are three receivers, a tight end, and a running back. The quarterback is in the shotgun and all eligible receivers are sent out on routes, leaving only five men to block. The idea for the offense is simple: they expect their receivers to be able to beat the corners/linebackers, so the deep ball is an option for whomever the safeties do not double cover or pick up. You can see that two receivers run patterns into one of the safety’s zone, which would make him choose who to respect more or who to double cover. Whoever the safety doesn’t choose is the open man. If he sits back and just waits for the quarterback to throw the ball before reacting, then he runs the risk of getting too far away from one receiver. 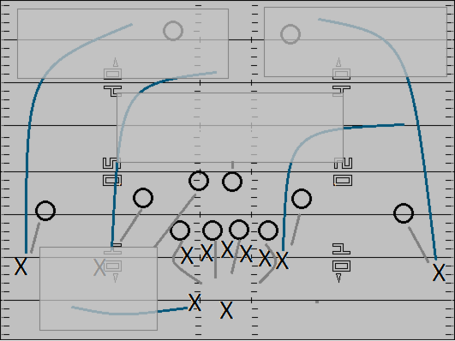 On the other side of the field, you have a similar situation. You have a tight end -- Antonio Gates of the Chargers -- in the middle zone while a receiver is running deep. If a safety doesn’t come down and double team the 6-foot-4 Gates, then you have him one-on-one with a linebacker. If the safety does double cover him, then you have a 6-foot-5 receiver in a man-to-man situation against a corner. If all else fails on the play, the quarterback can simply check down in the flat to his back, who will basically need to beat one linebacker and maybe a defensive end to pick up a first down and maybe more.

Clearly, this play, on paper, sounds impossible to stop when you consider the size the Chargers are about to put out on the football field on Saturday. This is why it’s more than critical that the defensive line -- again -- gets pressure on Philip Rivers. Of the five routes in the play above, none of them are quick-developing ones. All of them will take time, which if not given, will result in nothing, if not a negative play for the Chargers. Considering that Rivers isn’t the most mobile of quarterbacks out there, I think the Lions will have a great shot at winning this game if they can simply apply pressure on him and play with a lead, where the running game won’t be a factor.