It took me a while to decide what I should review this week. Should I go with the Lions' short-yardage troubles? Should I highlight two noticeable misreads by Matthew Stafford that worked out anyway (the Nate Burleson touchdown and a 24-yard pass to Calvin Johnson)? Should I break down how poorly the beaten-up secondary is playing? Then I realized, why in the world would I focus on something negative when the game ended with such an unreal performance by Stafford and Calvin Johnson? There were three key plays on the final drive involving these two, and they made it look incredibly easy.

This week, SandmanLion came through with the "slowlights" and all three plays analyzed can be viewed back-to-back-to-back (with epic music) at the 11:25 mark below.

The first play came on first-and-10 from the Lions' 18-yard line. The play was a corner-route to Johnson and it went for 21 yards. Here's the basic outlook of the play: 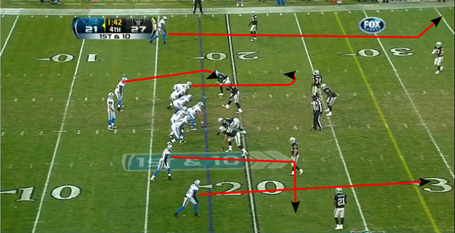 The Lions are going up against a zone defense, and Johnson's route is going right into the weakness of the zone. Check out this diagram of the play. 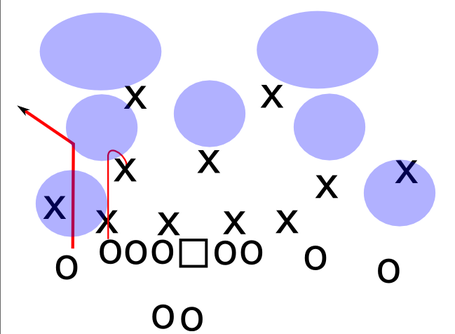 The outside corners are playing a shallow zone, while all the other coverage men drop deep to prevent the big play. Johnson's corner route, however, exploits the hole between the zones of the deep safety and the inside corner on the left side. Meanwhile, Brandon Pettigrew's curl route draws the outside corner to him, preventing any chance of the defender getting a hand on the ball.

This is a perfect play call against this defense, but it almost doesn't work because of one Richard Seymour, who had a phenomenal game on Sunday. 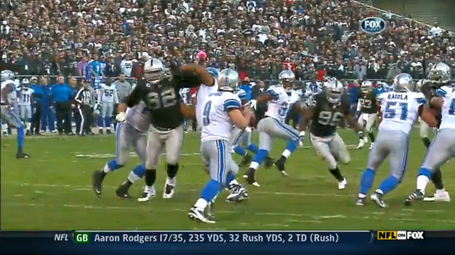 This is a great angle, because it gives us an opportunity to see what Stafford is able to see on this play. Seymour has slipped in between Jeff Backus and Rob Sims and is in Stafford's face early. This forces Stafford to throw the ball to a spot before Calvin makes his break. This is dangerous for a couple reasons. If the safety is watching Stafford, he has a chance to break for the ball before Johnson does. Also, with Stafford's limited vision, he won't know for sure where Calvin is headed. 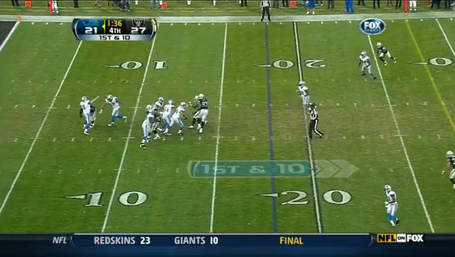 Here's where Seymour makes a mistake and Stafford shows his brilliance. Seymour decides to go low and lay the big hit on Stafford. Seymour could have just-as-easily jumped in the air and batted this ball down, ending the threat. Stafford, however, is forced to throw off his back-foot, fading away, to a small target 30 yards away. The degree of difficulty on this play is somewhere closes to a ten out of ten. 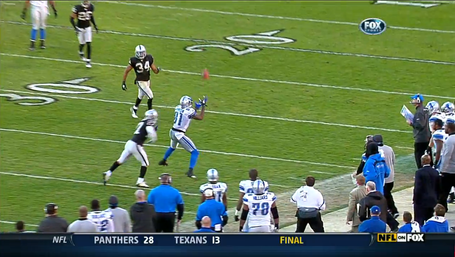 And Stafford nails it. First down. Out of bounds. The Lions are in business.

The next play was the most essential for the Lions to drive down the field: a bomb to Megatron for 48 yards. Here's how it worked: 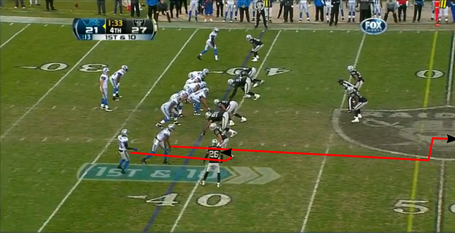 Most of the routes are irrelevant here, as this is just another great execution by Stafford and Johnson. Johnson fakes an in-route about 15 yards down field, then runs a fly. At the point of his initial break (faking the in-route) Stafford pump-fakes, then goes deep. 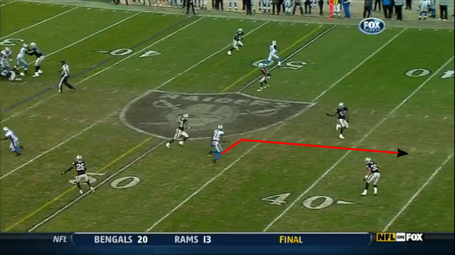 This is where Calvin makes his cut and Stafford pumps. The fake affects all three defenders who are blanketing Calvin. The linebacker underneath slows and prepares to knock down the pass. The linebacker at the 41-yard line also slows down, preparing to tackle Johnson if he manages to catch the ball. And the deep safety, as you can see, is completely flat-footed and in a bad position to turn and run with the speedy Calvin. 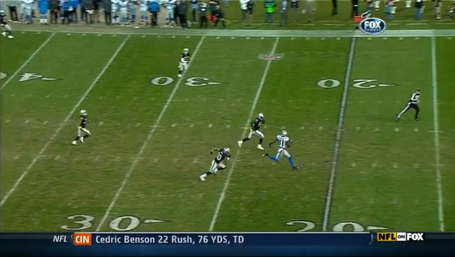 That is the smell of burned Raider. The pass is underthrown because Stafford is, once again, under heavy duress. But Calvin has beaten his men so thoroughly that the defenders are unable to turn and look for the ball, as they are drastically trying to catch up with Megatron. Calvin, as he can do so impressively, sees the ball and adjusts accordingly for an "easy" catch.

The final play is, of course, the game-winning touchdown. Stafford and Johnson made this challenging play look absolutely routine. 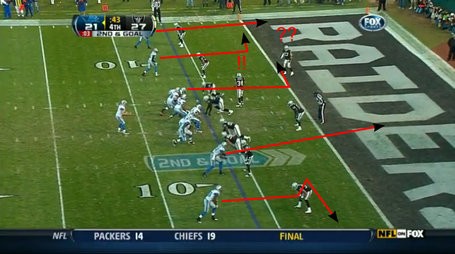 The first thing I noticed upon reviewing this play is that the Raiders defenders are not set upon the snap. As you can see, the ball has already been snapped and the Raiders corner lined up across from Pettigrew is saying something to the safety and his eyes are not even on his receiver. The Raiders appear to be in a man formation, but the linebacker at the one-yard line and the confused safety, I believe, are playing a short and deep zone respectively. 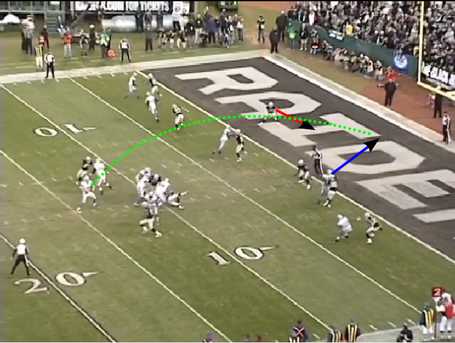 This is where Stafford's brilliance kicks in. Johnson has beaten his man to the inside; now it is up to Stafford. He must put enough loft on the ball to sail it over the linebacker in a short zone, but he must also put enough zip on it for the ball to get there before the safety comes in from the left. And here's the kicker, he does so while off his back foot again. 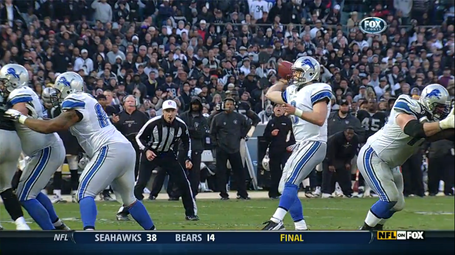 I've been a critic of Stafford's footwork in the past and this is no exception. Stafford clearly has room to step into this throw, but instead, elects to fade away as he's throwing. Granted, Stafford had been under pressure this entire drive and might have been feeling defenders that weren't there, but if he wants to make life easier for himself, he should step into these throws. However, this is just another testament as to how talented Stafford is. A fade-away throw that needs to be perfectly placed over a defender's head with enough speed to beat an oncoming defender is no easy task, and Stafford lays it in perfectly. Touchdown. Win #9.