Share All sharing options for: Breaking Down The San Diego Chargers Defense

The San Diego Chargers came into this year in somewhat of a transition on defense after losing many key pieces in the last few offseasons. Gone is three-year defensive coordinator Ron Rivera, who took the Carolina Panthers head coaching job. Also gone are key players such as three-time All-Pros Shawne Merriman and Jamal Williams, and solid role players like Igor Olshansky and Antonio Cromartie. With losses like that, I guess it should come as no surprise that this defensive unit ranks in the bottom half of the NFL right now.

The Chargers come into this game ranked 20th in the NFL, which is actually three spots higher than the Detroit Lions (and here I thought we hired a defensive coach). They have allowed about 22.4 points a game, but that obviously does not tell the complete story. The fact is that this Chargers defense really has not been challenged all that often this season. Aside from meetings with the Packers, Patriots and Jets (who rank seventh in the NFL), the Chargers defense has not faced another offense ranked in the top ten currently. On the flip side of things, they have had the luxury of facing plenty of low-scoring teams such as the Chiefs, Jaguars, Vikings and the Dolphins, which really does make it look like their defense is far worse than it seems on paper.

I guess we should keep those numbers in mind when we consider the fact that the Chargers are one of the best pass defenses in football right now, allowing just a couple of yards over 200 per contest, which ranks them sixth in the NFL. Also, the Chargers defense has allowed 24 passing touchdowns this season and only has 29.0 sacks thus far, both of which point to the fact that the Chargers defense may not be as good as advertised, which isn't very good to begin with.

With that said, I think we should also keep in mind that the Chargers have a couple of fantastic players on defense, such as outside linebacker Shaun Phillips, cornerback Quentin Jammer and safety Eric Weddle, who is having a Pro Bowl-caliber year. Aside from them, however, there just seems to be a lot JAGs (Just A Guy) in the starting 11, especially on the defensive line. On the line, they are starting rookie Corey Liuget, veteran backup Antonio Garay and former CIS (Canadian version of the NCAA) product Vaughn Martin. None of them seem to be anything special or anyone that requires a double team to be honest, which shouldn't bode well for a 3-4 defense that is built on defensive linemen requiring double teams.

Scheme-wise, the Chargers are pretty similar to other 3-4 teams. They rely on their lineman to eat up blocks so that their linebackers have free pass rushing lanes or one-on-one matchups with linemen or blocking backs. So, it shouldn't really be a surprise that the Chargers have gone from being one of the league's most sack-heavy teams last year -- when they were third in the NFL -- to near the bottom of the league this year when you consider that they don't really have defensive linemen that command consistent double teams. Besides, the Chargers really haven't been able to replace Merriman properly, either. His replacement in the starting lineup right now is some dude named Travis LaBoy, and no, he's not an injury replacement either. He has started all 14 games thus far and accounted for just one sack.

With all of that said, I will wrap up today's post with a quick example of why it is important for 3-4 defenses to get double teams up front. In the play below, the offense has spread out the field with three wideouts and a tight end, and the quarterback is in the shotgun. This is obviously something the Lions do quite often. The key is in the blocking changes. With this many receivers on the field, the Chargers would either have to play nickel to account for the extra receiver or bring a safety down. I would imagine bringing a nickel back in would make more sense for a formation like this. When the play starts, the Chargers are basically stuck with three defensive linemen and three linebackers. One of them needs to account for the middle of the field (or could come on a blitz if need be), another would be used to cover the tight end, while the last remaining one would blitz. 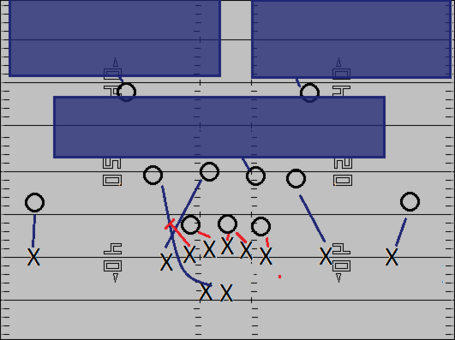 For the blitzing linebacker, this play would work out great if the right defensive end draws a double team since he would be left one-on-one with a running back. If he doesn’t, however, then the OLB has to go up against a much stronger and bigger left tackle, which more or less should neutralize a guy like Shaun Phillips. If this is how things work out on Sunday, I think the Lions offensive line should provide plenty of time to Matthew Stafford, kind of like last week. If that happens, I would expect a solid, if not great, showing from the Lions offense at home in a critical game.