Share All sharing options for: On Paper: Detroit Lions Vs. San Diego Chargers

Here we are. One win away from the postseason for the first time in over a decade. Many of you predicted we would be here, others thought the schedule was too tough or that we're still a year or two away. Regardless of what we predicted, this is the reality: the Lions are 9-5 and have a very good opportunity to be playing into January.

On Christmas Eve, the Lions face a team that is in desperate need of a win to have a shot at the playoffs. After a mid-season six-game losing-streak, playoffs were the last thing on Chargers fans' minds, but after an extremely impressive three-game winning-streak, San Diego's postseason hopes are alive, though hanging by a thread. Vegas has the Lions favored by around one point. The charts, too, predict an extremely close matchup, but do they agree with the favorite? Keep reading to find out. 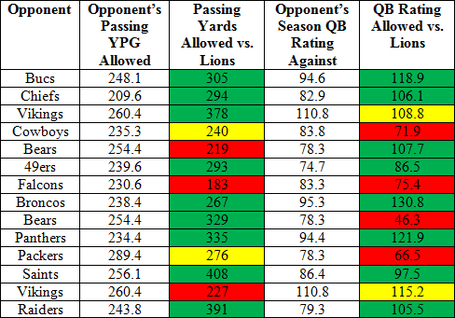 Matthew Stafford continued his hot streak last week, putting up a higher passer rating against the Raiders than any other quarterback this year. Stafford now has a passer rating of 95 or higher in five of the last seven games. The Lions have remained fairly healthy on the offensive side of the ball (outside of running back) and this week will be no exception. We pretty much know the identity of the Lions pass offense: they've got the potential to be explosive but can also suffer from some dry spells during the game. 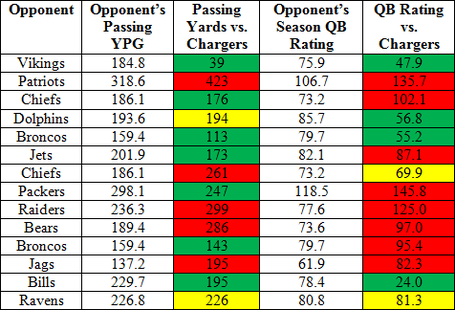 Despite their high ranking, the Chargers aren't really that great of a pass defense. They've only held seven of 14 opponents under yardage averages and only four of 14 below their passer rating averages. The reasoning behind their high ranking is that they haven't played a lot of elite pass offenses. They only rank 23rd in terms of passer rating allowed, 21st in yards per attempt allowed and 22nd in sacks. In reality, the Chargers, at best, have an average pass defense.

I see no reason for the Lions pass offense not to have a typical performance. The Chargers do have a couple solid corners, but their lack of pass rush and Detroit's current hot streak makes me believe Stafford won't have many problems on Saturday. Lions +2. 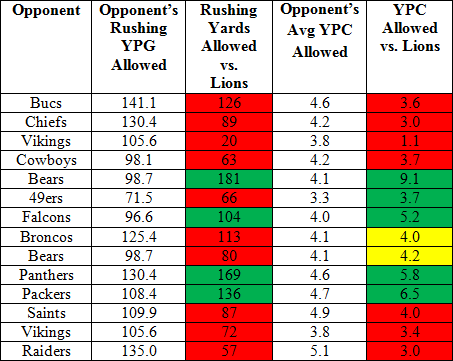 After seeing some mild success in the middle of the season, the Lions haven't been able to get anything going on the ground in the past few weeks, despite going up against mediocre defenses. They are still running at a respectable 4.3 a carry rate (T-12th), but that number is way down in the past three weeks. With a gimpy Kevin Smith as the number one back, the Lions are struggling to establish any sort of run game. 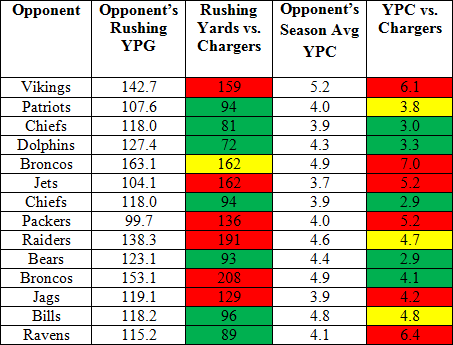 It's pretty hard to get a grasp on the Chargers run defense. They've held seven opponents under their yardage averages and four under their YPC average (with three opponents meeting averages). The Chargers rank T-20th in YPC allowed (4.4) and have allowed the seventh most rushes of 20+ yards. I think it's safe to call the Chargers run defense average or slightly below, but because the Lions are struggling recently, neither team has an advantage here. Draw. 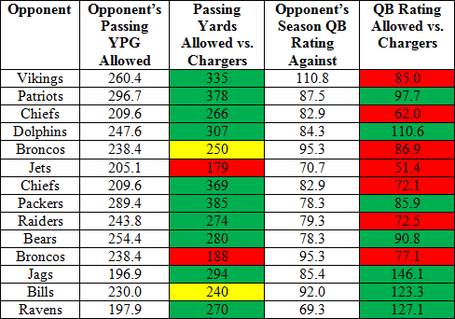 After a sketchy start to the season, Philip Rivers is on a roll. Rivers has put up a passer rating of over 120 in each of the past three weeks, including games against the solid defenses of the Jaguars and Ravens. The Chargers had been struggling with pass protection, but with a steady offensive line now, they have only allowed two sacks in three games (both against the Bills). Overall, the Chargers are 11th in passer rating, seventh in yards per attempt, T-11th in sacks allowed, and eighth in passing touchdowns. They haven't been an elite passing attack all season, but lately they have been playing like it. 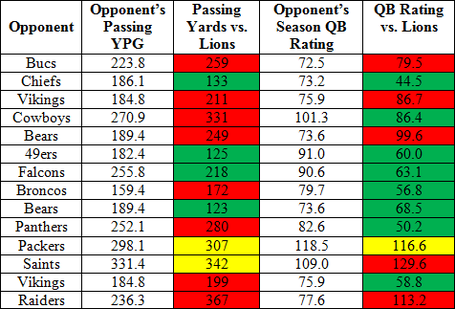 In contrast, the Lions pass defense has been struggling as of late. They have failed to hold their past five opponents under their yardage average and have allowed passer ratings of above 110 in three of four games. Many of these struggles seem to be due to injuries. The Lions have been without starting corners and safeties in the past couple weeks. Unfortunately, it doesn't seem like the Lions will be at full health against the Chargers. Safety Louis Delmas failed to practice this week and won't likely play. Backup Chris Harris suffered a concussion last week but has been cleared to play and will likely take Delmas' spot. At cornerback, Chris Houston had to leave the game in Oakland due to a knee injury and Aaron Berry has been sidelined for a couple weeks with a shoulder issue. Both have been limited in practice and may be able to play this week, but Brandon McDonald was re-signed this week as insurance.

As almost everyone is saying, the key for the Lions is to get pressure on Rivers. The Lions are a little banged up on the defensive line, with Corey Williams missing practice all week, but most people are overlooking the fact that Lawrence Jackson will likely be back, giving Kyle Vanden Bosch and Cliff Avril some much-needed rest. However, the Chargers have been able to keep Rivers upright as of late, and I think they may be able to do so again on Saturday. Chargers +2. 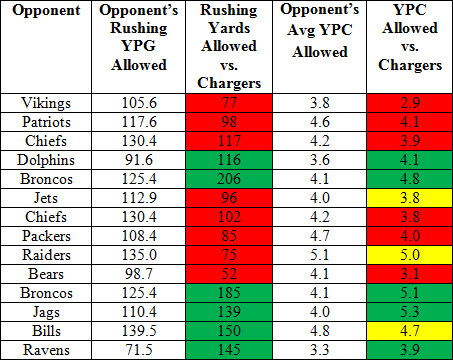 Again, the Chargers have been killing it as of late. They've surpassed 130 yards in the past four games, all of which exceeded the opponent's averages. They even had an excellent day against one of the best run defenses in the league last week playing the Ravens. The Chargers are only 16th when it comes to YPC (4.2), have just 11 rushes of 20+ yards (T-12), and no rushes of over 40 yards. Though they have been hot as of late, the Chargers have only an average running attack. 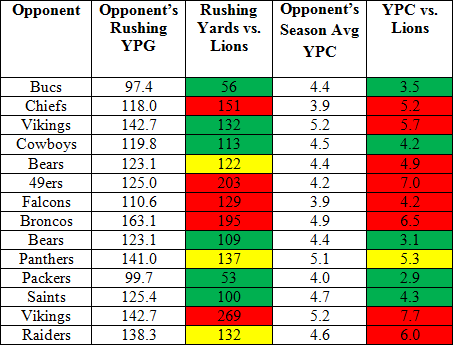 The Lions had a tough time stopping the Raiders last week, as they averaged 6.0 a carry. Overall, the Lions have been slightly below average. Six opponents failed to reach their yardage averages, three met their averages and five surpassed their averages. Overall, that sounds like a pretty average run defense, but they have allowed eight of 14 opponents to surpass YPC averages, and, in fact, they have the poorest YPC allowed average in the league (5.2). Interestingly, though, 12 of the 14 opponents the Lions have faced are in the top half of the league in terms of rushing offense.

The Lions are playing pretty inconsistently when it comes to defending the run. The Chargers aren't a huge threat on the ground, but lately they have been as good as anyone. If Corey Williams can't go, the Lions will take an even bigger hit in this matchup. Chargers +1.

I hate to do this in such an important week, but, in the end, the advantage is Chargers +1. Plenty of factors can turn this thing around. First and foremost, homefield advantage. If twitter is any indication, Ford Field will be even more electric than it was for Monday Night Football. It would also be huge for the Lions if Williams, Houston and Delmas are at full health for the game. It's unlikely that Delmas will be, but if the other two can go, the Lions will have a chance to slow Rivers.

And that will be the key: Which team can slow the other's passing attack? The Lions have the better pass rush to force mistakes, but the Chargers have the better running game to keep the defense honest. This should be an extremely entertaining game with much riding on it for both teams. Unfortunately, the charts give the slight advantage to the Chargers, so I must try and stay objective. Chargers 30, Lions 27.

Lions fans, do your part and make that homefield advantage a +1.5 and prove me wrong.