Today, I'm going to take a different angle to this article. Instead of breaking down the X's and O's of specific plays, looking at how a play developed, I'm just going to let you sit back and marvel at how amazing Matthew Stafford was on Saturday. His accuracy was off the charts, his decision making was brilliant and he likely had his best game of his career when a playoff berth was on the line. He may not be a Pro-Bowler, but I'd be hard-pressed to find an NFC team who would take a quarterback not named Rodgers, Brady or Brees over Stafford.

Again, "Slowlights" have been provided by SandmanLions for you to follow along:

Let's jump straight into the first touchdown of the game (at the 1:08 mark in the video). It was a third down and settling for a field goal would have set a completely different tone to the game. But Stafford, in the face of pressure, laid a beautiful ball into Brandon Pettigrew's hands: 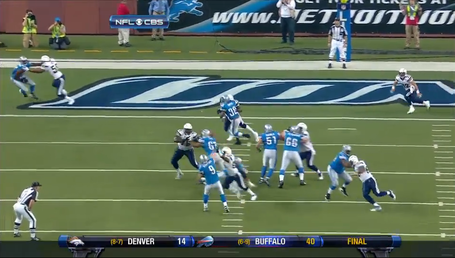 First thing to notice is Stafford under duress. He must release this ball while fading backwards. This makes the throw very difficult. Secondly, you can see that the window for this throw is very small. Pettigrew does not have much separation at the time the ball is thrown. Stafford must aim the ball low and away in a place where only Brandon has a chance at it. This window is incredibly small, but Stafford nails it: 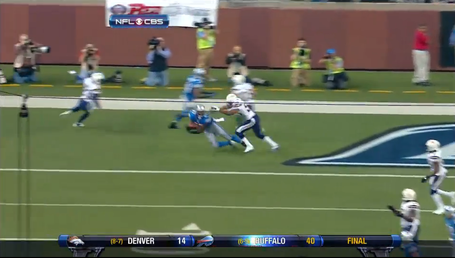 Credit to Pettigrew for making the catch with a defender all over him, but that ball couldn't have been placed in a better spot.

Stafford wasn't anywhere close to done on the day. He also has this receiver named Megatron or something, and he hit Calvin Johnson on three gorgeous plays (apologies, these are not done in chronological order).

The first came on a needle-threading pass from Stafford (8:14 mark of the "slowlights"): 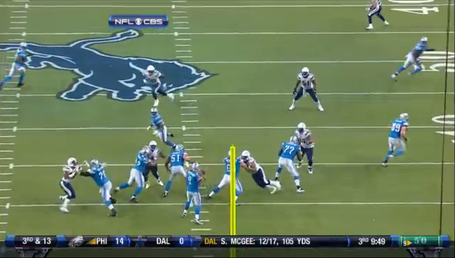 At the point of release, we see that Calvin is making his cut over the middle of the field. Stafford has to split two defenders here with a good amount of heat needed in order to avoid a pass break-up. He also needs the accuracy and chemistry with Calvin to throw it to the spot where he will be. Again, he does this all perfectly: 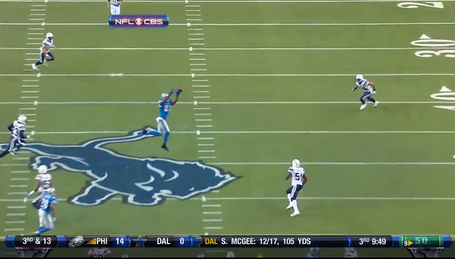 Of course, it helps when you have a receiver with such a wide range of reach, but, again, this ball is exactly where it needs to be. It hits Calvin in stride, has enough height where it has no chance of being batted down, and doesn't require much from Calvin to go up and get it. And that spiral ... man, don't even get me started on how beautiful that spiral is.

The next play (1:40 in the "slowlights") was very similar to this. This time, however, Calvin makes a cut to the outside, and Stafford must, again, throw to the spot where he will be. 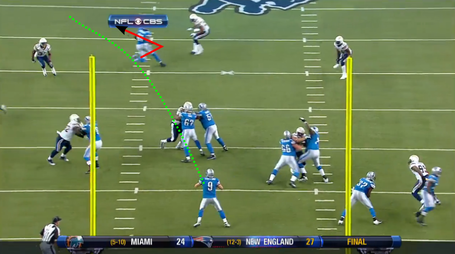 Stafford needs to be able to loft this ball over the defender's head. But there is also a safety over the top (not shown in this screenshot) who is reading his eyes. Again, he'll need a fair amount of speed for the ball to get there before the safety. You know what happens next: 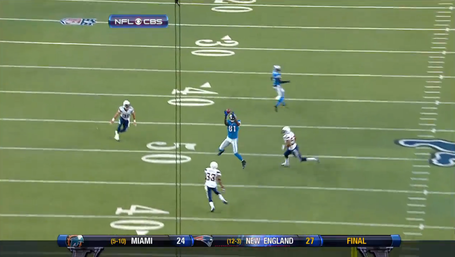 Another beautiful pass, with an incredibly tight spiral, perfectly laid in between three defenders. This was likely Stafford's best pass of the afternoon and just a great example of what the kid can do with time and weapons. 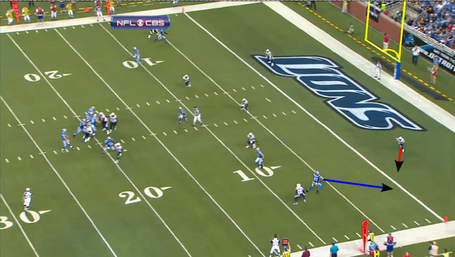 Again, a needle must be threaded. The ball needs to be over the first defender's head, but must be thrown with enough velocity and accuracy to get there before the oncoming safety. Not only is this ball perfectly placed, but it has some crazy speed behind it. If you look closely enough, you can actually see flames coming from the ball. Don't believe me? I captured a screenshot (you have to look very closely to see it) 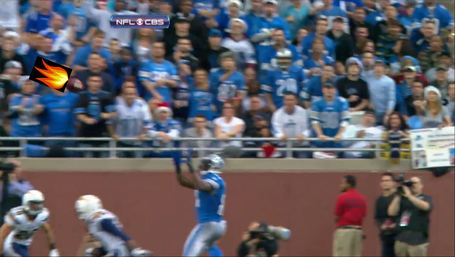 No, that wasn't Photoshopped. I don't even have Photoshop, so your crazy accusation has absolutely no merit.

I know a lot of you are up in arms about Stafford not being named to the Pro Bowl (and rightfully so), but for me, the comfort in knowing this guy will be in Detroit for the foreseeable future is enough to make me happy. I don't care if he's not playing in Honolulu as long as he's playing in Honolulu Blue (you can use that, Jim Schwartz, if you'd like).