Share All sharing options for: On Paper: Detroit Lions At Green Bay Packers

It's the final game of the regular season, but the Detroit Lions find themselves in a completely unfamiliar spot. Instead of having little motivation to win because they are already out of the playoff race, they have little motivation to win because they already have the playoffs wrapped up. Now I know the difference between a win and a loss could mean facing New Orleans versus facing Dallas, but if the Lions are going to make a playoff run, they're going to have to go against good teams eventually. No matter what happens, the game being played next week will be more important than the game this week.

The Lions are getting healthier but will have to face some tough decisions. Should they give some players an extra week of rest, or fight for that five seed. The Packers, on the other hand, have nothing to play for. They already have the one seed wrapped up and will likely rest a good amount of starters at some point in the game. I figure most starters will get some playing time, just to stay fresh (especially considering they will have next week off), but I don't expect to see much of Aaron Rodgers and the gang past the first half. Vegas appears to have the same sentiment, as the Lions actually enter Lambeau as a 3.5-point favorite. Here's where the teams stand statistically: 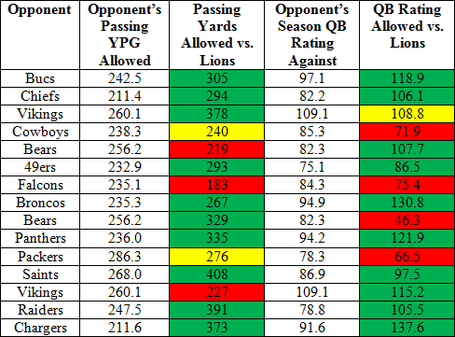 Matthew Stafford has been electric lately, putting up passer ratings of above 95 in the past four weeks. His play has bumped the Lions into the top five in both passing yards and passer rating. It is becoming obvious that the Lions have an elite passing attack. 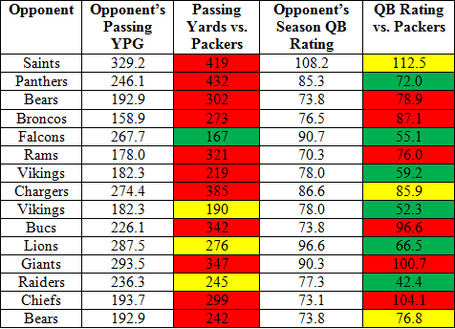 A lot has been made of the Packers' struggling pass defense and this chart seems to corroborate that theory. But looking at the passer rating allowed tells a somewhat different story. They have held nine of 15 opponents at or below their average passer rating. In fact, if you go by passer rating allowed, the Packers actually have the eighth-ranked passing defense. The Packers are very opportunistic on defense, having caused 29 interceptions (eight more than any other team). But most teams have been able to move the ball more than effectively against the Packers. Despite the fact that Stafford was intercepted three times in the previous matchup, the Lions have a clear advantage here. Lions +2.5. 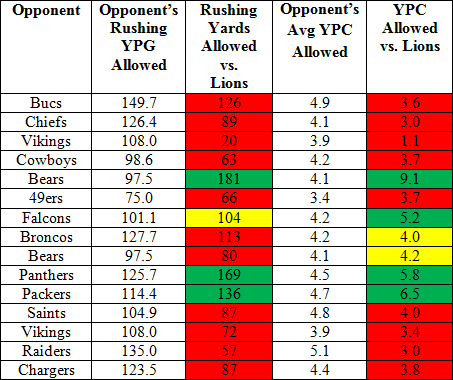 The Lions running game has been very limited in the past few weeks. This is partially due to a small amount of carries by the Lions, but if you look at their YPC average, it hasn't been good regardless. Now, the Lions offense can be very effective without a running game. They effectively use wide-receiver screens and short passes to tight ends to serve the same purpose as a running game. However, it's always more risky to throw the ball, especially late in the game when the Lions are trying to run clock. 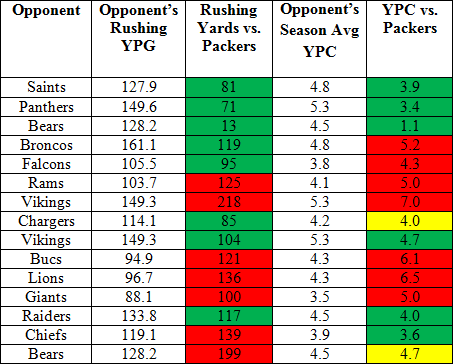 The Packers are an average run defense by almost every measure. They've held eight of 15 opponents below yardage averages, and eight opponents surpassed their season YPC average against the Packers. They are 16th in the league in yards per game allowed and 26th in yards per carry allowed.

There are too many factors involved to award an advantage in this matchup. The Lions aren't likely to devote a lot of snaps to the run game, and we have no idea what string defense the Packers are going to play for the majority of the game. Draw. 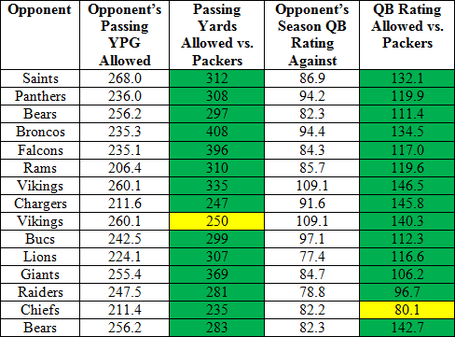 Wow. Still perfect. Even in his "bad" game against the Chiefs, Aaron Rodgers managed to gain more yards than the Chiefs typically allow and he met the Chiefs' passer rating allowed average. Rodgers is going to win the MVP this year and rightfully so. His season passer rating of 122.5 is unreal. His 45-6 touchdown to interception ratio is phenomenal.

BUT, the Lions aren't likely to face Rodgers for a full four quarters. Backup Matt Flynn is young and fairly untested, but not horrible. In his short career, he has completed 58% of his passes with three touchdowns and four interceptions, for a 68.1 passer rating. 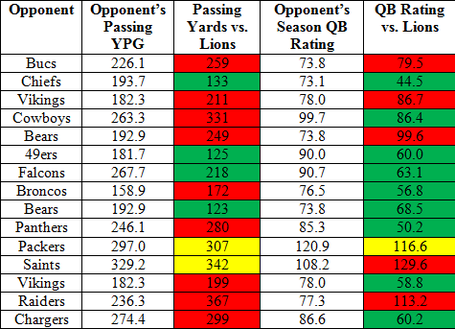 The Lions pass defense looks awfully similar to the Packers. They have been giving up a lot of yards, but have been very good at holding teams below their passer rating averages. The Lions are similarly opportunistic with 20 interceptions forced (fourth most).

It's hard to award an advantage, again, not knowing how much first string we will see from either team, but I think it's safe to say the Packers still hold an advantage, just not as big as it usually would be. Packers +1.5. 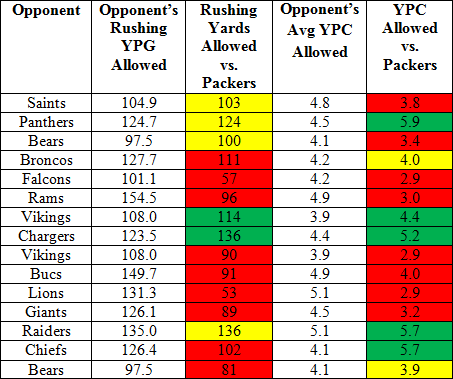 The Packers run offense doesn't look too threatening on paper. They've only exceeded defensive averages twice in terms of yardage and five times by yards per carry. But, as we've all seen, this hasn't slowed down the Packers offense at all this year. The Packers have scored 13 more points than any other team in the league. 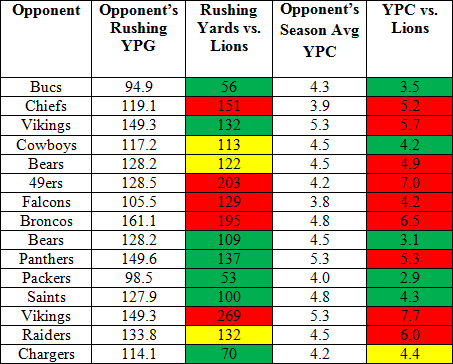 The Lions are pretty average at stopping the run despite their low ranking. They have faced some of the toughest running games in the league and have held several of them below their yardage average. The real concern is the YPC allowed, in which the Lions are tied for last at 5.1 a carry allowed.

However, the Packers don't carry much of a threat on the ground, as they rarely commit a lot of plays to the run. In fact, they have the sixth-least amount of rushes this year. The running game should be a complete non-factor in the outcome of this game. Draw.

The Lions end up with a +1.0 advantage. The first thing that jumped out at me, after making these charts, was how similar these teams are. Both sport elite offenses that focus heavily on their elite quarterbacks and give little attention to the running game. Both defenses give up plenty of yards through the air, but are opportunistic in forcing turnovers and holding teams to low passer ratings. Both run defenses are average, but show signs of being solid.

The biggest difference this week will be motivation. The Packers have almost no motivation to win, other than keeping their home-streak alive against the Lions, while the Lions have a fair amount of motivation to win. A win could help pave an easier path in the playoffs. Therefore, the streak will finally end this year. Lions 27, Packers 17.