One of the few positive things to emerge from Sunday's game against the New Orleans Saints was the play of Nick Fairley. Of course, like most good things as a Lions fan, it was taken away from us too early. Fairley left the game with an injury and barely saw the field after the second quarter. But let's not focus on this. Fairley will eventually rebound from his injury, and if Sunday night was any indication, his future is very bright. Despite only getting about half of the snaps in the first quarter, he still managed two tackles (one for a loss) and one sack. Let's go to the tape.

The first breakdown comes on a second-and-four. Fairley doesn't make a tackle on the play, but he comes barreling in through the line and eliminates any chance of a cutback lane. 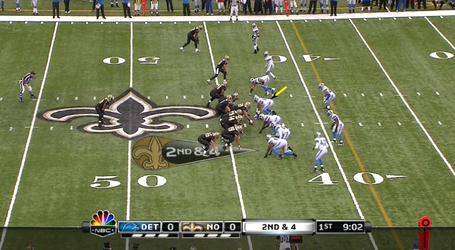 As you may have expected, the man getting poked in the back by a giant yellow arrow is Fairley. 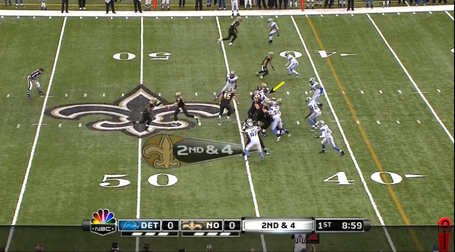 Before the hand-off exchange has even been made, Fairley has beaten his man to the inside and is headed for the backfield. 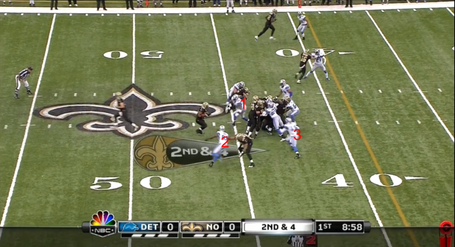 Mark Ingram is left with three options, none of which are ideal for him. One: cut back and get hit by Fairley. Two: try to bounce it outside, where Cliff Avril has beaten his man. Or three: run into the hole where solid-tackler Amari Spievey is waiting. Ingram wisely chooses option three and fails to pick up a yard on the play.

The second play I'll be highlighting was a key second-and-10 in the red zone. The Saints ran right (away from Fairley again) looking to make it a third-and-manageable situation. Fairley didn't let that happen. 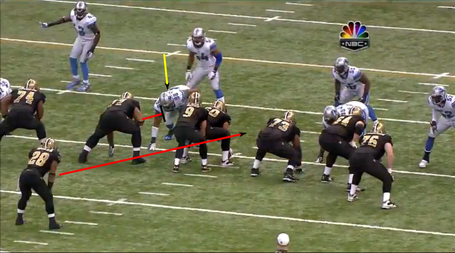 The intended hole on this play is between the center and right guard. The left guard's responsibility is to try and seal Fairley to the left. As we will see, he cannot physically do so. 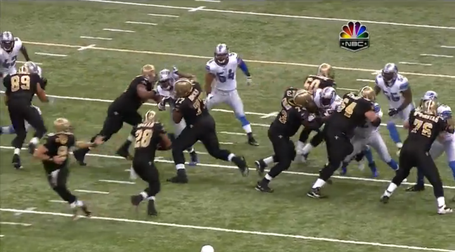 The guard's quickness gets him in a great position to seal Fairley. However, the guard doesn't account for Fairley's incredible strength. Fairley ends up pushing the guard directly into the intended opening, leaving Ingram with no options other than to try and find a cutback lane: 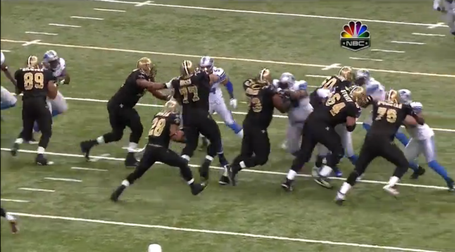 As you can see, the hole that was once there is completely gone by the time Ingram wants to hit it. Fairley's strength forces Ingram back left, where defenders are waiting for him. However, Fairley isn't satisfied enough by merely plugging a hole. No. He wants to make the play; he wants his tackle for loss. 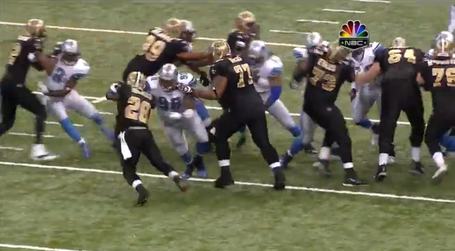 Fairley gets what Fairley wants. He is able to shed the guard with ease and wrap up Ingram in the backfield. This was easily Fairley's best play of the night and it highlighted all of his assets. He showed incredible strength that disrupted the play. But he also showed he has an incredible motor and plays to the whistle. Oh, and by the way, the guard he was lined up against? 2010 Pro-Bowler and second team All-Pro Carl Nicks. Not bad for a rook.