Breaking Down The Minnesota Vikings Offense

Share All sharing options for: Breaking Down The Minnesota Vikings Offense

After two straight losses to two of the best teams in the NFL, the Detroit Lions are set to face off against a struggling Minnesota Vikings team at home on Sunday. The two met in the third week of the season at the Metrodome in a game that the Lions won in overtime after falling behind 20-0 in the first half. Since then a lot has changed for both teams. The Vikings come into this game with a different quarterback at the helm in Christian Ponder, and they most likely will be without star running Adrian Peterson. In today’s post, I will (re)break down the Vikings offense and discuss what has changed in the last 11 weeks.

I guess it goes without saying that the Vikings, sitting at 2-10, are looking forward to next season and are really just in evaluation mode for the final weeks of the season. It also goes without saying that the biggest player the Vikings coaches have their eyes on is their rookie quarterback, Christian Ponder. After Donovan McNabb started the first five games of the season, Ponder took over after the Vikings were blown out by the Bears in Week 6 by a score of 39-10. As such, both McNabb and Ponder have had an equal number of starts at this point in the season, so I think it would be a great time to evaluate who is doing/has done the better job.

For starters, both McNabb and Ponder have led the Vikings to one win and five losses, so they are equal in terms of record. In terms of numbers, however, Ponder has actually been the better quarterback, which is saying something considering Ponder is just a rookie. In his six starts, McNabb had a passer rating of 82.9, a completion percentage of just over 60, and four touchdowns to two interceptions. In the same number of starts, Ponder has a 76.6 passer rating, a 56.0 completion percentage, and nine touchdowns to eight interceptions.

Clearly, McNabb was the more efficient passer, but the point of an offense is to score points, not just complete passes. In that regard, Ponder has been slightly better for the Vikings, as they are scoring 20.8 points under Ponder, while scoring 20.2 under McNabb. However, Ponder has carried this Vikings team the last couple of weeks without Adrian Peterson and has actually put up some pretty solid numbers as of late. Just last week, Ponder completed 29-of-47 passes for 381 yards and three touchdowns with two picks. Overall, I think it’s safe to say that Ponder has a fairly bright future in the NFL.

In terms of scheme, the Vikings really aren’t doing anything with their offense that they didn't with McNabb. The Vikings under offensive coordinator Bill Musgrave run a West Coast Offense and drafted Ponder because he had run the WCO at Florida State. While I watched the Vikings game against the Broncos last week, I felt that the Vikings were pretty much running the same offense I had seen earlier in the season with McNabb. I actually thought that Musgrave was a little more aggressive against the Broncos than he was against the Lions, but that could have simply been because they were going up against a lesser capable defense.

For this week’s play breakdown, I am going to take a look at Percy Harvin’s 52-yard score against the Denver Broncos. In the play, Harvin is in the slot with a receiver outside and a tight end on the line. The whole play is really just designed to get the ball to Harvin in space and let him use his abilities to turn it into a potential big play. There is also a safety option with the tight end running the same slant on the other side of the field. 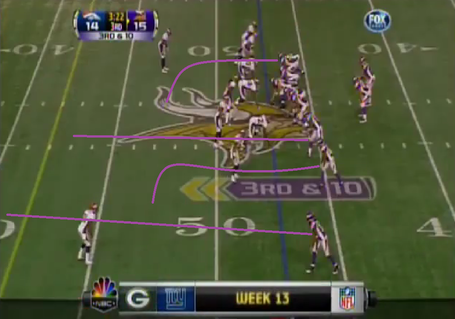 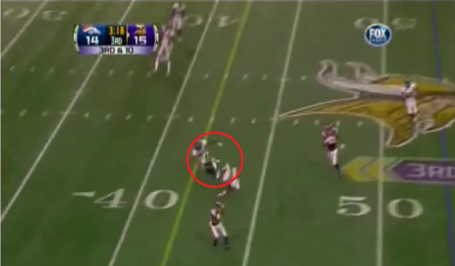 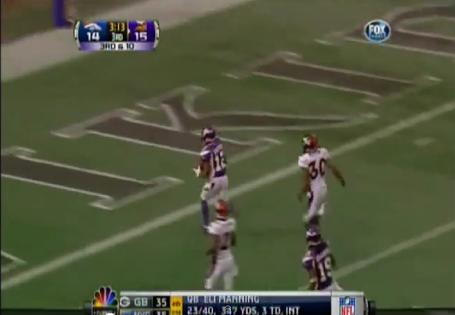 To free Harvin, the Vikings send both receivers on Harvin’s side of the field deep. That does two things for the Vikings offense. For one, it takes the safety out of the play, as the safety is responsible for taking away the deeper routes on the play. Secondly, it leaves Harvin one-on-one with his defender on the flat with no one else around them. Luckily for the Vikings, the defender gets bumped into by Harvin and falls down on the play, which leaves him with a ton of space to run. In the end, Harvin turns the short eight-yard play into a 52-yard touchdown, which is really the West Coast Offense at its finest.

All in all, the Vikings offense definitely isn’t something to be reckoned with, especially without Adrian Peterson, but there are still enough pieces there that they deserve respect from a banged up Lions defense. While Christian Ponder certainly looks like he has a future in the NFL, I think it's going to be another week where a Christian gets thrown to the Lions.