Share All sharing options for: On Paper: Detroit Lions Vs. Minnesota Vikings

The Lions face the Vikings for the second time this season. The last time the two teams met, the Lions overcame an early 20-point deficit to shock the Vikings. This week, the stakes are much higher for the Lions. If the Lions are going to make the playoffs, this is an absolute must-win for them. A loss will cost them their best opportunity for a win on the schedule and will be a devastating in-division loss, likely costing them the tiebreaker with the Bears. The 2-10 Vikings seemingly hate Detroit and would love for nothing else than to keep them out of the postseason. Let's go to the charts. 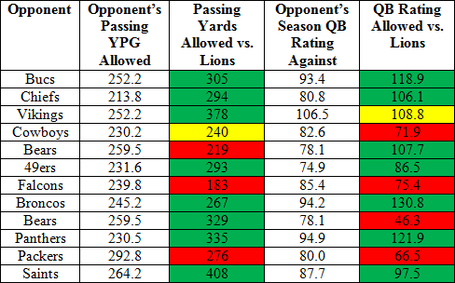 Matthew Stafford, once again, rebounded last week and put on an impressive performance. His total of 408 yards was the second most in his career, and had the Lions not been called for a ridiculous amount of penalties, he might have hit the 500 mark. Unfortunately, Stafford's offensive prowess was only good enough for 17 total points in a losing effort, but it was promising to see Stafford play well on the road for the first time since the Broncos game. The Lions now rank ninth in passer rating (91.4), 13th in yards per attempt (7.3) and eighth in completion percentage (63.1). 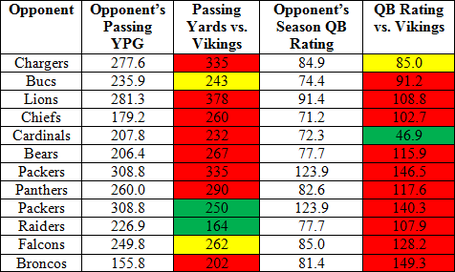 Mmmmmm ... Vikings depleted secondary. The last seven quarterbacks to go against the Vikings have surpassed a 100 passer rating. That includes a Mr. Tim Tebow, who had his best career passing game against the Vikings last week. The Vikings secondary is in absolute shambles, but don't take my word for it. Check out what Vikings fans are saying in the ASK P.O.D: Take 2 FanPost at the Daily Norseman. One fan describes their secondary as "two guys off the street and two rookies who were taken after the fifth round."

The stats aren't any much prettier for Viking fans. They rank 31st in passer rating allowed (106.5), T-29th in yards per attempt allowed (8.2) and have given up the most passing plays of 40+ yards (11). The only thing that can save the Vikings in this matchup is Jared Allen and the Vikings pass rush. The Vikings have amassed 35 sacks this season (T-2nd) and Allen has tallied 14.5 on his own (2nd). Allen had three sacks in the previous matchup, but it didn't prevent Stafford from lighting up the Vikings in the second half. Allen may get to Stafford again on Sunday, but the Lions will still embarrass the Vikings secondary. Lions +3. 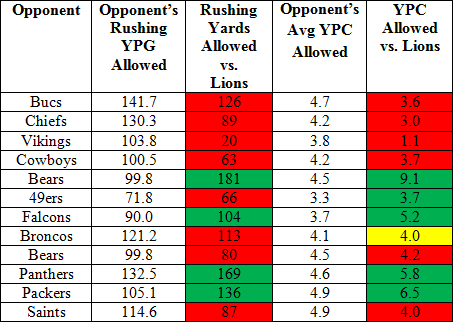 The Lions had a great opportunity to take advantage of the Saints weak run defense last week. Unfortunately, they fell behind early and lost the services of Kevin Smith. Smith is unlikely to go this week, as the only time he made it to the practice field was early Friday, and he was forced to leave upon being unable to make cuts in a drill. Be prepared for a healthy dose of Maurice Morris, and I wouldn't be surprised to see Aaron Brown for the first time this year. 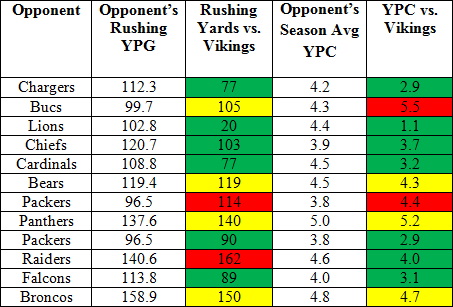 When the two teams faced earlier in the season, the Lions only rushed for 20 yards on 18 carries. It's hard to imagine the Lions failing that badly again, but it's clear they don't have the advantage in this matchup. Because this advantage is unlikely to have a huge impact on the final result of the game, it is only Vikings +1. 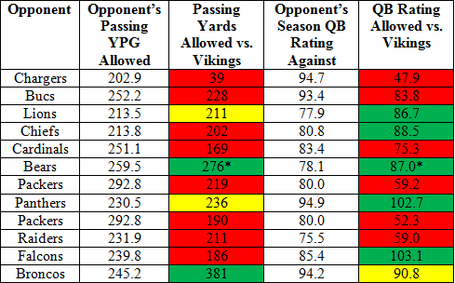 *The Bears game featured both Donovan McNabb and Christian Ponder. All games after that were solely Ponder.

Since we've last checked in with the Vikings, they've given McNabb the Old Yeller treatment and handed the reign to the young rookie Ponder. As a starter, Ponder has only surpassed opponent's averages in yardage in one of six games but has put up a passer rating of 100+ twice. His overall stats look very much like that of a rookie: 56.0 completion percentage, 76.6 passer rating, nine touchdowns and eight interceptions. Ponder is questionable to play and he only practiced on a limited basis on Friday. If he can't go, it'll be Joe Webb behind center. 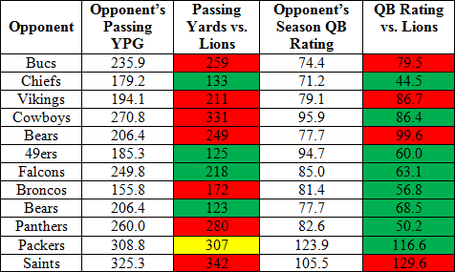 The Lions overall ranking has taken quite a hit after facing the best two passing attacks in the past two weeks and losing the services of their best two players in the secondary: Louis Delmas and Chris Houston. The Lions will likely be without the two again this week. Still, the Lions were able to hold the Packers and Saints to somewhat near their season averages.

The Lions secondary has a chance to catch their collective breaths this week, as they won't have to face a threat anywhere near that of Green Bay or New Orleans. If Ponder can't go, the Lions shouldn't have any trouble stopping the Vikings. Ponder is a more interesting case. He has shown signs of excellence, but he's still prone to a costly rookie mistake. Lions +1. 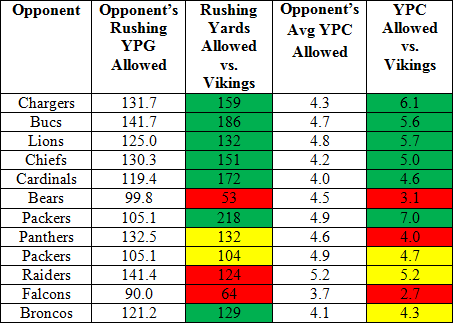 It is worth noting that Adrian Peterson went down in the Raiders game and hasn't returned since. As you can see, the Vikings have struggled without him, only surpassing opponents' averages once in the past three weeks. However, they still are playing fairly well without him. Peterson is questionable to play this week. He has practiced a couple times, but has been limited in his participation. Overall, the Vikings rank third in yards per carry (4.9) and have the sixth-most rushes of 20+ yards (13). 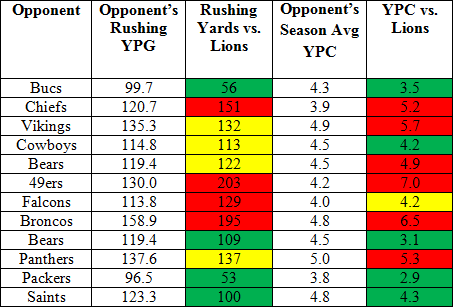 The Lions are slowly creeping into the "average" category as a run defense. Four opponents have been held below yardage averages, while four have surpassed and four were within 5% of their averages. Detroit has faced some of the most difficult rushing attacks this year and has (for the most part) held its own. Unfortunately, they will be without two of their top three defensive tackles, as Ndamukong Suh will still be serving his suspension and it looks like Nick Fairley will be out with his foot injury.

Most of this matchup is dependent upon Peterson's availability. But, regardless, it looks like the advantage is on Minnesota's side. If Peterson is in: Vikings +1.5; if he's out: Vikings +0.5.

The Lions come out with the advantage regardless of all scenarios. If Peterson plays, it's Lions +1.5; if he doesn't it's Lions +2.5. Looking back on the previous matchup between these two teams can strike fear in the Lions fan base. But it's important to remember how big homefield advantage is to the Vikings. The Metrodome was rocking and caused all sorts of trouble for the offensive line. Allen won't have the benefit of a deaf Jeff Backus this week. The offense shouldn't struggle early like they did in the previous matchup and the Lions should roll with relative ease. The only reason to worry is if AP plays and immediately busts out a few huge runs and if the Lions' beaten-up secondary struggles. I really don't expect either of those things to happen. Lions 31, Vikings 17.