Hello fans, new and old. After a suggestion from a fellow reader, I've decided to preview the biggest game of them all. For those who are familiar with my Detroit Lions "On Paper" previews, much of this will be familiar so please forgive the disclaimer. However, I've changed the format a little bit, and here's how it works:

"On Paper" focuses on a few important stats to predict the outcome in many phases of the games. The key aspect of my previews is a focus on past game performances but taking into account the strength of the opponent. For example, a team that allows 270 passing yards in a game is seemingly having a bad day. However, if that game is against the Saints, who average around 277 passing yards a game, the defense actually did a somewhat good job holding the Saints below this average. These previews focus on such statistics that mostly go unnoticed.

I've created eight charts (four for each team) focusing on the main four aspects of the game: pass offense, pass defense, run offense and run defense. Each chart is color coded. Green signifies a positive outcome for the team (ie: held opponent below their average on defense, or surpassed their opponents averages on offense) and red obviously signifies a poor performance. I match the units that will face off against each other (ie: GB pass offense vs. PIT pass defense) because I've never understood why some previewers insist on comparing a teams' offenses to each other. At the end of each section, I predict a final statistics line based on the numbers and give one team an numerical advantage from 1-5 (1=minor advantage, 5=game-deciding advantage). The advantage number is based not only on talent, but how likely the matchup will affect the final outcome. To use an example from this game: Pittsburgh has a big advantage in their run defense, but because Green Bay typically relies on their passing game, the advantage is listed as 2.5 rather than 4 or 5.

Anyways, I hope that all makes sense, and let's get to it!

First, let's take a look at Ben Roethlesberger and the Steelers passing attack.

(All averages based on Regular Season statistics) 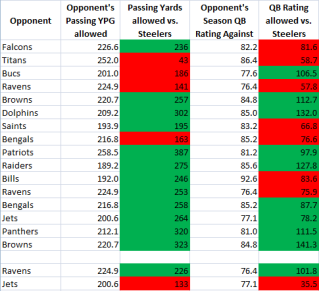 This season, the Steelers have surpassed their opponent's yardage averages in 13 games (of 18), and they have accumulated a QB rating of higher than their opponent typically allows in 10 of 18 games. However, Big Ben was suspended for the first four games, so I am going to just ignore those games. That leaves the Steelers with above-average yardage in 12 of 14 games and an above-average QB rating in 9 of 14 games.

That means we can expect Pittsburgh to perform slightly better than the averages that Green Bay allows. The Packers are allowing 194.2 yards per game, and allowing a QB rating of just 67.2. Given this information, the Steelers are likely to throw for around 230 yards with a QB raing of around 73. 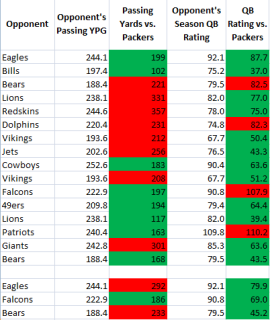 Now let's look at this from the Green Bay perspective. The Packers have allowed more yards than their opponents usually average through the air in 10 of 19 games, but their opponents have failed to meet their average QB rating in 15 of 19 games. Therefore, we can assume that the Steelers are somewhat likely to get more yards than they average, but will very likely fail to reach their average QB rating. The Steelers are averaging. 225.1 yards per game and a QB rating of 95.2. Their predicted output, based on the Green Bay defense, would then be around 250 yards with a QB rating around 80.0.

Combining these two predictions, we get a final line for Pittsburgh passing offense around 240 yards with a QB rating of 76.5. This would be a somewhat below average game for the Steelers, but Big Ben has certainly won games with poorer numbers. Still, Green Bay has the slight advantage in this match up. Packers +1. 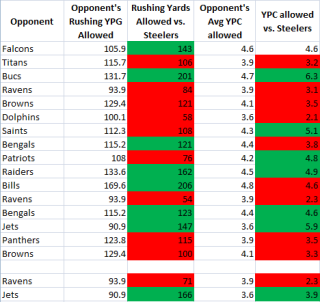 The Steelers running game has been a slight disappointment this year. They've only mustered above-average rushing yards in 8 of 18 games, and surpassed yards per carry averages in 7 of 18 games. Though they rank a respectable 11th in yards per game, that ranking drops all the way down to 17th in terms of yards per carry (4.1). The Packers are giving up 114.9 yards per game and 4.7 a carry. We can expect the Steelers to fall slightly short of those numbers; around 100 yards and 4.3 a carry. 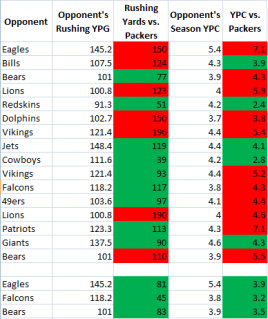 Green Bay has allowed above average rushing yards in only 7 of 19 games, but have allowed a higher yards per carry in 11 of 19 games. Its worth noting that in 10 of their 19 games, the Packers went up against a top 10 rushing team (in terms of yards per game).

Anyways, the Steelers are averaging 120.2 yards per game and 4.1 a carry. Given the Packers history, we can expect a somewhat lower number of yards, but a higher number in yards per carry. The Steelers should gain around 105 yards and put up 4.4 a carry.

Both predictions are very close to each other, so I can confidently say that the Steelers should gain around 103 yards on the ground for an average of about 4.3 a carry. Interestingly, this would mean the Steelers would only rush it about 24 times this game, which is below their average of 29.4 carries per game.

This is a good match up between two slightly above average units. The injury to Steelers Maurkice Pouncey may be enough to tip the advantage to the Packers, but he has not been ruled out yet. This one goes down as a draw. 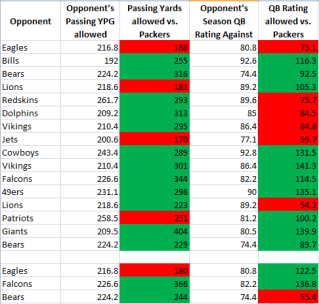 Aaron Rodgers and the Packers passing attack have put up some monster numbers in numerous games this year. They have out-gained the defensive averages in yards in 14 of 19 games and surpassed QB rating averages in 12 of 19. It should be noted that Rodgers did not finish the game against the Lions and did not play against the Patriots, but the numbers are hardly affected by either fact.

One interesting finding is that the Steelers will be the best defense Aaron Rodgers has faced all year in terms of QB rating allowed. In fact, the Steelers rank 2nd in this category with only....Green Bay...have a better passing offense. Still, considering all of this information, the Packers should slightly outperform the Steelers' averages in both yards (214.1) and QB rating (73.1). A likely stat line would look like 240 yards with a QB rating of 78. 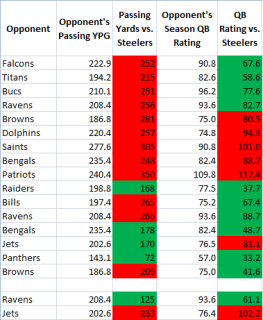 The Steelers have allowed opponents to rack up more yardage than their average in 13 of 18 games, but have allowed higher-than-average QB ratings in just 7 of 18 games. On average, the Steelers hold their opponents under their QB rating average, but allow more yards than their opponent typically averages. The Packers average 257.8 yards with a QB rating of 98.9. The Steelers have only faced one opponent averaging more yards per game (Saints), and one team with a better QB rating (Patriots). In both games, the Steelers defense was dominated, failing to hold either team below yardage or QB rating averages. Therefore we can assume the Packers will perform somewhere around, or slighly below their season averages. Around 270 yards with a QB rating of 95.

Averaging out the final lines we can assume that Rodgers will throw for around 255 yards and have a QB rating around 86.5. If the Packers are able to achieve such numbers, they would be more than pleased. Though both numbers are below their season average, those are still excellent numbers against a good Steelers defense. Packers +1.5. 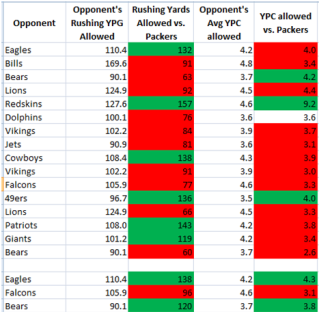 The Packers running game has been trouble ever since they lost Ryan Grant in week one. They have only surpassed yardage averages in 9 of 19 games, and reached their opponent's yards per carry average in 5 of 19 games. We can then assume that Green Bay will gain yardage very close to their opponents average, but will fail to reach the opponent's yards per carry allowed average. The Steelers are only giving up 62.8 yards a game on 3.0 a carry. Green Bay should only gain around 60 yards while averaging a poor 2.6 yards per carry. One small reason to keep Packer fans optimistic is that their running game has improved a little towards the end of the season. They have outgained their opponents averages in four of their last six, but have still only met yards per carry averages in two of those games. 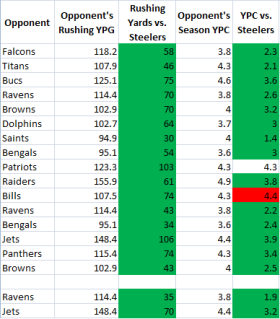 The Steelers run defense is not only top in the leagues (by far), but it is one of the best in NFL history. Not one opponent this year has met their average yards and only one team has managed to have an above-average day against the Steelers in terms of yards per carry. This is easily the most impressive chart I've ever made for a team in the 2 seasons I've been doing this.

The Packers are averaging 100.4 yards per game and 3.8 yards per carry. Given how dominant this defense is, you can expect the Packers to significantly under-perform in both numbers. A good point of reference is the Dolphins who average very similar numbers to the Packers (102.7, 3.7). Against the Steelers, the Dolphins accumulated 64 yards on 3.0 a carry. Therefore, the Packers should gain around 60 yards and average 3.0 a carry.

Averaging out the two predictions leave the Packers with a woeful day on the ground. They'll likely accumulate 60 yards on about 2.8 a carry. This is a huge mismatch for the game, but luckily for Packers fans, they've never really relied on their running game this season. They rush the ball 26.3 times per game on average which puts them at 20th in the league. Still, I have to give a significant advantage to the Steelers. Steelers +2.5.

In the end, we come out with a draw, but let's look at the predicted stat lines, and see if that provides some clarity.

Hmmm....not really. The numbers basically confirm what most of us already know: the Packers have the clear advantage in the passing game, while the Steelers have the clear advantage on the ground. This game looks like it will come down to the intangibles, which I believe favor the Steelers. 25 of the 53 men on the Steelers roster have played in a Super Bowl. The Packers only have 2. When teams are so evenly-matched, games are decided by the outcome of a few, key plays. Experienced players will always have the advantage in crunch-time situations. The Steelers also have the advantage in perhaps the most important intangible: fan song parodies. Don't believe me? Check for yourself. Green Bay could only muster up an adorable, but awkward Lady Gaga parody, while the Steelers counter with a somewhat amazing cover of Blue Oyster Cult's "Godzilla" (both via deadspin.com). So I have to take the Steelers in a close fight. Packers 20 Steelers 23.