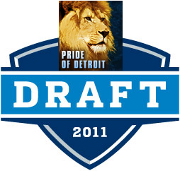 The past two years, I have run the Pride of Detroit Community Mock Draft as a way to get readers involved in predicting what will happen with the actual NFL Draft. Basically, 32 users are assigned to be the 32 teams' general managers, and picks are made following the same order that the NFL will follow in April. Write-ups explaining the picks are put together, and the rest of the community can vote and comment on whether or not they approve of the picks.

Like last year, the plan for the 2011 Pride of Detroit Community Mock Draft is for it to be two rounds long. That means there will be 64 picks made from now until the days leading up to the actual 2011 NFL Draft. The way picks are submitted is via e-mail, and there is a schedule to stick to. Following the schedule makes life much easier for me as I try to keep things organized, so it's important that you are efficient with getting your picks in.

To sign up for the 2011 POD Mock Draft, simply leave a comment on this post expressing your interest in getting involved. In your comment, list your top three desired teams in order. I am not going to assign people to teams based on a first come, first serve basis, but rather based on how active you are on the site. This allows regulars to get involved, and by leaving your top three most desired teams, I can hopefully assign you to one that you want. (Please note: the Lions are not one of the teams that are available currently. If DrewsLions wants to be their GM for the third straight year, the position is his.)

Rules, how to make picks and a schedule for making picks will be posted later this week once the 32 general managers are in place. Until then, I ask only three things of you before you sign up: 1) make sure to read the directions carefully, as I will likely not assign you a team if you can't even read through this post; 2) if you want to be a GM, please be able to write a coherent paragraph or two explaining your picks (i.e. limited spelling and grammatical errors); and 3) be able to stick to the schedule that is posted later in the week, as you will be replaced if picks are late. I will allow people to sign up for the next day or two and will put up a post outlining who is assigned to what team later in the week.