Last week I posted a video of the Detroit Lions' defensive line in Madden 12, which comes out on August 30. I also gave a rundown of the player traits for Ndamukong Suh and Isaiah Ekejiuba. Player traits are not numerical ratings, but rather different aspects that players can excel in. With Suh, for example, he was listed as a player that utilizes the swim move, spin move and bull rush move, and his consistency was rated four out of five stars. He was also characterized as a player with a high motor.

The player traits for two more Lions players have since been posted. Here is the rundown of traits for rookie defensive tackle Nick Fairley: 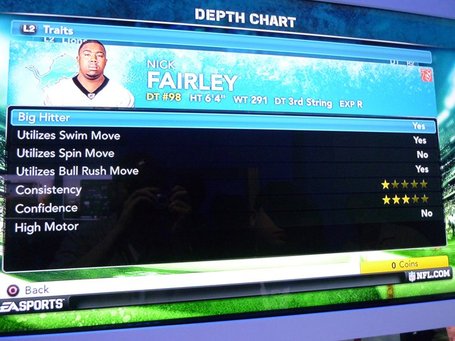 I'm guessing Fairley's consistency is only one star because he is a rookie. My guess is that in franchise mode he will be able to build it up to a higher level as he develops over time. The same goes for confidence, which is at three stars for all players.

A look at Calvin Johnson's player traits can be found after the jump. 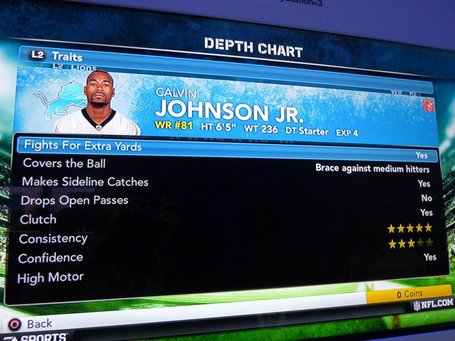 The reason EA Sports still calls him Calvin Johnson Jr. is to differentiate between him and Bryant Johnson on the field. If Bryant gets released as many expect he will at some point before next season, I would imagine the "Jr." would be dropped from Calvin's name in a roster update.

One thing that probably needs no differentiating is the player traits for the two Johnsons. Calvin's is about as perfect as it gets, and I'm betting Bryant's is the complete opposite based on how he has played the last two seasons for the Lions. That's why I'm thinking he will be sent packing this year, allowing EA Sports to do the same with the "Jr." on the end of Calvin's name.