Vote For Pride Of Detroit (Again)

Share All sharing options for: Vote For Pride Of Detroit (Again) 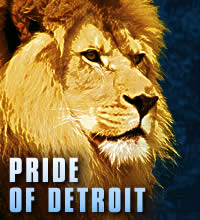 Last month I called upon you guys to help Pride of Detroit win a best local blog contest. The winners haven't been announced yet, but in a matter of hours after the post went up POD jumped to the top of the rankings, so I'm feeling pretty good about our chances.

As it turns out, that's not the only local blog contest POD received a nomination for. CBS Detroit is holding a Most Valuable Blogger Awards contest and Pride of Detroit is one of the sites you can vote for in the sports category.

To vote in this contest, simply click here, scroll down to Pride of Detroit and hit vote. I also encourage you to vote for SB Nation Detroit (you can vote more than once per day by using different Internet browsers), the other site I run.

After the ridiculously awesome display of support POD got in the last contest, I'm sure you will come through again this time around. The competition is much fiercer, though, so every vote counts.