Break It Down: A Closer Look At Sunday's Key Play Against The Buccaneers

Share All sharing options for: Break It Down: A Closer Look At Sunday's Key Play Against The Buccaneers

Easily the biggest play on Sunday was Matthew Stafford's connection to Calvin Johnson on 4th and 3 midway through the second quarter. It was a gutsy call, but it paid off in the end. Let's take a closer look at that play and how Calvin and Stafford made it look so easy.

Here's the basic play from the offensive point of view. Titus Young and Nate Burleson run a fly and out route, respectively. As Stafford is looking right the entire play, they are mostly distractions and fourth and fifth options if the play breaks down. Jahvid Best looks for a blitz from the strong-side linebacker, but when he sees it isn't coming he releases towards the middle of the field and becomes a great safety-valve for this play.

The real focus of this play is the routes by Brandon Pettigrew and Johnson. Pettigrew runs a curl as a decent option for a first down, while Calvin pulls a double-move, attempting to get the safety to bite and beat his corner deep. 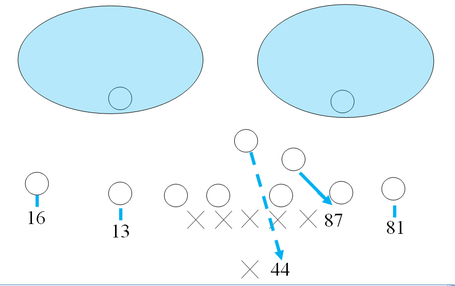 Here's the play from the defensive point of view. The Bucs are playing man-to-man with the two safeties in deep zones. The weak-side linebacker's eyes are on Best, while the strong side, though hinting at a blitz, is playing man on Pettigrew. If Best stays to block, the weak-side linebacker will likely rush the passer. He doesn't, so the linebacker is forced into a mismatch on Best. If the play goes to Best, he likely gets the first down on this play.

Before we get back to Johnson and his double move, let's check out the offensive line play. 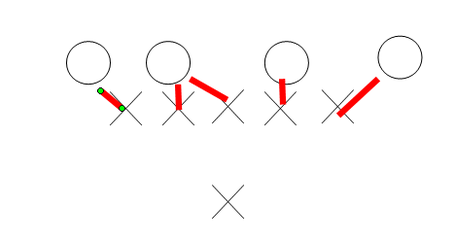 (Best and Pettigrew removed, as they are not blocking on the play)

The interesting thing here is that Rob Sims and Dominic Raiola double team the right defensive tackle, while Stephen Peterman is left to fend for himself.  Here's what happens: 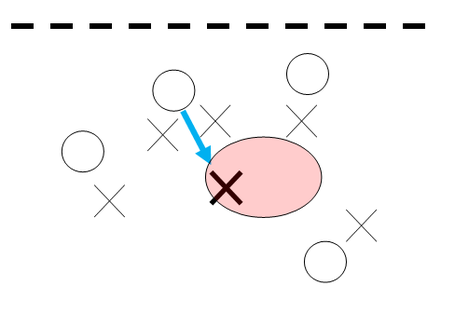 The tackles both do an excellent job keeping their assignments out of the play. While it appears Gosder Cherilus has been beaten, he actually does a fairly good job of allowing the end to run himself out of the play. By the time the end is on his way to Stafford, the ball is already out of his hand.

The guard play was key in this play. Raiola and Sims almost ruin this play, allowing the tackle to split them and almost get to Stafford. If this play takes another half of a second to develop, Stafford would be on the ground. Peterman, though, saved the play. He held his own against his man and allowed Stafford to have a decent pocket to step into as he threw the ball. Stafford shows poise here, seemingly unaffected by the collapsing pocket around him.

Now back to Johnson and the safety: 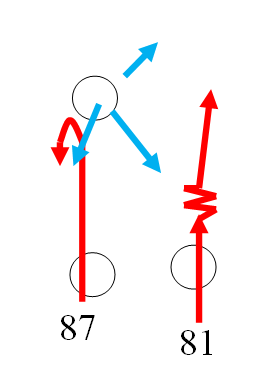 The safety's eyes are on Stafford for the entire play. At the time when Johnson fakes the short route, Stafford subtly pump-fakes. At this point, the safety has three options: jump the Pettigrew route, jump the Johnson route or play it safe and drop back. Obviously, the correct choice was behind door number three. The safety, however, chooses option four: nothing. He is completely frozen by the pump-fake, stays flat-footed and allows Calvin to run by him. Calvin beats the corner (Aqib Talib) just enough and Stafford throws a near-perfect ball. Touchdown.