Share All sharing options for: Breaking Down The Kansas City Chiefs Defense

Before I begin, I would like to give a big shout out to the great work at Arrowhead Pride. A lot of the information I'm about to share comes from this FanPost by Texas Chief, and the great work by Joel Thorman .

In three days' time, the Detroit Lions offense will take on a Kansas City Chiefs defense that gave up 41 points to the lowly Bills. From everything that I have heard or read so far this week, most people expect the Lions to light up the Chiefs in a similar fashion. To that, I would have to say not so fast. The Chiefs defense is a very unique and good one, and it is certainly a defense that will cause trouble for the Lions.

Like most defenses in the NFL, the Kansas City Chiefs' defensive mastermind is their defensive coordinator, Romeo Crennel. Crennel has one of the best defensive pedigrees of any coach out there, having coached under both Bill Parcells and Bill Belichick. While most of us remember him from his failed head coaching stint with the Cleveland Browns, I should remind people that he is the man who was responsible for the New England Patriots defense from 2001-2004, the era in which the Patriots won three Super Bowls.

On the other hand, Romeo Crennel’s style of defense isn’t all that similar to what the Patriots run now. The Chiefs are actually the only team that I know of that runs a Cover 3 scheme. A Cover 3 (C3) scheme is where the defense actually drops three defenders to cover the deep portion of the field. Usually teams that play this type of coverage will split the deep part of the field into thirds, and each defender will cover each deep third. However, the Chiefs often play a C3 coverage called Quarter-Quarter-Half (QQH), where one safety covers half of the field while a corner and a safety cover one quarter of the deep field (see diagram below). 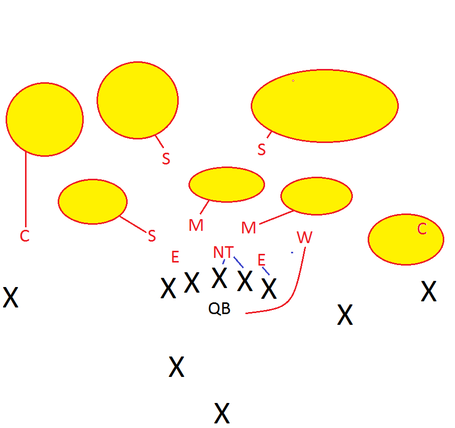 In the above diagram, you can also see that the Chiefs employ a 3-4 front, which means that there are three defensive linemen and four linebackers. In this scheme, it is vital that the nose tackle consistently takes on a double team, so that the rest of the linemen and linebackers face one-on-one matchups or open up pass rushing lanes. In the diagram above, the nose tackle is shaded over the center and right guard, meaning that those two linemen would have to occupy the nose tackle, while the right tackle takes on the left defensive end by himself. This would, however, allow a free path to the quarterback for the weakside linebacker, unless he is picked up by the fullback or running back.

The situation above was a standard rush four, drop seven situation. When playing a 3-4 defense, it is very likely that the defense will rush five and drop six into coverage. The diagram below portrays a similar situation. In this situation, the nose tackle is shaded to the left of the defense, so the left guard and center have to take him on. The right defensive end is then blocked by the left tackle, which leaves a free pass rushing lane for the strongside middle linebacker. 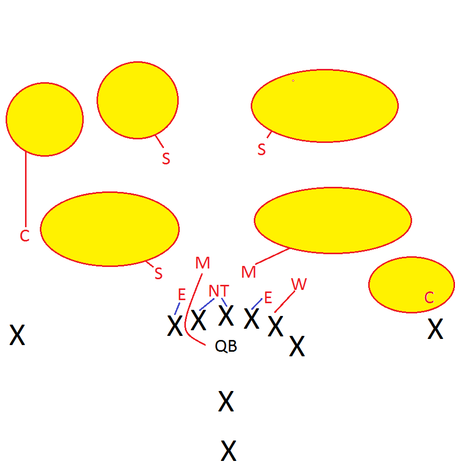 From the diagram above, it should also be evident why a scheme like this is dangerous. Both the strongside linebacker and the weakside middle linebacker are asked to cover the two shallow halves of the field instead of three defenders covering the same area like in the first diagram. On the other hand, utilizing such a scheme also provides the offense with three one-on-one matchups for the two defensive ends and the weakside linebacker, and a free lane for the middle linebacker. You just can’t accomplish that with seven men dropping back.

Of course, the diagrams above are for the defensive side of the ball. There are plenty of ways to block a five man rush. The tight end and fullback both could be used as blockers in the second diagram, but then the offense is limited to only three receiving options, which would be really easy to cover with the cover three look. The biggest thing the Lions have going for them going into Sunday is that Eric Berry isn’t playing. If you look at either diagram, it should become pretty evident how important the weakside safety (or free safety) is to a scheme like this. The free safety (i.e. Eric Berry) would be responsible for covering the one half of the field in a QQH coverage scheme.

Without him, the weakside cornerback, Brandon Carr, won’t be able to play nearly as aggressively as he would be able to with a safety like Eric Berry up top. Still, the Chiefs defense is very much a scary one. In the offseason, they added one of the best nose tackles in the game in Kelly Gregg. Plus, both Tyson Jackson and Glenn Dorsey are very capable defensive ends for a 3-4 defense. Add the fact that Tamba Hali is coming off of a 15 sack season on one side and impressive rookie Justin Houston is on the other side of the formation, and you have the makings of a great 3-4 defense.

Now, what do the Lions need to do against this defense? It’s actually pretty simple: block. As I stated before, 3-4 schemes are designed to create one-on-one matchups and pass rushing lanes. Doing those things means nothing if the players cannot win those matchups. Last season, the Lions did quite well against 3-4 defenses, allowing just 16 sacks in eight games against 3-4 teams. Keep in mind that those eight teams included going up against premier pass rushers like Clay Matthews (twice), Brian Orakpo, and Cameron Wake.

Overall, I like the Lions offensive chances against the Kansas City defense. I think the injury to Eric Berry is going to make a huge difference in this game. At the end of the day, I expect them to score at least three touchdowns, maybe even as many as five if the offense really gets going.