Break It Down: Tracking The Lions' Run Defense Adjustments

Share All sharing options for: Break It Down: Tracking The Lions' Run Defense Adjustments

The Chiefs rushed for 115 yards in the first half of Sunday's game. Although they led the league in rushing yards and yards per carry last year, it was a bit surprising to watch the Lions defense get consistently gashed throughout the first two quarters. However, the Chiefs could only muster 36 yards in the second half. While some of that can be attributed to the Chiefs abandoning the run game, the Lions also made some important adjustments that slowed the Kansas City's running attack to a crawl. Let's take a look at one of those adjustments.

The Chiefs' very first play from scrimmage was an end around to Dexter McCluster for 24 yards. The formation and resulting actions are pictured below. You can watch the play and follow along here: 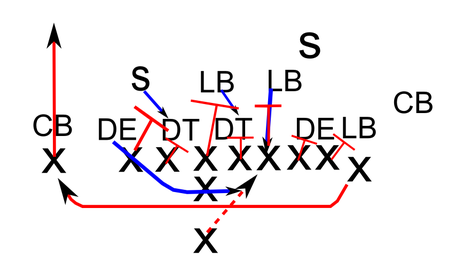 The Lions have stacked eight men in the box and sold-out defending a run to the right. The Chiefs have stacked the right side of the line and are representing a run that way all the way down to the blocking assignments. Because the linebackers and the safety (Louis Delmas) at the second level initially try to jump the play, it makes them extremely easy to block by the linemen releasing to the second level.

The biggest key to the success of this play for Kansas City is the reaction of the weak-side defensive end (left side of the picture). Here, Kyle Vanden Bosch goes unblocked. However, he is completely fooled by the play and gets swallowed up by the play-fake up the middle.  This gives McCluster the entire left side of the field to himself, as the corner on that side has turned to cover the receiver who is running a fly-route.

Delmas eventually sheds his block ...15 yards down field and makes the tackle. The Lions started the game a little too over-aggressive in scheme and in individual play, and initially, the Chiefs made them pay for it.

However, in the third quarter when the Chiefs tried an almost-identical play, Detroit was prepared and stopped it for a one-yard gain.

Note: Unfortunately, I could not find an online video of this play. If you have the game on your DVR or if you subscribe to NFL Game Rewind (like I do, and it's totally worth it), the play is at the 9:47 mark of the third quarter. If anyone can find the video online, I'll add it and give some props. 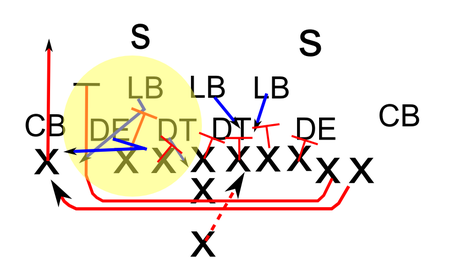 The Chiefs came out in a near-exact formation, except this time, the man next to McCluster is slightly off the line, and begins to motion to the left before the snap.  Instead of releasing to the second level, he is going to act as the lead blocker for McCluster.

The Lions counter, this time, with a less aggressive formation. They are in a very basic 4-3 formation. Again, the left and middle linebackers (Justin Durant and Stephen Tulloch, respectively) are swallowed up by the fake, but the important part of this play is DeAndre Levy and the defensive end (who happens to be Lawrence Jackson on this play). Levy initially bites on the fake, but recovers quick enough to avoid the left tackle, who is releasing to the second level. However, he is still in trouble, because the lead blocker is heading directly his way ... until he decides to ignore him to block the safety further down field. Levy meets McCluster four yards behind the line of scrimmage, forces him inside, but fails to take him down.

Jackson, too, is fooled by the fake to the right. But, like Levy, he recovers quick enough to be a force on this play. Because Levy has slowed down McCluster and forced him further inside, Jackson has ample time to get back into the play and take him down just as he's passing the line of scrimmage. It should also be noted that the corner on that side (Eric Wright) has beaten his man and was there to clean up any missed tackles had Jackson not taken him down.

Levy deserves a lot of credit for not biting on the play-fake, but the coaches deserve just as much praise. It was a great play call that allowed the defense to make a play. The formation from the first play made the defense vulnerable to misdirection and trickery. Let's hope that the coaches and players are able to make in-game adjustments like this all season.