Breaking Down The Minnesota Vikings Offense

Share All sharing options for: Breaking Down The Minnesota Vikings Offense

Some of the information I am about to share comes straight out of my post at House of Spears on the West Coast Offense. I also used plays from the 1991 San Francisco 49ers playbook for this post.

This upcoming Sunday, the Detroit Lions will be looking to get their third straight win of the season when they take on a 0-2 Minnesota Vikings squad. The Vikings in recent memory have gone through quite a bit of change on the offensive side of the ball, releasing long-time left tackle Bryant McKinnie, firing head coach/offensive coordinator Brad Childress and acquiring quarterbacks Donovan McNabb and Christian Ponder in the last 12 months. In place of Childress, head coach Lezlie Frasier and the Vikings hired West Coast Offense expert Bill Musgrave.

For a team that wants to run the West Coast Offense (WCO) and develop a quarterback, Musgrave was really one of the best choices out there. His six-year NFL career was spent backing up WCO legends like John Elway, Joe Montana and Steve Young and learning from the gurus of the West Coast in Mike Shanahan and George Seifert. After his playing career was over, Musgrave quickly became a successful quarterbacks coach with multiple teams, most notably developing Matt Schaub at the University of Virginia and Matt Ryan with the Falcons. He was also the offensive coordinator of the Carolina Panthers in 2000 and the Jacksonville Jaguars in 2003 and 2004.

I think most people reading this post have heard the term West Coast before and probably have a decent idea of what it is. For those who need a refresher, the West Coast Offense is basically an offensive scheme that uses short and intermediary passes to set up running lanes and longer passes. The primary key of the WCO is to get the ball in the hands of tough, reliable and play-making wide receivers. Aside from those two factors, the WCO generally uses a zone blocking scheme for rushing situations, although the Vikings apparently plan to use power or man blocking under Musgrave. Out of all of that, I think how the WCO manages to open up receivers as quickly as it does is the most unique part of the offense.

Below is a play that comes straight out of Mike Holmgren’s playbook back in 1991. It utilizes three wideouts, a tight end and a running back. In the play, all three receivers are stacked to the left of the formation. The outer two run crossing patterns with the wide outside receiver running it about 20 yards deep, while the inner one runs it about 10 yards deep. Looking at the diagram, one would think that the crossing patterns would be the primary targets of this play; however, it’s actually the third (slot) wideout that is the target. If the two crossing patterns are timed properly, it will eliminate the safety or nickel back covering the slot wideout, which would leave him one on one up top against the deep zone safety. 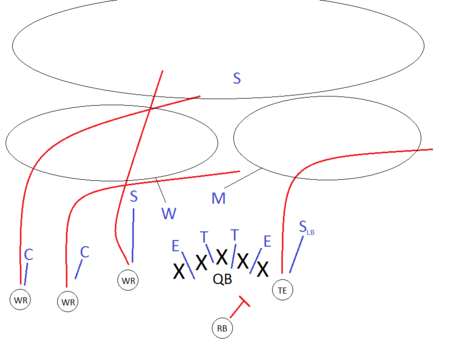 In case that doesn’t work out, the play also has a built-in fail-safe with the tight end running an out pattern against the strong side linebacker. In the case that there is too much pressure in the quarterback’s face, he will be able to roll out to his right and either hit his tight end for a first down or wait for one of the wideouts to open up in the crossing patterns. The play below also comes out of the same playbook. It takes advantage of two pass catching tight ends like the Vikings' Kyle Rudolph and Visanthe Shiancoe. 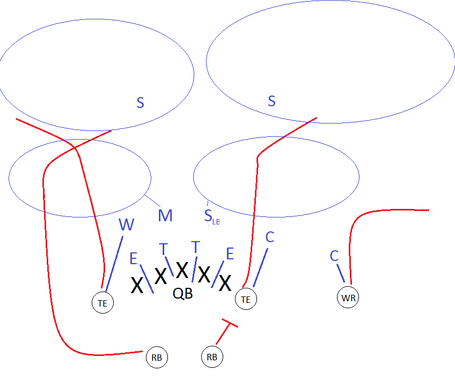 On this play, the offense utilizes a split back formation with two tight ends in the game and just one wide receiver. The play is designed so that the tight ends run outside slants about 15 to 20 yards deep, while one of the running backs leaks out of the backfield and uses the tight end's pattern as a pick of sort to get open deep. The fail-safe of the play is the wide receiver that is left all alone on the right side with the cornerback. If all else fails, the quarterback should still have a one-on-one matchup between his wideout and a corner on the right side.

This type of play is perfect for the Minnesota Vikings. The blocking back in this case could very well be Toby Gerhart, while the running back out running the pattern could be Adrian Peterson. As mentioned before, the two tight ends would be proven veteran Visanthe Shiancoe and 2011 second-round pick Kyle Rudolph. Plays like these will also be what the Lions need to defend on Sunday.

In essence, the West Coast Offense is not all that hard to defend and is very hard to defend at the same time. It doesn’t include many complicated formations; just your basic packages like split back, single back or I-formation, and the receivers run simple routes like the slants and in routes. What makes it difficult to defend against is the confusion caused by where these routes are run. As you saw in the diagrams above, these routes often converge on one spot, which often leaves defensive backs confused about who has which coverage.

That brings me to the key for the defense, which simply is to not make any mental errors. The Vikings are clearly going to try to get Adrian Peterson going, and he may very well rush for 120+ yards on the Lions, but the Vikings cannot simply beat the Lions with a run game. They have to pass the ball and the secondary needs to make sure that it doesn’t make any stupid mental errors against a pretty pedestrian passing attack. If they do, it could end up being a long day.

Overall, I like the Lions' chances in this game. The Lions have done a decent job against the run so far this season and can get away with Adrian Peterson having a big rushing day so long as Donovan McNabb and the rest of the passing attack is kept in check. All in all, I don’t expect the Vikings to score more than two touchdowns in this game.