Breaking Down The Minnesota Vikings Defense

Share All sharing options for: Breaking Down The Minnesota Vikings Defense

Some of the information I am about to share comes from my post at SideLion Report last season about these Vikings.

When you think of great defenses in the last five years, the Pittsburgh Steelers, Baltimore Ravens and maybe even the Chicago Bears come to mind. However, the Minnesota Vikings have actually had a top 19 10 defense four out of the last five years. A lot of that success can definitely be attributed to current head coach Leslie Frasier, who was the Vikings defensive coordinator from 2007 to 2010.

Frasier’s background as a coach is an interesting one, and it’s definitely one that has shaped this defense. His NFL coaching career started with the Philadelphia Eagles in 1999, when the late great Jim Johnson was coaching the Eagles defense. There, he learned the intricacies of Jim Johnson's all-hell blitzing defense that some like to call a 4-3 zone blitz scheme. After that, he became the defensive coordinator for Marvin Lewis in Cincinnati in 2003 and 2004, but he was fired after two seasons of the Bengals defense ranking near the bottom of the league. He was subsequently picked up by Tony Dungy and the Colts for the 2005 and 2006 seasons before joining the Vikings in 2007.

I reckon his experiences in Indianapolis are where he picked up the Tampa 2 from, and that would be a great place considering Tony Dungy is one of the inventers of the scheme. Still, the Vikings defense hardly runs a Tampa 2. Leslie Frazier and his puppet defensive coordinator Fred Pagac run a scheme that uses elements of many defenses much like the Lions. With that being said, I think their scheme can be best described as an aggressive Tampa 2.

I watched about two quarters of the Vikings game against the Buccaneers from last week and also went over some highlights from the preseason and their Week 1 matchup against the Chargers. Here is what I can see: the Vikings play Tampa 2 on many passing down situations. They also left Antoine Winfield in one-on-one, bump and run coverage against Mike Williams of the Bucs and Vincent Jackson of the Chargers. That coverage was aided by safety help up top, but I would think using a coverage scheme like that against Calvin Johnson would be playing with fire. Aside from that, the Vikings also used the formation below to blitz out of on several occasion in both regular season games with varying results. 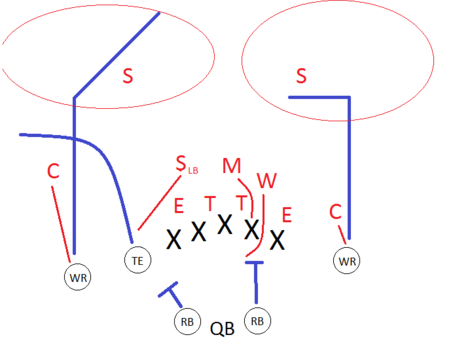 In this play (which can be seen here at the 1:06 mark), the Vikings are seeing pass and decide to bring a two-man blitz, giving them a six-man pass rush and five in coverage. To account for all the blitzing players, the Chargers go max protect, leaving in both running backs to block, and they do a half decent job of picking up the blitz. However, that leaves left the Chargers with only three passing options on the play. Luckily for Philip Rivers, Vincent Jackson gets open on a slant on the left side of the field by simply outrunning the safety and the corner, but he ends up dropping the pass in the end zone. 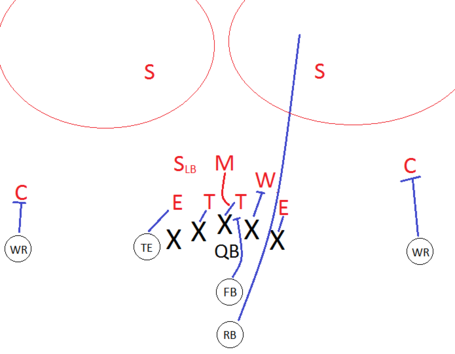 The above diagram shows the same blitz against the Bucs last week (this play can be watched here at the 1:43 mark), except the Bucs were prepared. Seeing a similar type of formation as the Chargers from the previous week (a two receiver, one tight end set), the Vikings call the same two-man blitz where weak side linebacker Erin Henderson comes on a blitz immediately, while middle linebacker E.J. Henderson comes on a delayed blitz. This time, the Bucs run the ball right through blitzing gap and do a great job of blocking everyone in the box. The play results in a 27-yard touchdown run by LeGarrette Blount.

If the Vikings are dumb enough to try the same blitz a third week in a row, I would expect nothing short of a touchdown from the Lions offense. Bringing a two-man blitz is quite an aggressive move, and I actually don’t get why the Vikings would do that when they were up 17-0. Either way, lining up Jared Allen wide left and putting the weak side linebacker in a gap like that should telegraph a blitz to any offense in the NFL.

The other thing you can notice from both plays is that the Vikings safeties are far from elite. In both plays, the safeties had a chance to make a play to prevent the touchdown. In the LeGarrette Blount run, the safety initially takes the wrong angle and never catches up to Blount. In the Vincent Jackson play, the safety is simply too slow to get there. I should note that the Vikings brought the safeties quite close to the line of scrimmage (about 12 yards) on both plays to cover any possible underneath routes, which actually left the deep zone open in the Chargers play.

Now, how to attack the Vikings defense should be pretty apparent: go after the safeties. The Vikings have some good front line players, two great linebackers in E.J. Henderson and Chad Greenway, and two decent corners in Cedric Griffin and Antoine Winfield, but the safeties are a work in progress. If I had to choose my weapon of choice for this game, it would be Titus Young lined up outside and Nate Burleson in the slot. I would love to see those two go against the Vikings nickel corners and safeties.