Breaking Down The Dallas Cowboys Offense

Share All sharing options for: Breaking Down The Dallas Cowboys Offense

After a fast 3-0 start, the Detroit Lions will be taking on the 2-1 Dallas Cowboys this upcoming Sunday. Today I will break down the offense of the Cowboys, while tomorrow’s post will focus on the defensive side.

By now, most of you know that the Cowboys' head coach is their former offensive coordinator, Jason Garrett. Garrett’s NFL career began with the Saints in 1989, when they signed the former Princeton quarterback as an undrafted free agent. After that, he spent the next two seasons out of the NFL before joining the Cowboys in 1993 as their third-string quarterback. He spent six seasons in the Big D, and another three backing up Kerry Collins in New York, until he retired in 2004 (after two very short stints with the Dolphins and Bucs).

Out of all those places, it was probably Dallas that taught Garrett the most. The current Cowboys run the Air Coryell (or vertical/timing) offense, which Garrett learned from then Cowboys offensive coordinator Norv Tuner. There is actually a pretty interesting correlation between the current "West Coast" Offense and the Air Coryell. When the "Air Coryell" was first innovated by Sid Gillman in the 1960s with the San Diego Chargers, it was then known as the West Coast offense. However, as time passed and Bill Walsh came up with his offense, writers started using the term West Coast to describe his offense after Giants coach Bill Parcells mistakenly referred to Walsh’s offense as the West Coast. Thus, the original West Coast offense took the name with the most famous offense of that era, the Coryell offense of the Chargers.

For those of you who are not familiar with the Air Coryell offense, another—more current—name for it would be the Martz offense, which was run in Detroit during 2006 and 2007 and is the current Chicago Bears offense. What most of you probably know about it is that it’s a high octane, timed, and complex offense. While most of that is true, each Air Coryell Offense (ACO) is a little different from one another. For example, the Martz offense doesn’t utilize the tight end the same way the original ACO did and still does like the Chargers with Antonio Gates and the Cowboys with Jason Witten.

Another misconception about the ACO is that it is a very complex offense. While the offense is quite heavy on the quarterback because of the number of plays in the playbook, it is actually quite simple on the wide receiver. Unlike other offenses that often use phrases and words to describe a receiver’s route, the ACO just uses a simple route tree (shown below). This way, all a quarterback has to do is tell a number to communicate a certain route. 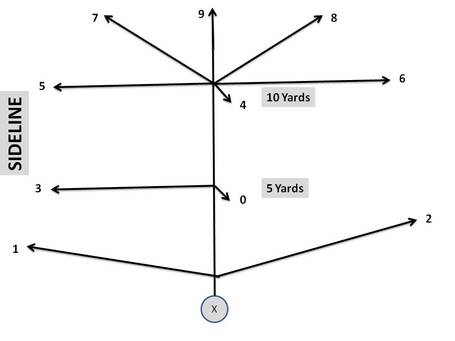 The ACO is basically designed to maximize the number of deep passing plays combined with a power running game. More often than not, the ACO sends two receivers in deep patterns, while utilizing tight ends, slot receivers and running backs to take advantage of the middle of the field during those routes. To achieve all of this, the ACO critically requires a quarterback with a strong arm and a fair level of intelligence, along with a very strong offensive line. Of course, being able to achieve all of this requires plenty of talent and a ton of investment on the offensive side of the ball.

When you look at the Cowboys, you can see that they are built quite well to play ACO football. The Cowboys have two great receivers in Miles Austin (who won’t be playing) and Dez Bryant, a stud tight end in Jason Witten, a decent quarterback in Tony Romo, and a half-decent running game between Felix Jones, Tashard Choice and rookie DeMarco Murray. On the other hand, the Cowboys offense desperately lacks the type of stud offensive line required to run such a scheme. While they have been good so far this season, giving up only six sacks, they still have much work to do.

The offensive line is also my key to victory this week. While the ‘Boys have faced a pair of good pass rushing teams in the Jets and Redskins, they haven’t faced an elite pass rushing team like the Lions. With Miles Austin out already, the Lions won’t have to worry nearly as much about getting burned deep as they would have to regularly. This means that the Lions could bring extra pressure if they deem necessary.  Last week, Cunningham actually brought a few blitzes against the Vikings, which led to Amari Spievey recording his first career sack and the linebackers getting solid pressure on the quarterback. I expect a similar game plan this week.

All in all, I expect the Lions defense to have decent success against the Cowboys, especially after watching them on Monday night. If the Lions can get the already injured Tony Romo out of the game, it would be a huge advantage. On the other hand, it was John Kitna who beat the Lions last year. Overall, I expect the Cowboy offense to put up around 14 to 17 points in this game in a losing effort.