Jared Allen had himself quite a day against the Detroit Lions last week. Allen tallied three sacks and seemed to torment Jeff Backus all afternoon. This came as a shock to many, as the Lions had not given up a sack prior to the Minnesota game. If Detroit had not pulled out the win, Backus would, no doubt, be considered the goat of the game and might have been run out of town (especially considering his play in Detroit's last possession of regulation).

I wanted to look at the three sacks by Allen and see what went wrong and who's to blame. The Lions go up against another premier pass rusher in DeMarcus Ware on Sunday, so these issues need to be solved immediately. 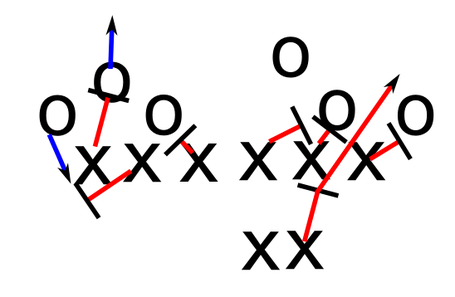 I didn't include WRs, CBs, or safeties because they are irrelevant to my interests. The right side of the line does their job well, although Gosder Cherilus, on the right end, allows his man to come dangerously close to Matthew Stafford, but in the end, he overshoots his target, which is fine.

The interesting part of the play is Brandon Pettigrew, who is on the end of the left side of the line. At the snap, he doesn't move, then quickly releases to block the linebacker on the second level. Unfortunately, the backer is dropping into coverage and Pettigrew becomes a wasted player.

Backus tries his hardest to outrun Allen to the edge, but Allen beats him. Backus is forced to haul down Allen just as Allen is taking down Stafford.

Jim Schwartz said in his press conference that this play was a "snap-count issue." My best guess is that Pettigrew got the snap count wrong (as evidenced by his initial hesitation) and missed out on his opportunity to initially bump Allen in order to give Backus a shot at beating him to the edge. Obviously, I can't be positive of this conclusion, but it seems like the most reasonable explanation for this play. 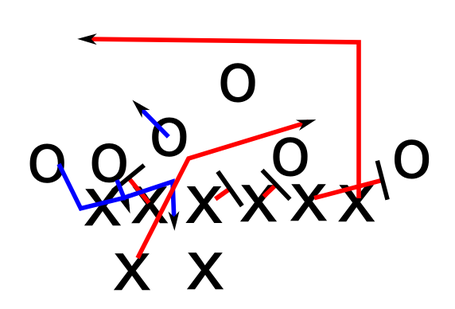 I know this looks a little confusing, but let me explain the important parts. First, Pettigrew is on the opposite side of the line and Jahvid Best is not helping with protection on this play. Both Allen and the defensive tackle are single-teamed. Allen initially fakes rushing around the corner, but when the defensive tackle tries to split Backus and Rob Sims, Allen stunts around them and heads towards Stafford untouched.

This is what it looks like a second after the snap: 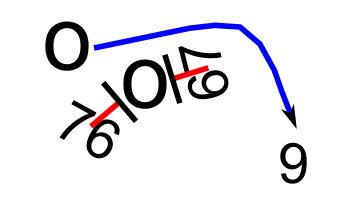 Rob Sims has allowed the defensive tackle to penetrate to a point where Sims will eventually have his back turned to the stunting Allen. Backus initially helps out Sims with the tackle, but he noticeably tries to get to Allen. Unfortunately, he has to go directly through the tackle to get to him and can't. By the time that Sims notices Allen, he's too out of position to get a piece of him. Sack, fumble, drive killed. Props to Jahvid Best for coming back to the play and recovering the fumble. 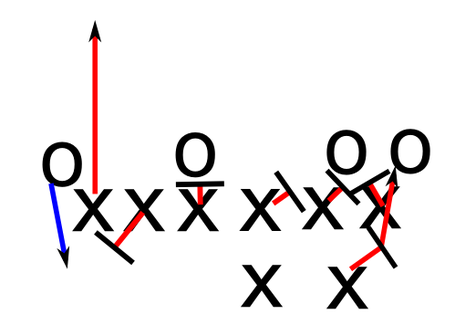 Nothing too fancy here. Pettigrew was lined up next to Backus but was running a route and not supposed to help protect. Backus was just flat-out beat by Allen. This was likely Backus' worst series in his career, having preceded this play with two false starts. Given the circumstance (game being on the line), Backus does deserve a lot of criticism for this play.

However, what is interesting about this play is that if Backus had subdued Allen, it might not have mattered. On the right side of the line, there appeared to be a miscommunication between Best and Corey Hilliard. Hilliard initially looks like he will block the end, but quickly turns to help out Stephen Peterman with the tackle. He must have been expecting Best to get a piece of the end. However, Best was faked out by Hilliard's initial look and eyed the second level for someone to block. Hilliard recovered in time to get a hand on the end, but it wouldn't have been enough to stop him from sacking Stafford.

The good news is that, last sack aside, these problems are correctable. The bad news is that, in my opinion, Ware is an even more elite pass rusher than Allen. Obviously the Lions will be working extra hard to correct these mistakes, but with inconsistent right tackle play, I don't know if it will be enough to keep Stafford upright.